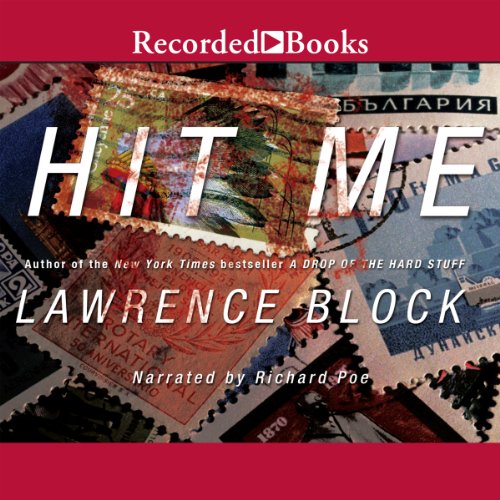 The conclusion of Hit and Run found Keller living in a big old house in post-Katrina New Orleans' Lower Garden District, with a new name (Nicholas Edwards), a new wife (Julia), a new career (rehabbing houses), and a baby on the way. It certainly looked as though he was done killing people for money. But old habits die hard, and when the economic downturn knocked out the construction business, a phone call from Dot draws him back into the old game. His work takes him to Dallas, to settle a domestic dispute; to Florida, where he joins a government witness on a West Indies cruise; to Wyoming, where a widow has her husband's stamp collection for sale; and to New York, where he lived for so many years, and where people might remember him.

What listeners say about Hit Me

Killer of a story!

I have always marveled at Lawrence Block's ability to make reader's like, even love, Keller, a professional hit-man. Yet, Block has done that, through five books in this engaging, and educational, series.

Keller is living in forced retirement from the job of killing people. He has not trouble living an ordinary life, because Keller is, well, ordinary. He has a wife he loves, a daughter he adores and a passion for philately-collecting stamps. And here Block shows his brilliance at telling a story by making philately seem interesting. Amazing, I always thought it oddly boring. Anyway, Keller has been in the building trade in New Orleans but business has slowed. Keller is not really hurting for money. He spends his days with his family and his stamps. Then, unexpectedly, the phone rings. It is Dot, his former handler. The old banter of their long time friendship/partnership resumes. Listening to Dot and Keller talk is as entertaining as hearing Keller ruminate about stamps or how to kill his target. Dot and Keller pick up as if they had not been forced into early retirement. Keller is excellent at killing people, but not because he enjoys it, but because he has a certain work ethic Keller's wife is aware of what her husband does(he saved her life by killing a man and that's how they met) and she is fine with it. Keller accepts Dot's first assignment and just like that, he is killing again.

Don't pass this up, even if you have not read/heard the first four books. Hit Me can stand on its own. Not every series leaves me wanting more, much less praying for more. But I hope and pray for more Keller stories.

I enjoyed the first Keller's stories. They are about the unusual character of a professional killer who spends most of his money in collecting rare stamps. Keller is after all a nice guy (well groomed and low profile), a gentle sociopath who does his job with the mix of duty and boredom of a bank clerk ..
This unusual setup and Laurence Block's good writing skills make Keller stories good for a while, but they clearly start getting repetitive .. It is difficult to add new dimensions to the main character or change credibly the routine of a professional killer... In this last book Keller is married (with a wife who knows of his profession and is also a "nice" sociopath") and tries to make killing a part-time job along with stamps dealing...It is getting boring.
Richard Poe does a great job and kept me awake...

Great return to this series !

I am so glad that Lawrence returned to this series ! I thought that this series was way too short and that he could have gotten much more mileage out of it. As usual great writing and story development. The main character is so rich and ever developing. This is no exception to the series that has Block's normal great combination of mystery and humour. Wonderful as usual. In addition to being a great writer, Lawrence is a great narrator and I am glad he chooses to narrate his own work. I hope that the series continues....encore, encore.

This book is boring....so sad after the three previous Keller tales. The characterization of Keller's wife is beyond ridiculous, and the conversations between the two droned on and on with the most idiotic convolutions that I simply couldn't finish listening.

What could Lawrence Block have done to make this a more enjoyable book for you?

The tediousness of the conversations bored me to death....In the other Keller books, the conversations advanced the story, but, in this book, the dialogues simply made me irritated. The description of the various "hit man" episodes were so minimal that I finally almost fell asleep. In addition, I don't believe the relationship between Keller and Julie for one moment.....her silliness in devising situations to test Keller and her participation in the murder for hire were ridiculous. (I also found it interesting that, on the cruise, Julia and Keller didn't mention their daughter's existence or the fact that they'd left her behind....not normal for the devoted parents that they are portrayed to be.) Interestingly, the philately and the information surrounding Keller's hobby was fascinating and not at all tedious.

Have you listened to any of Richard Poe’s other performances before? How does this one compare?

Richard Poe's ability is excellent...He doesn't attempt to change his voice or use falsetto for female characters, and, yet, I found it interesting that I never questioned the identity of any of the characters.

Did Hit Me inspire you to do anything?

I was so excited that Block had finally released a new Keller book, and this was a huge disappointment. It's almost like he didn't have a good editor to help him with the pacing of this book. If this had been the first Keller I'd read, I would never have attempted another.

I love the Keller series.

it is my favorite series, slightly ahead of the others. I can't find any fault worthy of mention.

Block as Dante and Jung

In my interpretation, the five book Keller series (Keller's Fedora, a novella, is the cherry on top) is a Jungian exploration of a man with an obvious but not all encompassing dark side who proceeds through his life with perhaps more questions than most of us (as a killer for hire, he is unusually introspective) until in book 4 the bottom falls out and he finds himself in the midst of Dante's darkest of dark woods needing to find and accept his inner self and go into the light from there. After reading all five, I began to see the connections Block had laid the foundation for in each earlier work and how he made the connections that leads John Keller to resolution. Read them all; read them in order; reread

Read the bound/Kindle/Audiobook. Last was best!

If you could sum up Hit Me in three words, what would they be?

What other book might you compare Hit Me to and why?

What does Richard Poe bring to the story that you wouldn’t experience if you just read the book?

Does a great job of helping to bridge the divide of dialog vs. introspection.

The moralistic assassin with a great sense of humor.

Wish there was more!

Block never disappoints. for a killer, Keller is certainly a caring person and very likeable.

A collection of stories, mores stamps than stabs

Good narration. Rather slow pace. Not too absorbing with a bit more focus on the stamps than on the action. Feels like a collection of short stories rather than a coherent whole.