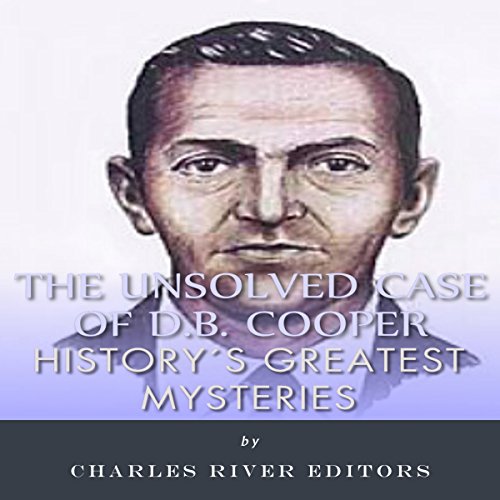 By: Charles River Editors
Narrated by: Violet Meadow
Try for £0.00

"Maybe a hydrologist can use the latest technology to trace the $5,800 in ransom money found in 1980 to where Cooper landed upstream. Or maybe someone just remembers that odd uncle." (FBI Special Agent Larry Carr)

On November 24, 1971, there was little to suggest that the skies above the Pacific Northwest would produce one of the greatest mysteries in American history and a criminal investigation that is still ongoing over 40 years later. However, on the day before Thanksgiving, a man calling himself Dan Cooper boarded Northwest Orient Flight 305 from Portland to Seattle and sat in the rear of the cabin. Shortly after takeoff the man handed a flight attendant warning that he had a bomb and informed her that he was hijacking the plane. Cooper demanded $200,000, several parachutes, and a truck to refuel the plane when it landed in Seattle. Another flight attendant would later inform authorities, “He seemed rather nice. He was never cruel or nasty. He was thoughtful and calm all the time."

When the plane landed at Seattle-Tacoma Airport, Cooper’s demands were met, after which he let all of the passengers and most of the crew off. He then told pilot William Scott to fly toward Mexico at no higher than 10,000 feet and at the slowest possible speed, which would also require a refueling stop in Reno, Nevada. About 30 minutes after the plane had taken off, Cooper manually activated the aft air staircase near the back of the cabin and apparently jumped out of the plane shortly after. The plane landed without any problems at Reno about 90 minutes after Cooper had activated the staircase to exit.

What listeners say about History's Greatest Mysteries: The Unsolved Case of D.B. Cooper

it gives a good run down of the db cooper case. the woman reading it...well, its not good but the story is compelling.