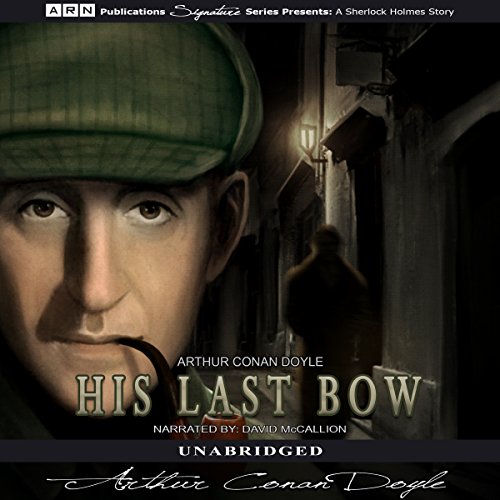 His Last Bow is a collection of eight Sherlock Holmes mysteries, including:

As the title of this series of eight mystery stories, His Last Bow takes place at the beginning of World War I, and a German spy, Von Bork, has been collecting the enemy's military secrets for several years through an Irish American informant. He is waiting for the last piece of the puzzle to be delivered to him before he can travel back to his country and relay the last of his findings. Von Bork will be heralded as a hero to the German army when he gets back; however, when the Irish American informant, Altamont, shows up with the package, things start to get a little strange in the Von Bork household. It is up to Sherlock Holmes to stop these military secrets from reaching the enemy's hands.

What listeners say about His Last Bow

Classic Holmes but not much of a performance by the reader (and a number of annoying mispronunciations).

I love Sherlock Holmes stories, the narrator ruins things here. Very surprised this one got past the QA process.

Hokey smokes, I don't think I've ever read The Cardboard Box before! How did that one slip through? Anyway, while not classic Holmes like Adventures or Memoirs or even Return, there are a lot of great stories here. The Dying Detective, Wisteria Lodge, and The Devil's Foot are the best of the lot. McCallion's narration is odd, making Holmes so laconic that he at times sounds bored by his cases!