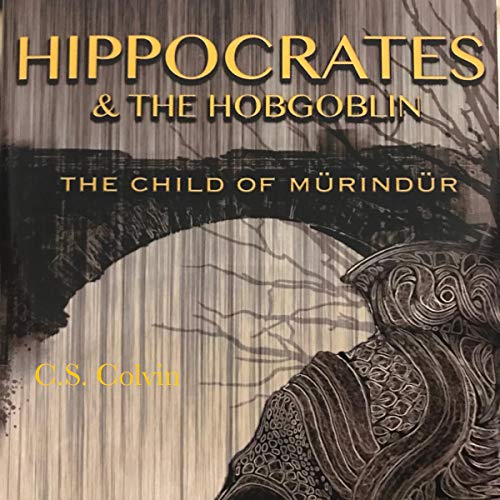 Hippocrates and the Hobgoblin

The chaotic confines of the hospital kept Creed occupied, even as he felt something change within. The embattled physician's dreams were more frequent, and oddities were becoming the norm in an otherwise pedestrian existence.

Following a tumultuous turn of events, Creed awakens in another world, one which he slowly remembers to be his home, as the past and present collide.

Mürindür has been waiting, and within moments of arriving, he is rescued by his hobgoblin friend Ojin, as they embark on a perilous journey to protect Creed's bride and their unborn son, a child of prophecy and purpose.

The world of magical beasts and beings, has been broken under Lord Leterum's cruel conquests and his insatiable army of Caedere. Through the help of his long-lost Luxatio friends, Creed discovers his destiny on the path to restoring order and balance as the Child of Mürindür's time draws nigh.

What listeners say about Hippocrates and the Hobgoblin

Listening to this on my commute the last few weeks has been a joy. The narrators make all the characters vibrant and distinct, keeping you engaged with the story. Highly recommended

Cracking story, made really enjoyable by the narration - a versatile mix of character voices, all of whom have their own unique tone so there’s never any confusion about which character is saying what. Great for fantasy lovers and drama lovers!

A Great Story, With a Fantastic Performance

I thoroughly enjoyed this story and found that the narrator was engaging, but the real stand-out part of Scriven's performance is his ability to inhabit so many different characters, with such a variety of distinct voices. Humfress also provided a great performance. I would highly recommend this audiobook.

Really enjoyed the story and loved both narrators voices. The narrators brought the characters to life which improved my experience massively. It felt like I was there!

I am not usually a big fan of fantasy literature but the story kept my interest and I cared about the characters. Cameron narrated well , his different characters were distinctive and consistent and made them believable.

I have really really enjoyed listening to this book before bed the past few nights. The story itself is well written, whilst the narrator's voice acts as a soothing pilot to the narrative - his tone securely yet emotionally guiding the listener through the author's journey. Would definitely recommend .

Not the best performance

This is a good story but, with all the best will in the world, the performance falls flat. It feels as though an awful lot of effort went into the diction and less into expression. There are times, particularly when events quickens when it gets better and I've stuck with it but it's still disappointing. It could have been so much better. I note, incidentally, that there is only one performers listed when in fact, the book is narrated by Cameron Scriven (male) and an unlisted woman.

This book is one for the Ages! It's a beautiful and powerful tale of love, loss, and redemption within the rich tapestry of an epic fantasy. Murindur is a world unlike any other, and this audio book brought it all to life! I loved the narrator's voice, and the interactions between the characters with all their varying accents was exceptional! The emotional tension through the fight scenes, and the moments between Creed and Celeste were palpable in the actors' voices. I highly recommend this to anyone who loves to get lost in a world of magic and heroism as robust as Lord of the Rings or Game of Thrones!

I thoroughly enjoyed this story, with deep characters and intense emotional development throughout. The voice acting made listening a true pleasure and mental escape from reality. Looking forward to many more stories.

Can't wait for the sequel!

High praise to the author for creating an entirely new fantasy world. Some of the creature descriptions are quite haunting and unique, which I think is genuinely hard to do these days. It kept me engaged and I finished the whole book in two days because I couldn't stop listening. The male narrator did a great job with all the voices and accents, which reminded me a bit of the Hobbit or LOTR. Looking forward to more adventures with Creed and Ojin!

This is an amazing story with some real world inspiration that dives deep into how we treat those with mental Illness and creates an epic tale in an amazing new world where action, fantasy, and adventure are the rule. The characters are relatable and well written and will capture your heart. This story is for every fantasy fan.

A great listen for fantasy lovers!!

As a heavy audiobooker (266 books over the past few years), I must say that C. S. Colvin’s creation is one of my favorites! Riveting fantasy tale aside, I was intrigued by the perspective and internal monologue of a distressed frontline healthcare provider! Take I for a spin, you won’t regret it.

It’s hard to find a place to stop listening!!

I read the book first, and anxiously awaited this audio version. This book speaks to anyone who has ever felt loss and bothered by the injustices of life. The fantasy aspect rivals that of other well known novels, something about Lords and Rings... typically not my preference in entertainment. To me, the fantasy element is just a way to make sense of the world we all live in. (Read/listen and you’ll understand what I mean. There is a glossary at the end of the book, which is a great tool, by the way, and one I didn’t discover until I reached the end of the book. ) This book explores PTSD and mental illness in a beautiful way that evokes empathy by the reader who has seen or experienced such firsthand, but for the readers who haven’t had such experiences- it gives the opportunity to understand something in a whole new way. This book is as thought provoking as it is entertaining. It is the first of a series, and I can not wait for the next installment. I had the privilege of working with the author, who is an ED physician, in a Level I trauma center, so for anyone with a medical/hospital background, especially in an emergency department, the authenticity of this book is a treat of sorts. It takes on the broken souls we see daily, as well as exploring how we as caregivers react to it, and what drives us to do it.