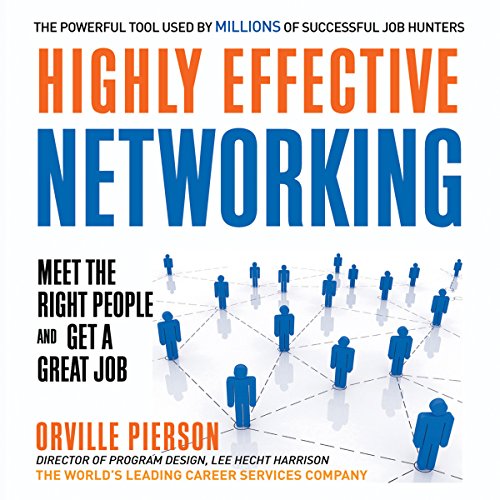 Meet the Right People and Get a Great Job
By: Orville Pierson
Narrated by: Jay Webb
Length: 7 hrs and 4 mins
Categories: Business, Career Skills
3 out of 5 stars 3.0 (2 ratings)

Virtually all job hunting experts agree that networking is the best way to find a great job. But most people don't have connections to the decision makers who do the hiring.

And "networking" books, which are mostly written by and for salespeople, suggest aggressive tactics, often confusing these with real networking. They focus on building a powerful network over the course of a lifetime. But when you need a new job, you don't have time to build a huge, powerful network. You've got to use the network you already have.

Orville Pierson, a top expert in job hunting, tells you how to succeed by effectively using your current circle of contacts. He cuts through the myths and misunderstandings to show you how millions of job hunters have networked their way to great new jobs.

Highly Effective Networking empowers you to:

Networking in job hunting is different than other networking. You don't have to hobnob with the rich and famous. There's no need for aggressive sales tactics. You just need to understand how real networking fits into your job search, and then be systematic about doing it.