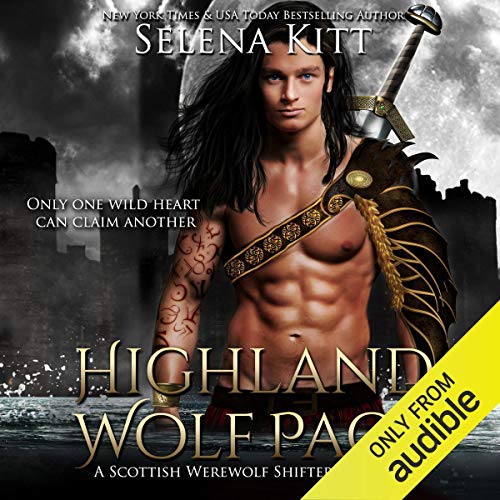 Sibyl Blackthorne isn't afraid of anything - except maybe being sold into marriage to a man she doesn't love. A man she's never even met. A man who, by reputation, is one of Scotland's cruelest lairds in over a century. But what choice does she have, with her father dead and her uncle now married to his brother's widow, putting him in charge of not only the Blackthorne fortune, but Sibyl's future as well?

Then her betrothed turns out to actually be far worse than his reputation, so headstrong Sibyl decides life as a peasant, or even death, would be preferable to a future with such a despicable man, and makes plans to run away.

On an organized hunt for wolves - or, as the Scots call them, wulvers - Sybil escapes her fiancé's clutches, only to find she's run into something far more untamed and dangerous in the middle of the woods.

When a big, brawny, long-haired man, who only speaks to her in Gaelic and calls himself Raife, simply picks her up and carries her off with him into the Scottish wild, Sibyl knows she's in trouble.

When he takes her to a place no human has ever been, she knows she's gone over the edge. And when he, at last, marks her as his own, she discovers that only one wild heart can claim another.

Note to Listeners: This is the extended version with new material and a bonus epilogue and preview of the sequel!

Just saying ... chipmunks and coyotes are NOT native to the British Isles - it is a pet peeve of mine when American writers do not do their research.

Oh what a great book!

Would you consider the audio edition of Highland Wolf Pact to be better than the print version?

As I haven't read the printed version, therefore I can't possibly comment.

What other book might you compare Highland Wolf Pact to, and why?

I don't know of many books like this one, hence this review ... From the beautiful Scottish accents to the wonderful story.

He was able to bring the many characters to life from the pomp and selfishness of the Laird Alistair M. to the fiery passion of the many Wolvers. My only negative comment about Dave Gillie was the lacking of clear Yorkshire accent of the character Lady Blackthorn, however, it passed as I fell into the rich tones of the Gaelic language.

It is said that if He is truly Blessed ...Standing alongside a great Man is a Strong and Passionate Woman.

One of the reasons I enjoy listening to books on Audible is the added dimension the narrator can bring to a book. There is a richness, texture and a sense of moving along with the characters in this story that's being narrated.This book is truly a surprising, well written, well thought out and a well read book, I'm hoping that the next installment of this series comes to Audible very soon. Please please please!

It's not often I come across a story that combines both historical and paranormal romance into one captivating story and even better it contains two of my favorites, sexy Scotts and wolf shifters! I also liked these shifters or wulvers, were not perfect. They lived deep in the mountain, and the female wulvers had the moon curse and were forced to stay in their wolf forms during certain cycles.

This was a decent story and the attractions between Raife and Sybil was instant. I look forward to the next book in the series.

Wow, what an incredible story. This is my first book by author Selena Kitt, but it won’t be my last. This story is so good, I am anxious for another book by this author. I was hooked immediately and didn’t even want to turn this audiobook off to go to sleep. The story captivates you instantly and keeps you on the edge of your seat until the very last word.
This is a must have!
Narrator: I am a huge fan of Dave Gillies. I could listen to him narrate with his Scottish brogue all day. I do think he needs to work on a proper English accent for future narration. He performed Lady Cybil’s character with a lower class English accent. If the character is from an aristocratic family, she does not have a Liverpool dialect. But don’t let this minor comment distract you from getting this audiobook. Dave Gillies is still one of the best narrators I’ve had the privilege of listening to. The emotion and performance he delivers is outstanding. He brought the story to life.

There's action/love/character build up/romance. What more can you ask for? I never got bored. The narrator does a wonderful job, really pulls you into the story. I can't wait for the next books to be released on audible!

This book is ridiculous. I tried, I really did. In 8 years this is only the 2nd book that I could not force myself to finish listening to. The story sounds as if it was written by a 13 year old. The writer contradicts herself with every other sentence. It’s just the worse....not much more I can say other than I warned you.

Loved the book. The story line kept my attention. The narrator was amazing! He had that Scottish brogue which helped make the story more real.

Great book! It’s so good to hear authentic accents and folklore that you’ve read before and know it’s factual. ( to a point!). I really enjoyed this audiobook.

Story was interesting. Cool idea, but for me I could not get past the narrator. The female voices were poor. The reading seemed stilted. Doubt I will go further but at least it was part of the escape package so it didn't cost me a credit.

I lost interest a few times but the story wasn't too bad. eventually I'll read another from the series.

1500’s in England and Scotland...arranged marriage to maintain or gather power.
Syibel’s father has died, her uncle married her mother, and she is being sent to Scotland (she is English) to marry a laird and bring ongoing peace to the border. The laird is cruel and she soon realizes she can’t go through with the marriage.
Out on a hunting party they come upon a white pregnant wolf trapped in a cage and the laird is determined to kill it.
Sybel saves the wolf and also is confronted by a Scottish man who wishes to save the wolf. In a bid to escape the laird Sybel leaves with the man, who turns into a wolf, and the white wolf. The shifter is Raine, king of the shifters....so begins the introduction to the shifter or wulves lives and the relationship of Sybel and Raife.
The story was action, mystery, suspense, faithfulness, loyalty, war..everything possible excitement and the build of a romance.
Loved the story. The narrator was fantastic, except the women’s voices, esp. Sybels’s...he would have been better off not making her voice so high...sounded too fake and irritating.
Would love the next books in the series to see what happens.

Sibyl Blackthorne was young and innocent. She was her father's only child. She was the boy he never had. He loved her and prepared her for a future she never could have imagined living in. Ralfe had seen her from afar. Ralfe sezies his chance to have the one that he wants. The one fated to be his. The one that could tear his pact apart.

The story was interesting, but something was missing. I was lured in but not completely captivated. The narrator did a fabulous job. I was held by his voice. The audio was smooth, clear, clean, and inviting. I think most of all it was his voice the had me continue on to the end.