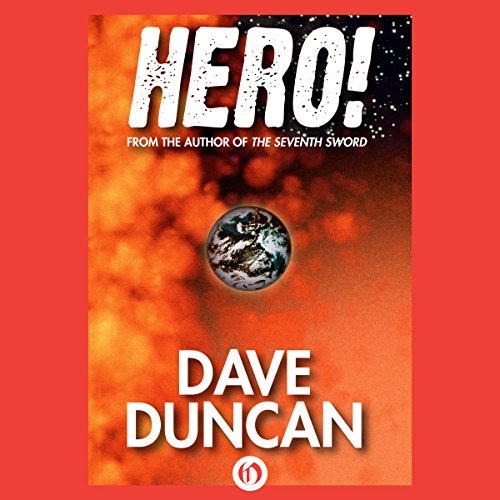 Space opera at its finest and most action-filled, from the best-selling author of fantasy quests, epic tales, and swashbuckling adventures.

Vaun, born a peasant in the stinking mud flats of Ult, a thriving colony planet, claws his way to survival and fame by becoming the toughest young officer in the Space Patrol. A veteran of the brutal training academy, he seizes opportunities as they arise, leading the first ship out against a surprise attack by the mysterious Brotherhood. He returns to a hero's welcome as the Brotherhood ship falls to the surface of his home planet in shattered pieces.

The Brotherhood is elsewhere unstoppable, though, as neighboring plants, one by one, fall silent, conquered. And then, the Patrol detects a huge spacecraft launched from one of the now-silent worlds and headed for Ult.

Facing a challenge greater than he can truly hope to overcome, Vaun nonetheless sets out to save Ult for a second time....

What listeners say about Hero!

I only bought this because of the narrator. It was an ok story but must have been a little hard for the narrator to read. Sometimes the logic does not hang together. I get no sense of the future society in the story. Apart from hearing about Q Ships and some other minor things it was hard to see this as a story set thousands of years into the future. The motivations of the characters sometimes seems silly too.Not sure I would tell my friends to spend money though.

What other book might you compare Hero! to and why?

SLAN by Kurt Vonnegut was a lot like this. It was the same sort of story (Mutant race taking over and being persecuted)

What about Jennifer Van Dyck’s performance did you like?

Ms. Van Dyk's voice has a special voice. Hearing her made the book more interesting. Maybe its is because I enjoyed her performance in the Jack McDevitt's Alex Benedict Novels. I absolutely refuse to buy Echo until she reads it.Double her salary :)

The plot is a little thin but today's movie audience would go for it. Lots of emphasis on sex and violence seems to attract today's movie goers. They would probably miss the underlying story. It would sell but I would not go.