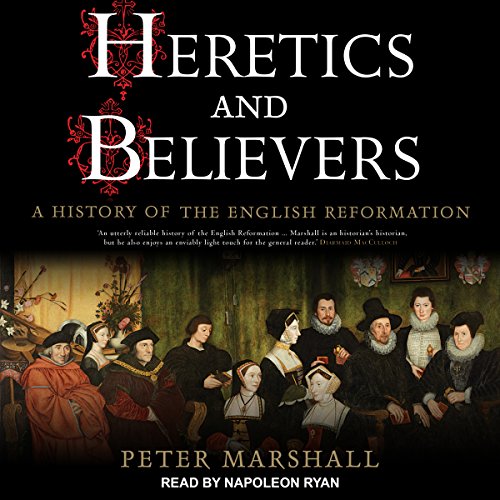 By: Peter Marshall
Narrated by: Napoleon Ryan
Try for £0.00

Centuries on, what the Reformation was and what it accomplished remain deeply contentious. Peter Marshall's sweeping new history argues that 16th-century England was a society neither desperate for nor allergic to change, but one open to ideas of "reform" in various competing guises. King Henry VIII wanted an orderly, uniform Reformation, but his actions opened a Pandora's Box from which pluralism and diversity flowed and rooted themselves in English life.

With sensitivity to individual experience as well as masterfully synthesizing historical and institutional developments, Marshall frames the perceptions and actions of people great and small, from monarchs and bishops to ordinary families and ecclesiastics, against a backdrop of profound change that altered the meanings of "religion" itself. This engaging history reveals what was really at stake in the overthrow of Catholic culture and the reshaping of the English Church.

What listeners say about Heretics and Believers

The best book on the subject I have read.

I have read several books on the subject of the Reformation, and this one is by far the best. The author presents the facts, and the characters involved, in a completely impartial light - very unusual when it comes to this particular subject matter. The story is told with wry humour, perfect in the context of our very particularly English Reformation. I didn't want this thought provoking book to end. The parallels with our modern post-EU Referendum society are striking. Napoleon Ryan's narration is perfect and makes very easy listening.

Person who reads the book is terrible

Person who reads the book is terrible, too annoying to listen to, so I didn't

Very interesting and informative. Struggled with the narrator. Liked how he changed his tone when referring to referenced narrative. Disliked his overall/general narration. Sorry to say he sounded like he was computer-generated.

Narration is heavy going but book is excellent!

The book is excellent, but the narrator sounds like an old fashioned film trailer, bassey and overly dramatic, make him hard to listen to.

Narration so poor I had to give up. Tortured vowels, emulating Donald Sinden, very actorly with little sense of what was being conveyed.

Informative, consistent, credible and delivering a powerful insight to the critical period of English history.

Having been taught by Peter Marshall at university I was happy to enjoy more of his thought provoking insights on his specialist topic. The narration is arguably somewhat annoying but each to their own, I suppose.

A heavy read but well worth it.

How not to Read a Book Aloud

The worst reader I've ever heard on Audible. He cares far more for the sound of his own voice than he does about conveying the meaning of what he is reading.

well researched but with significant gaps

A comprehensive and well researched analysis of the English Reformation. However it suffers from too narrow a focus with too much emphasis on the clergy and policy makers of the time and very little on the faith of the common people. It glosses or summarises too briefly the violence that ensued and its consequences. It does not touch on the English Reformation's most famous export, the american colonists. Overall the book's heavy reliance on primary sources is to be commended but I recommend it solely for those studying history and theology.

I believe in the context of this book!

Well written, researched and delivered. May the world understand why Henry chose to break with the Pope and become the head of the church. No it was not just the kings great problem!

Expansive academic study of the leaders

Excellent detailed sociological, political, and religious history of the strange upheaval of the 16th century showing its tragic, often immoral and unjust nature. How well-meaning humans dutifully caused much horror in the name of Christ.

This was a well written and well researched book, but I think for anyone without an intense interest in the subject or an academic motivation it might be dry and a long read. I wanted an overview of the English Reformation and this book provided that but it was not as enjoyable and I didn’t get as much out of it as I hoped.