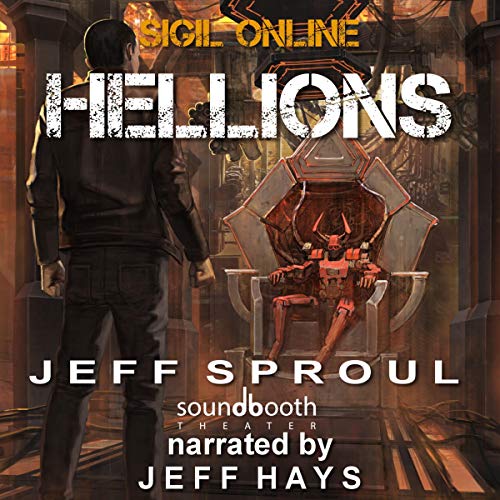 For Riley and his friends, Sigil Online has never been more real. With the latest expansion, pain has been enabled and will now affect all players in-game.

Aptly named "Hellions", the expansion introduces monsters, but not the kind that paragons have been fighting for the past several years. This time, players can be the monsters they once sought to destroy. But in a game where playing means having the money to survive in the real world, what will Riley do when death in the game doesn't just mean an end to his character, but an end to his life?

What listeners say about Hellions

Hellions is a fun, fast paced, leg breaker of a bo

I did have some issues with the game mechanics in the first book, which you can read in my review for that book, and they are still here in this book, but having finished the first book, it doesn't hit so hard in this one.

Anyway, this book picks right up from the first one, and dives right into a mess of issues for our characters. Riley is finally getting himself situated to do more that just buff and heal his comrades, and is actually mixing it up with the villains now.

The pacing is great, the fights are fun, and it gets better every chapter. I really think Mr. Sproul has hit his stride as an author. The book is fun, and I will happily get any more that Sproul writes. Jeff hays, as always is a master vocalist, and only adds to the story with his characterizations of a cast of dozens. The dude has Jedi voice powers, like totally . . ."these aren't the droids we are looking for", kinda stuff. Story, performance, and the other skittles are just great. Read it, you'll be glad you did.

Glad the dying thing doesn't seem like it will be

glad the chances of the players really dying isn't as likely to be an issue in the subsequent books. I am not sure I could believe every player still deciding on playing willingly with those risks.

while I liked the book I 3 star score is based on the fact that this game sucks it would have to be the absolute only game out there for me to ever want to play it. And, the fact that you might actually die is not a part of that decision. It's imbalanced and poorly thought out. It seems that as a hellion you have powers of the back and are able to level up faster and become powerful enough to evenly face five paragon of you same level. In real life no one would remain a Paragon because there weak and take too much to level and someone who started play a hellion a month ago can easily come by an kill you with out braking a sweat destroying your character of 5 years lol. Sorry but that's f-ing stupid. There would be no Paragons. Because Hellions are way too OP'd. I just don't see how that expansion is going to help that situation. Maybe the author doesn't even see the problem. Also that game would have been shut down after the first death. They would have been sued into Oblivion user agreement or not.

Hell of a trip!

Jeff squared knocked it out of the part with this one.


Jeff Hays delivers another amazing performance. I am constantly impressed with his range of voices and skills at delivering them in such a believable way. I especially love the voice and characteristics that he used for the White Weevil.

Jeff Sproul provided a bunch of great content to work from and I highly enjoyed the book and the audiobook!

hell of an expansion

the game expands, there are gains and losses but i definitely want to see where things go.
cant wait for book 3.

Interesting, yet lacking an actual plot

I love the universe Mr Sproul has created and I have enjoyed his other works, especially hero of thera and the first book of this series. This book just seemed to wander. I enjoyed the hellions, however they didn’t expand or move the plot along. Jeff hays as usual did a great job narrating.

loved it great telling from sound booth as normal but the story was so much better!

this was another fantastic experience. I went through this even faster then the one before! can't wait for the next

Didn't like the plot. started good but by the end it just got basic. Things made less sense and there was a lot left Un resolved. in addition, a lot of the stuff didn't feel feasible, realistic, or good.

not as good as the first. felt that the story was rushed along and not as much fleshing out of characters was done. sad as I really liked the first book.