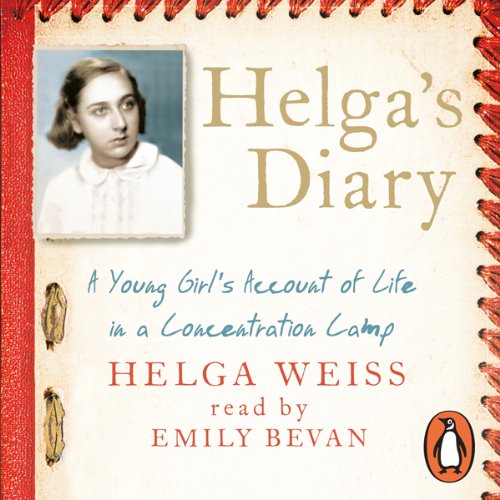 By: Helga Weiss
Narrated by: Emily Bevan
Try for £0.00

p> The unabridged, downloadable audiobook edition of Helga’s Diary: A Young Girl’s Account of Life in a Concentration Camp, by Helga Weiss. Read by the actress Emily Bevan.

In 1938, when her diary begins, Helga is eight years old. Alongside her father and mother and the 45,000 Jews who live in Prague, she endures the Nazi invasion and regime: Her father is denied work, schools are closed to her, she and her parents are confined to their flat. Then deportations begin, and her friends and family start to disappear.

In 1941, Helga and her parents are sent to the concentration camp of Terezn, where they live for three years. Here Helga documents their daily life - the harsh conditions, disease, and suffering, as well as moments of friendship, creativity, and hope - until, in 1944, they are sent to Auschwitz. Helga leaves her diary behind with her uncle, who bricks it into a wall to preserve it. Helga’s father is never heard of again, but miraculously Helga and her mother survive the horrors of Auschwitz, the gruelling transports of the last days of the war, and manage to return to Prague. As Helga writes down her experiences since Terezn, completing the diary, she is 15 and a half. She is one of only a tiny number of Czech Jews who have survived.

Reconstructed from her original notebooks, which were later retrieved from Terezn, and from the loose-leaf pages on which Helga wrote after the war, the diary is presented here in its entirety. As such, Helga’s Diary is one of the most vivid and comprehensive testimonies written during the Holocaust ever to have been recovered.

What listeners say about Helga's Diary

Written from Helgas childlike point of view you have to read more into the situation as an adult but that makes it all the more moving.

Loved this book from start to finish. Made me feel like I was there living every second

Fabulous story gives insight into the personal experience of the concentration camp and what happened to this young lady and how she put the past behind her. Truly heart rendering

I enjoyed listening to this recollection seen through the eyes of a young girl the small details bring the story to life very harrowing very sad but also so filled with love strong human spirit and the will to live through one of the most horrific times in humanity.

well read, such a sad story but so interesting to try and understand even an inch of what they went thought

An amazing account of a young girl in the concentration camps very interesting and moving beautiful read.

What can one say

Who says you can’t live without the internet?

There are vain people who scream that they can’t live without social media, mobile phones, make-up and so on. Well there people managed for five years to live without even the word freedom to sustain them so this book is yet more proof that vanity is something we’d all be better off without. On the book itself well, I never feel quite comfortable about judging a personal account of something that really happened but for once here’s an account which is harrowing of course but also upbeat and full of the thoughts and genuine feelings of a mere child forced to grow up before her time. It pulls no punches and at first you think of it as just a good whinge but actually it’s not. It’s a decent first hand account of all the emotions involved in being in prison and making the best of it. The optimism and the despair are here and it’s really well read too capturing all the emotions that Helga really felt and I’m glad there are people around that wanted to publish their accounts though I wonder where she got the paper from and the time to write this diary which I will admit at first seems a bit disjointed but then diaries often do. I enjoyed it though but it might have been nice to learn whether her parents survived or not. I think they may not have done, I hope though that they did.