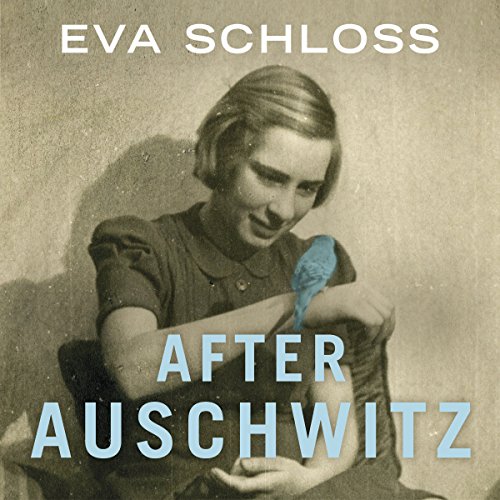 A story of heartbreak and survival by the stepsister of Anne Frank.

Eva was arrested by the Nazis on her 15 birthday and sent to Auschwitz. Her survival depended on endless strokes of luck, her own determination and the love and protection of her mother, Fritzi, who was deported with her.

When Auschwitz was liberated, Eva and Fritzi began the long journey home. They searched desperately for Eva's father and brother, from whom they had been separated. The news came some months later. Tragically, both men had been killed.

Before the war, in Amsterdam, Eva had become friendly with a young girl called Anne Frank. Though their fates were very different, Eva's life was set to be entwined with her friend's for ever more, after her mother, Fritzi, married Anne's father, Otto Frank, in 1953.

This is a searingly honest account of how an ordinary person survived the Holocaust. Eva's memories and descriptions are heartbreakingly clear; her account brings the horror as close as it can possibly be.

But this is also an exploration of what happened next, of Eva's struggle to live with herself after the war and to continue the work of her stepfather, Otto, ensuring that the legacy of Anne Frank is never forgotten.

What listeners say about After Auschwitz

This was not expected to be an easy listen but it was worthwhile. There were many engaging and heartfelt memories along the way to a very creative and positive use of experience.
I found myself slightly depressed occasionally by the readers tone, which led to a jarring re-cognition that it was not the author. Something in the writing tells me the author has more lively manner, naturally.

Everyone in the world should know at least one holocaust survivor's personal story. This book is life changing, important, and of course deeply heartbreaking.

best read of my life

I have read a lot of books in my time, but this out and out is the best one I've ever read/listened to. extremely emotional and tough to digest at times, but as they say, the truth hurts.
an absolute eye opener, and I feel everyone in the world SHOULD read this book

A very emotional, moving and real account. I have listened to many books about the holocaust but this really touched me and was especially interesting to hear another side of Anne Franks and their stories after Auschwitz as so many memoirs end after liberation.
Very well read too. I highly recommend

I wish I had the eloquence to express my opinion of this book in a way that does it more justice than "it was mesmerizing"... but it really was!

A terrific story, I am glad I read it.

This is a captivating personal memoir of a person about whom I previously had no knowledge, despite her having traveled the world for years as a speaker & working to educate about the Holocaust, with the goal of positive legacy. The narrator is excellent & I had to keep reminding myself it was not the author herself. As a child, Eva was a neighbor & buddy of the famous Jewish diarist, Anne Frank, who perished in a concentration camp during WWII. After the war, Anne's father, & Eva's mother, married. The memoir, covers way more than that particular aspect of this lady's story, from her ancestors up to its 2013 publication. The author is still living in England @ 90 years old.

Captivating and Timely for Today's Generation

I read this title on Audible for our book club selection and appreciated the fact that the author includes both historical context as well as emotional context. I had no trouble wanting to reach the end of the book as both the author and narrator left you wanting to hear more. I find this book very prevalent for today's generation. If we want the youth of today to prevent this from happening again, we must teach them regardless how painful the lesson, and we must not sugar coat it. This book would be a captivating read for both the young pre-teen and older generations as well. Well done on both the part of the author and the narrator.

This book is so enlightening of what happened after Otto Frank and how he carried on after Anne was murdered. In my opinion that is what happened during this dark time. Mass murder. If you love history and especially WWII a must read.

This story is very important and very powerful. I hope many people in the future read this powerful story of deep loss, survival and hope.

I’ve always been interested in WWII history, and more specifically, Jewish history. This book was easy to get into and easy to keep listening to. Def worth the read/listen!