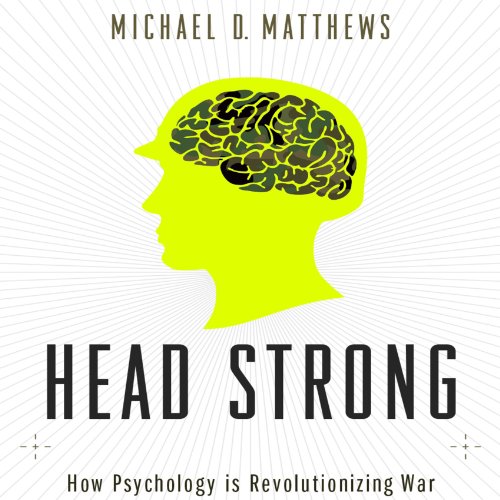 By: Michael D. Matthews
Narrated by: Basil Sands
Try for £0.00

Psychology is the science that will determine who wins and who loses the wars of the 21st century, just as physics ultimately led the United States to victory in World War II. Changes in the world's political landscape coupled with radical advances in the technology of war will greatly alter how militaries are formed, trained, and led. Leadership under fire - and the traits and skills it requires - is also changing. Grant, Lee, Pershing, Patton - these generals would not succeed in 21st century conflicts. In Head Strong: Psychology and Military Dominance in the 21st Century, Michael D. Matthews explores the many ways that psychology will make the difference for wars yet to come, from revolutionary advances in soldier selection and training to new ways of preparing soldiers to remain resilient in the face of horror and to engineering the super-soldier of the future.

These advancements will ripple out to impact on the lives of all of us, not just soldiers. Amputees will have "intelligent" life-like prosthetics that simulate the feel and function of a real limb. Those exposed to trauma will have new and more effective remedies to prevent or treat post-traumatic stress disorder. And a revolution in training - based heavily in the military's increasing reliance on immersive simulations - will radically alter how police, fire, and first-responder personnel are trained in the future.

At its heart, war is the most human of endeavors. Psychology, as the science of human behavior, will prove essential to success in future war. Authored by a West Point military psychologist, this book is one of the first to expose us to the smarter wars, and the world around them, to come.

What listeners say about Head Strong

More actual information on how to deal w/ soldiers and their problems. This book came of as a public relations effort for psychology in the Military. As I am already sold on this it had limited usefulness.

Would you ever listen to anything by Michael D. Matthews again?

I would consider some of the titles he mentioned

The book he was reading

There were some useful information about the history of the problem.