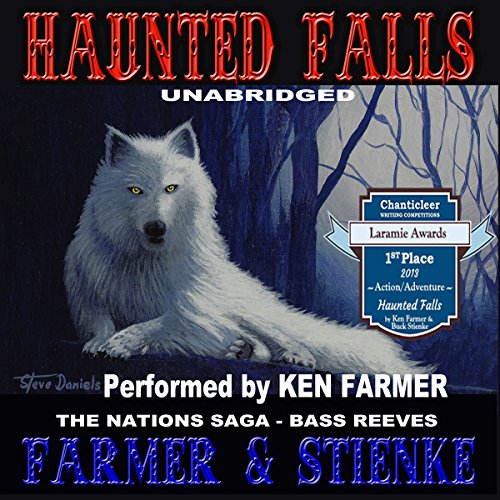 If you are a fan of L'Amour, Kelton, Burroughs and Grey, you'll love Haunted Falls - the much awaited sequel to the best-selling The Nations as it brings to life the American frontier!

United States Deputy Marshals, under Judge Issac Parker, The Hanging Judge, patrol the Indian Nations-the most dangerous place in the world in the late 19th century.

Marshal Bass Reeves long time partner, Jack McGann, goes undercover to ferret out some claim jumpers in the Arbuckle Mountains. He is bushwhacked and washed down the rapids and over Turner Falls. A restless spirit and a sacred white wolf send a fiery redheaded widow to nurse him back to health. Bass and his other partner, Jed Neal are sent to find the missing McGann, but are sidetracked into helping US Deputy Marshal Selden Lindsey track down Bill Dalton, the last of the old time outlaws. "Son, I only warn once…you best step aside whilst you still have a chance," Bass said softly. May God have mercy on the outlaw's souls, because the US Marshals Service and Judge Issac Parker will not. Spirits, thrills, action, Indian lore, danger, treachery, romance, tragedy, humor, the supernatural and surprises! It's all in Haunted Falls. Time to saddle up!

I loved the wolf! The ending, a nice touch. Can't wait to hear next book!

You have to have faith that somethings are real

This western is well written and I enjoyed it so much I bought the series. My brother warned me about Westerns, as a truck driver he said you would get hooked. He was right, so I still read other books but I start with a western series I HAVE to finish a good one.

The plot is different with a few twist and turns not in the run of the mill western. Made for great listening

Have you listened to any of Ken Farmer’s other performances before? How does this one compare?

Yes, some of the humor was great, and the part about the lost soul of a child was alittle tender

I have purchased the rest of the series and look forward to reading all of them A great listen so far.

If you could sum up Haunted Falls in three words, what would they be?

The way the authors draw the listener in with authentic dialogue for the period. As well as the fact it is based on the life of a real American hero, Bass Reeves. So much of what is in the book is easily researched to document the writers molded their story around the man and his life.

Great voice! The listening experience is flawless as he takes the listener on a barn burning ride through the time period, The Indian Nations. It is the best audio western book I've listened to so far. Really looking forward to his next one.
Ken is a real professional who brings a ton of western experience to his audio books. He's the real deal having walked the walk and talked the talk on film and in real life as a Texas Cowboy. There's a difference between being a voice talent from New York City and a real Texan. It is evident in his audio work.

The loyalty of the wolf. I was hooked by that aspect of the story more than any other.

I highly recommend all the published print westerns by Ken Farmer & Buck Stienke, as coauthors and for their solo work. I am solidly hooked on the audio versions and look forward to the next release.

Good representation of characters, with lots of twists and turns. I totally enjoyed this story, and will be getting other books bt this author.