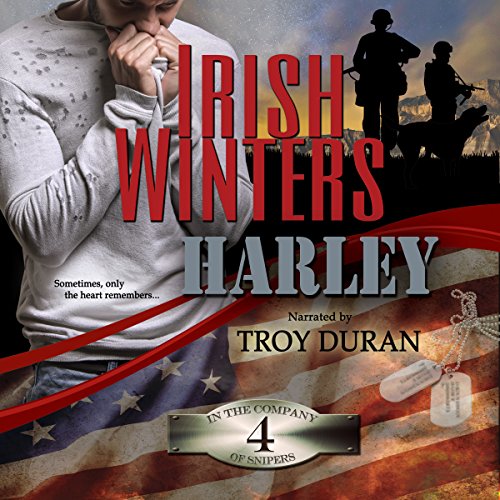 He's in the fight of his life.

Suddenly back in Iraq, US Army Corporal Harley Mortimer searches for the men he left behind in a world where guilt never lets go and nothing seems real. Dead men talk and die over and over again. There is no peace or rest. Only war. Only despair. Only didn't he survive this exact scenario once before? And who the hell is Judy?

She is a force to be reckoned with.

Judy O'Brien's future is planned and perfect until Harley, the man she intends to marry, goes missing. Mysteriously, Kelsey Stewart disappears the same day. He and Kelsey have a shared history, but do they love each other - that way? Worse, is he the murderer the FBI claims? Judy must come to grips with the man she thought she knew. And all of his secrets....

What listeners say about Harley

I have been really looking forward to this book as Harley has been one of my favorite characters from the series. It was worth the wait! This is such an emotional story; have tissues on hand for this one. My heart went out to Judy and found her love and patience admirable, though at times I thought she was a bit harsh with Harley. Harley is reliving a traumatic time in his life and is having a difficult time knowing what is real or not. Kelsey also goes missing in this book and this part of the story is also heart wrenching. As I said this is an emotional book, however well worth listening to. I love this series and hope it won't be too long until the next book is on audible. Troy Duran always does such an amazing job bringing the story to life.

I found this book to be very gripping. The story dealt with PTSD, serial killers, and being in love. This book had low steam. The narrator did a fantastic job with conveying emotions of the characters. At times I found it distracting how the story would jump around to flashbacks and different characters. This book is part of a series and is a standalone book. I was voluntarily provided this free review copy audiobook by the author, narrator, or publisher.

I love everything about this book.

This has everything. It is touching. Exciting. Dangerous. Steamy. Has team/family loyalty. The author takes the lives of military people and shows us the life they have to adjust to after returning from protecting our freedom.
Harley has a traumatic brain injury TBI. He has memory loss and other issues. When an accident pushes him into the past his team is searching for him along with Judy the woman who loves him. Yet, she wasn't his past. Does she exist in his new present?
Meanwhile, the wife of the company owner's wife is kidnapped. So much happening. So many people who care--oh yeah, the team has been hired by the FBI to find a serial killer in DC--with their hands tied.
The narrator is spectacular. There is nothing about this but the highest praise for story and audio.
My strongest recommendation.

This is not normally something I'd read (or listen to) but I received a copy of this Audiobook for free and decided to give it a go.

Troy Duran was the perfect narrator for this book. 5 stars to him.

Filled with suspense from start to finsh!

Would you listen to Harley again? Why?

Absolutely because it was a fantastic story.

Harley - because I couldn't help but get sucked into his situation.

Have you listened to any of Troy Duran’s other performances before? How does this one compare?

This is my first time listening to him, but it will not be my last!

I am new to Irish Winters and after experiencing Harley (In the Company of Snipers) I will certainly be reading more from her. From the very start I was drawn in. There were several story lines intricately woven into this one book that I just had to know what would happen next. I loved that it told a complete story, while weaving several different story lines into one fantastic book. I found myself not wanting to put this down and when I had to, the characters stuck with me until I could get back to them. Irish Winters created a world that I immediately felt immersed in. The characters were real and believable and written in a way that I cold.

US Army Corporal Harley Mortimer is thrown back into his days being deployed in Iraq after experiencing trauma. All his brain seems to do is be on a continuous loop of the men he lost. He can't seem to wrap his mind around who Judy is either.

Judy O'Brien is a trauma nurse who has her live planned out perfectly, until the love of her life disappears the same day Kelsey, Harley's boss' girlfriend does. The two have a tangled past. This alerts the FBI and everything seems to fall apart from there. Will her life ever be the same again?

After experiencing this fantastic story, it makes me want to read more from Irish Winters. I fell in love with many of the characters in this book and would love to know their backstory as well. I am looking forward to reading more from this talented author in the future!

PS- The audio version of this book is incredible and only enhances Irish Winter's work. Troy Duran is new to me as a narrator, but this will certainly not be the last I hear from him. I loved his versatility and he kept me thoroughly entertained from start to finish.

This was my first in the series and I did enjoy it but wow! Troy Duran, what a voice! I was voluntarily provided this free review copy audiobook by the author, narrator, or publisher.

Great Book and Must read!!

I enjoyed this book and can't wait to listen to more books from this series.

Yes! I really enjoyed the storyline. There was lots of action and suspense, drama and heartache. I like how the characters from previous books were integrated into this story. I think the reader would have a better experience if the books were read in order. That being said, I did not read the first 3 books before listening to this one and I still loved it and there was enough background given that I was not lost while listening the story. I will definitely be listening to the other books in this series.

What other book might you compare Harley to and why?

There isn't another book to compare with.

What does Troy Duran bring to the story that you wouldn’t experience if you just read the book?

This is the first book that I have listened to that Troy Duran has narrated. He was fantastic! So much so that I did search on Audible for other books narrated by him. He has a great tone and he does a great job in changing his voice for the different characters.

This book was given to me for free and I provided this unbiased and voluntary review.

**I received this audiobook for my honest review**

This was my first book by author Irish Winters and narration by Troy Duran.
As the parent of a child with special needs, I am highly attuned to the manner in which an author/narrator represent disabled individuals. At first, I thought, "Here we go again..." in regards to Raymond, but after getting to know his circumstances, albeit heartbreaking, I feel he was given the respect and dignity he deserved.
As for the story overall, the only thing I regret is not starting with book 1 in the series, which I quickly remedied and am now onto book 2.
Troy Duran, you are a keeper. You brought this story to life and even wrenched a tear or two from this stone-cold, well-protected heart. Well done.

Harley is my book boyfriend

Irish Winters did an outstanding job with this latest edition of the series. I highly recommend you read the books in order for maximum enjoyment.

Harley was instrumental in saving Kelsey in the first book of the series, Alex. A strong bond was formed between Kelsey and Harley. Harley fought addiction and PTSD and deserved a happily ever after of his own with a strong woman.

The narrator does a good job with reading the book and I will definitely collect the whole series on audio in addition to kindle version. Hint. Save money on audio version by buying the kindle book first. Wait about a week and price on audio book drops to $1.99