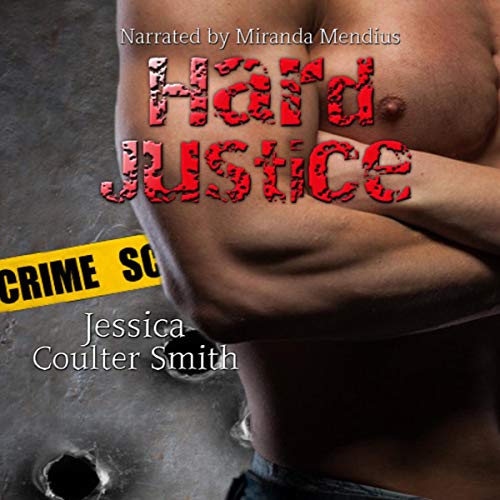 Dirty cop Travis Malloy has kept psychic Bliss Dougan under his thumb for a year. But as his jealousy rages out of control, she finally finds the break she’s been waiting for. Escaping into the night after an epic fight that’s left her scared and bruised, she does the only thing she can - she hides.

When the ghost of a recently deceased woman appears, imploring her for help, Bliss knows that Malloy’s dirty dealings are much worse than she’d feared, and she’ll stop at nothing to take him down.

Officer Justice Wild has always believed in the oath he took when he donned the badge, and he’s always been a sucker for a woman in need. Bliss tugs at his heart strings, even if he does think she’s completely crazy.

When her insane ramblings about ghosts and officer Malloy start making sense, he wonders if he’s lost his mind or if he’s ready to believe in the supernatural. Justice might have been prepared to do anything to put Malloy behind bars, but he hadn’t counted on falling for the sassy psychic who won’t leave his side.

What listeners say about Hard Justice

An enjoyable short story, good suspence, romantic tension and some ghostly clues to a crime.I received this book in exchange for my honest review.

A woman running from her dirty cop boyfriend never expected to find any justice. But she did in the delectable form of Officer Justice Wild. Now all Bliss needs is to put her ex Travis Malloy behind bars not just her assault but for Human Trafficking as well. But how can she convince Justice to listen when her evidence came from a ghost.. I thoroughly enjoyed listening to this short but sweet psychic romantic suspense. I received this Audiobook at my request and have voluntarily left this unbiased review.

"No one does anything for free anymore."

I'm obviously the wrong person to have read this short story, which is, essentially,a romance with a dash of soft porn plus a ghost, disguised as a police thriller. There is little character development what there is is cliched and mundane - admiring his hard muscles and flat abdomen, for example - and the soon-to-be-ex boyfriend seemed singularly unrealistic: abusive and domineering in their year long relationship, he and his partner had not bad sex for months before beating her up, and the abused heroine had just hung around waiting to be punished - yes, I know people can be victims and find moving on difficult, but where was that ghost when she needed her? No, not for me, though developed differently, this basic idea could have been made tense and exciting. However, as it is, the plot is bland, like the writing. Narration by Miranda Mendius was strong, with good enunciation and inflection, and each character was individually voiced, though a couple were rather uncomfortable listens. She greatly added to the texture of the story. I received a freely gifted complimentary copy of Hard Justice, at my request, from the rights holder via Audiobooks Unleashed. Thank you.

Great read and audiobook. Loved the characters and the story. Narrator did a fantastic job also.

This was an action packed short story. I really got invested quick with this one. It has the insta thing going on but I don't mind that so it was perfect for the story. I would have listened to more if there was. I really liked it. This is a new to me author and narrator. They both did a great job. I was given this free review copy audiobook at my request and have voluntarily left this review. AudiobookObsession AudiobooksUnleashed

This is a fast listen, perfect for when you're put running errands! Well written with lots of heat, plenty of action and adventure, and just a touch of the paranormal. The narrator did an excellent job on the different character voices. I know I'll be listening to this one again!

I am a huge fan and I love every story. Bliss is running from her horrible boyfriend. She communicates with a dead girls spirit leading her to find out what truly awful person her boyfriend is. Justice finds Bliss when he’s call to a building for the alarm being triggered. When he finds out her gift he thinks she’s nuts even when he’s attracted to her. They bring down the horrible ex and find happily ever after.

This is a great story. I loved the plot it was interesting and the paranormal element was an awesome touch. The narration was great and brought the story to life

This story could have been amazingly awesome if it had been more plotted out and in depth. The idea of the plot is amazing and I wanted so much from it. It was too rushed and too simplistic for how heavy the story was. It had so much potential.

Short story, but worth the listen

Justice and Bliss are a couple brought together through painful circumstances. Bliss has been in an abusive relationship with her boyfriend, Travis. He's also happens to be a dirty cop and Justice is on the force with him. After running away from Travis, Bliss hides herself in an abandon building when the cops are called. Justice shows up and decides to help and protect Bliss. The story keeps getting better and better. There's a dirty cop, ghosts, and a budding romance happening. Miranda's narration is beautifully done. Jessica wrote a compelling story that was brought to life thanks to Miranda. Human trafficking is awful. Thank you for bringing it to the forefront Ladies! Highly recommend this Audiobook!

Fast and action packed, this romantic suspense will keep you on your toes. Bliss is a psychic who after being beaten by her boyfriend, sees a ghost with important information. Seeking help, she is taken in by Justice WIld, an officer who has an unexplained draw to Bliss. But will he believe her when she tells him about the ghost? Will their attraction get in the way of the investigation? This is the perfect listen for my walk, and had me captivated. I love the psychic twist, the passionate build and the characters are just enjoyable. It's a great listen, narrated by Miranda Mendius, and just leaves you wanting more.

When Justice finds his warrior princess

Sweet novella of a psychic who’s abusive bf is non other than a cop...and a dirty one at that. Can she convince the officer who found her of this? Love the ending! I accepted a complimentary copy of this book in exchange for an honest review.

Romance with a twist

A predictable ending but with a unique spin to this enjoyable listen. The narrator is fantastic in voice changes, timing, and emotion.