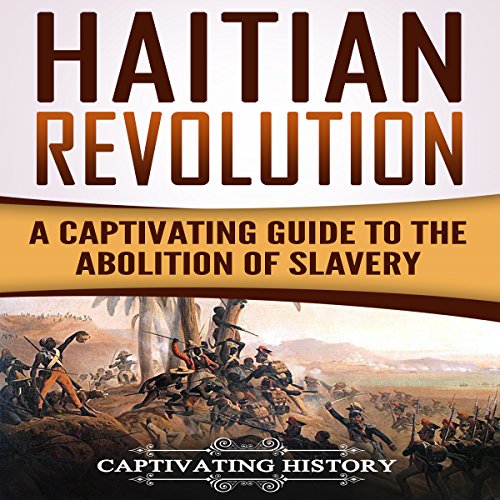 Haitian Revolution: A Captivating Guide to the Abolition of Slavery

Haitian Revolution: A Captivating Guide to the Abolition of Slavery

Explore How the Slaves Freed Themselves in the Haitian Revolution

The Haitian Revolution was a slave rebellion that began in 1791 in the French colony of Saint-Domingue, now known as Haiti. On this small island, the tyrants were the slave owners, people who not only denied their slaves freedom, but felt justified in killing them.

The Haitian Revolution began to change the way slaves were viewed all over the world. Although it took nearly another 100 years to eradicate slavery in the west, the parallels between what the Americans and French had done to the slaves was impossible to ignore. The Haitian Revolution was the first and only time that a slave rebellion resulted in a new state.

Some of the topics covered in this audiobook include:

Listen to this audiobook now to learn more about the Haitian Revolution.

Extraordinary story-telling of Haitian Revolution. Perfect for those of us who want to learn more about the Haitian revolution. Very good book. Recommended for all the history lovers.

Excellent book. The topic was concise and well-presented by the author. The history has been presented very well.

I enjoyed the book. would have enjoyed it more if was for the narrator clearing his throat and yawning.

his is a vital resource for academics studying the Haitian Revolution or anyone interested in learning more about this fascinating period of history.

If one must read one book on Haiti Revolution’s history and how its current socioeconomic condition has become the way it is, I would recommend this.

What a scary place. The information about Haiti's history high lights what a poor job the press, and our government, does in keeping us in the know.

Good overall history of Haiti helping to explain how Haiti evolved into what it is today and what may be required for growth.

Excellent review of the incredible political history and consequences of Haitian politics. No wonder the situation in Haiti is so bad in clouding the natural disasters.

This book is a complete information package about the Haitian Revolution. It is something new to me as i never heard it before. Thanks author!

This book contains lots of fascinating tidbits about the history of Haiti which many people have probably never heard before (did you know the US once feared invasion by Haiti?). It gives a very complete and fairly balanced view of the good, bad, and ugly of Haiti's history in the first half of the book then gives a lot of political background towards the second half.

This book needs revision for writing style, and more history. I was excited to listen to this book, but my zeal failed to the ignited.

For such a short book you’d think at least ONE PERSON would have listened to this before publishing?! The narrator cleared his throat, repeated himself and YAWNED MID SENTENCE lmfao

And the first half of the book my eyes glazed over because every other word was “slaves”. Then it was “former slaves”. Don’t deny people their humanity by never calling them people. I’m not sure why all I see are soaring reviews of this book but I guess you get what you pay for with this ¯\_(ツ)_/¯

This was a great book! It helped me understand the importance of Haiti prior to gaining independence from France and why the country is in its state today. The story is heartbreaking but also empowering and reading it will make you want to know more about Haiti and what can be done to help its citizens.

This book was a true pleasure to listen to. This author is the kind of historian who deserves to be teaching high school students (I mean this as a compliment) because while makes sure to include all relevant details about the Haitian revolution, he makes this book read like a fascinating story. This is a wonderful and well developed book, suitable for both laymen and scholars.

There was no editing of this reading. So it was super distracting. The narrator would cough every 30 min or so. He would yawn. Mess up saying words and go back and repeat them.
—it was strange and distracting.
He wasn’t the most interesting of speaker / narrator in general but the story should be interesting enough to keep you into it. But it was tough to follow. And as soon as you would get back into the book .. then he would cough or yawn again, and I was out of the book again

Excellent, Engaging Story That Needs To Be Heard

The story of the successful slave rebellion. This work is very engaging, and the subject is rarely studied by today's students. I have recommended this book to many people, it is really great.

Another point of view

Good book, allot of detail which I might have missed from reading other books of this nature. The book seemed a little bias towards the planter class in my opinion. I got the feeling that the Insurgents or slaves that revolted where more interested in seeking revenge than their freedom. Yet it was a pretty accurate description on how things might have been back then in Haiti.

A great book that gives you a good background on the true history of Haiti. Helps you see things from the French and Haitian, black and white perspective.

This book definitely deserves the prestigious prize it won. It masterfully blends detailed research with a superb writing style that made it a pleasure to read. I would recommend it both to someone who wanted to learn about the Haitian Revolution for the first time and to experts who wanted to compare different historiographer interpretations.

A thoughtful, easily understand overview of the Haitian revolution and concurrent social and economic changes. Highly recommended for anyone interested in an introduction to this neglected and oft overlooked event in democratic, republican, and anti-colonial history.