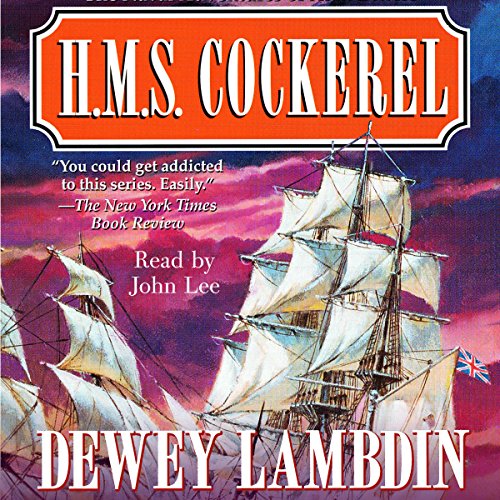 A farmer, a bloody farmer! Knee-deep in dung and fathoms from the nearest port, Alan Lewrie, swashbuckling naval warrior turned family man, longs for battle. And when it comes, a battle royal it is! Called to the H.M.S. Cockerel, a sleek frigate captained by a malaria-stricken tyrant, First Officer Lewrie soon vaults to command, taking Cockerel from the lush pleasures of the Kingdom of Naples to a smoking cauldron called Toulon. There, an outnumbered coalition of former enemies is being drawn into a terrible land-sea battle against the revolutionary French, in a siege of blood and terror that will send shock waves around the world.

He's fought and loved on land and bounding sea from America to the East Indies. Alan Lewrie is the unforgettable hero-rogue of the age of wooden-walled, spray-lashed fighting ships.

"Great fun...Lambdin continues to plunk Alan Lewrie down in the midst of interesting times with humor and plenty of authentic detail." (

What listeners say about H.M.S. Cockerel

I appreciate that sex isn’t overly present because the story and the presentation are terrific and the sex is an unnecessary distraction.

Would you listen to H.M.S. Cockerel again? Why?

Descriptions of the old sailing days.

Taking of the French ship.

Move over, Master and Commander.

What made the experience of listening to H.M.S. Cockerel the most enjoyable?

The narrator's ability to present so many different characters.

What was one of the most memorable moments of H.M.S. Cockerel?

The escape sequence from Toulon aboard the Radical and the successful engagement with two French corvettes.

Each of Dewey Lambdin's Alan Lewrie novels is a joy to read, and H.M.S. Cockerel is especially intriguing with the inclusion of Horatio Nelson and Lady Emma Hamilton. His command of 19th century English, naval terminology, geography and history are impressive. The Lewrie series is truly a gift to those who enjoy naval fiction, especially when the hero is such a "ram cat"!

John Lee's performance as narrator was again outstanding! His amazing ability to develop distinct voices for each of the characters made this Lewrie adventures come to life. Lee is an artist of the first order!

A few chaptets with the dialogue with the French characters tedious to listen to. Not enough to fast forward but made listening difficult.

Great series! I have read all the books. Now it fun to listen to them while working.

wonderful adventure. very explicit battle scenes. luckily i was alone as my eyes got moist during the reflection of the main battle.

Which character – as performed by John Lee – was your favorite?

Who was the most memorable character of H.M.S. Cockerel and why?

Phoebe by far. Hope to hear more from her

A lot of French language. I don't speak french. Lost a fair amount in translation

Napoleonic Era naval fiction in the best tradition of the genre. Enjoying my second listen to the series as much as the first.