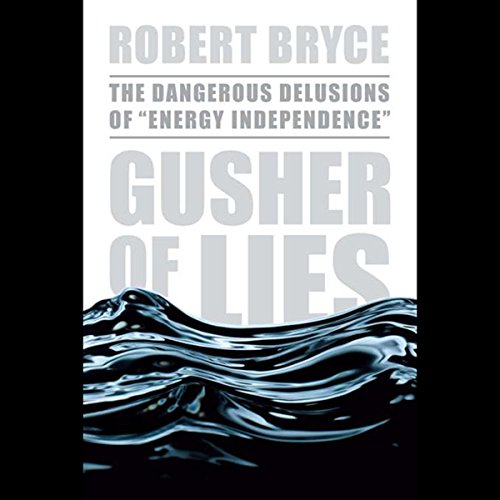 A surprising, irreverent, and scrupulously reported deconstruction of today's fashions in energy policy. Everybody is talking about "energy independence". But is it really achievable? Is it actually even desirable? In this controversial, meticulously researched book, Robert Bryce exposes the false promises behind the rhetoric while blasting nearly everybody - Republicans, Democrats, environmentalists, and war-mongering neoconservatives - for misleading voters about our energy needs.

Gusher of Lies explains why the idea of energy independence appeals to voters while also showing that renewable sources like wind and solar cannot meet America's growing energy demand. Along the way, Bryce eviscerates the ethanol scam. Whether the issue is cost, water consumption, or food prices, corn ethanol is one of the longest-running robberies ever perpetrated on American taxpayers. Consumers concerned about peak oil and the future of global energy supplies need to understand that energy security depends on embracing free markets and the realities of interdependence. Gusher of Lies is illuminating and vital.

"It’s exhortative instead of purely informative. It hammers apart the idea that we really want to be independent of oil. Energy interdependence should be the actual goal for our energy system." (Politico)

Thesis is okay - point of view too narrow

What would have made Gusher of Lies better?

Come at it from a more centered position

I didn't quite get all the way to the end

It was quite competent - the tone brought out the author's obvious bias.

It presents the problem well enough. But instead of saying that any one form of energy could be a PART of a solution, he dismisses each as incapable of replacing oil on it's own (and truthfully tells why I might add).

Oil is a world-wide commodity and it's price is based on that demand. It will never be completely replaced, but oil should be looked at as "too precious to waste". It is hard to see it's use in plastics being replaced. That's about 40% of it's present use. And replacing plastic as a packager? Very unlikely. It makes our food and drugs safe, etc. No one form of energy, green or otherwise, will completely ameliorate oil's use, but combinations of many of them can be used to replace it for our transportation, heating & electrical power generation requirements.

A much better listen is Daniel Yergen's The Quest. It identifies many of the issues brought out is this book, but in a much more even-handed, historical and logical manner.