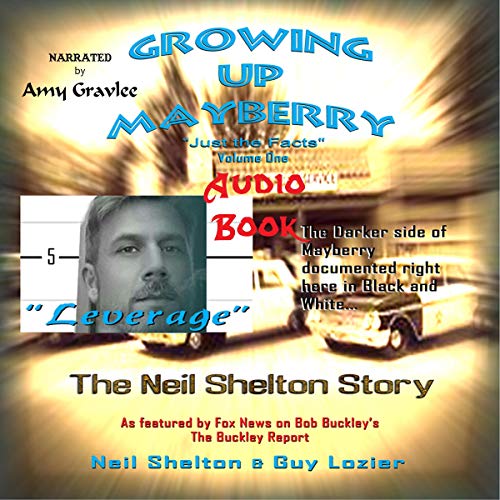 Growing Up Mayberry: Just The Facts

There's blood on the streets of Mayberry....

Growing Up Mayberry: Just The Facts gives a glimpse into the other side of America’s Hometown of Mount Airy (also known as Mayberry), North Carolina that most never experience nor could imagine experiencing.

The Andy Griffith Show represented everything that was right with America...always teaching a lesson with each and every episode. Justice, honesty, kindness and doing what is right were the driving factors to create the said utopia of Mayberry.

The Andy Griffith Show filmed its last episode in 1968 and has never been off the air since its first episode.

This true-life story picks up in 1970 and takes you along the journey of William Neil Shelton, a former life-long resident of Mount Airy, North Carolina aka Mayberry.

With this story you can trace the moral decline of America which put us as a country where we are today.

The rise of corruption, false allegations, cruelty and total disregard to human life and rights is the other side of the Mayberry you will see.

This unbelievable but documented and vetted story is told mainly by the very paperwork that was used to destroy William Neil Shelton. All the names are true and the documents have not been tampered with so the paperwork tells the bulk of the story.

Volume 1 Leverage, will take you through the first part of William Neil Shelton’s story. The Embezzlement and illegal actions of the Mount Airy Police Department, District Attorney, Surrey Bank and Trust, to name a few, and stops just short of any divorce issues.

Volume 2 Annihilation is coming soon. This is another mind-bending Journey in itself.

What listeners say about Growing Up Mayberry: Just The Facts

Growing Up Mayberry: Just The Facts Leverage, Volume One By: Guy Lozier, Neil Shelton This was deceptive. As it is advertised, the listener thinks they are learning about Mayberry. In all reality it is one mans journal of a grudge. I'm sorry for the man's misfortune, but as a true crime buff; this just didn't cut it for me! The narration was OK. Amy Gravlee seemd to be reading a bunch of incident reports that were dry as dust. I was given this free review copy audiobook at my request and have voluntarily left this review.