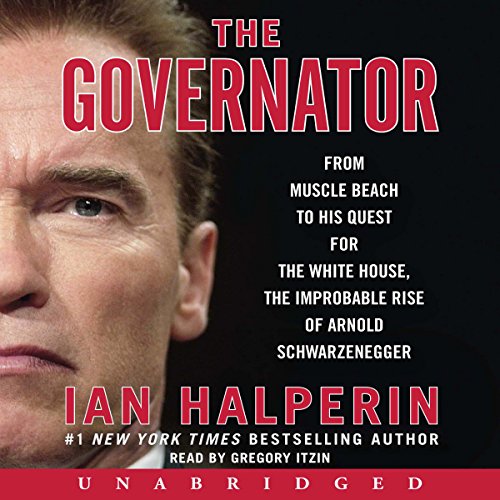 By: Ian Halperin
Narrated by: Greg Itzin
Try for £0.00

Who is the real Arnold Schwarzenegger?

From his childhood in Austria to his rise as a star of American conservative politics, the story of Arnold Schwarzenegger's life reads like the script of a Hollywood B-movie penned by Horatio Alger. In this exclusive peek behind the curtain, award-winning scoop hunter Ian Halperin wades through the myths and rumors to discover the real Arnold behind the icon, a man defined by unbridled ambition and an unending quest for power.

Based on extensive research, undercover forays, and candid interviews with many of the Terminator's close friends and peers, Halperin brings the myth to life with:

And finally, Halperin uncovers the never-before-told details of an incredible and audacious plan for Schwarzenegger to attempt to rewrite the Constitution and run for president of the United States.

What listeners say about Governator

Would you listen to Governator again? Why?

Great listen, covering many aspects of Arnold life not covered by his autobiography.

Enjoyable - I found his imitation of Arnold voice a little laughable, and sometimes the way he said something Arnold did - took away from the seriousness or true message of what Arnold was saying. E.g. when Arnold starts talking about first lifting weights - that moment was his "struck by lightning" moment, the liight that would drive him even until today. If u listen to Itzin, it sort of makes a mockery of this serious point. That wouldn't be a problem, but people who would want to understand and what motivates need to understand that we all get these moments, and if we press on it with inspirations even when hard, we can achieve much as Arnold did.

Great surprise on many aspects of the book, since Arnold did not cover in his autobiography.

The most important thing I learnt was to read "Wendy Leigh" Arnold Schwarzenegger biography. After completing this, I read that (available on Amazon Kindle - cheap), that book turned out to be the best bio ever.

If you’re looking for tabloid garbage narrated in the voice of an infantile bully , this is your book. Otherwise, skip it. It only exists to demean Arnold Schwarzenegger.

I really enjoyed this book. It seemed like a fair account. Even though there is quite a bit of negative controversy throughout Mr Schwarzeneggars life there is still a place for great admiration. He truly understands the secrets of success which he has applied throughout his whole life.

A fairly balanced take on Schwarzenegger, from his childhood, bodybuilding days, to Hollywood and the Governor's mansion. Doesn't shy away from the controversies while at the same time is a bit sensationalist at times though that is probably warranted given the subject. The author's inherent fondness for his subject shines through.

Good information and well-referenced. My biggest problem is that the author sometimes tries to pass speculation as truth and offers his personal, Canadian, socialist opinions to judge Arnold's political policies as tries to pass them off as main-stream American.

could not get into the story due to the narrator

What disappointed you about Governator?

not as strong american accent in the narrator

What character would you cut from Governator?