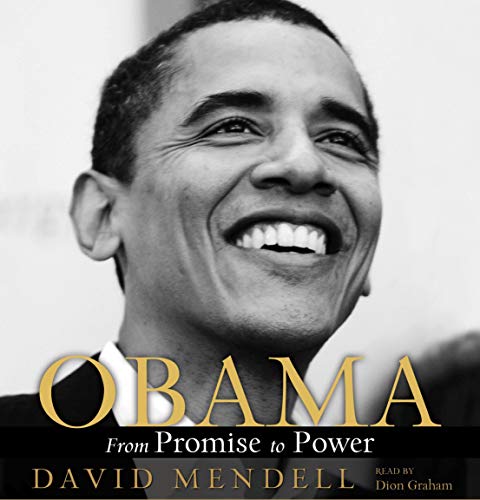 By: David Mendell
Narrated by: Dion Graham
Try for £0.00

Here is the biography of America's hottest political superstar, Barack Obama, from a journalist who has been covering Obama's career since his successful run for the US Senate.

Barack Obama's meteoric rise is the stuff of legend. Since his headline-grabbing speech at the Democratic National Convention in 2004, Obama has come to represent the promise of unity among groups of all types: blacks and whites; Democrats, Republicans, and moderates; the upper, middle, and lower classes. In this groundbreaking biography, veteran journalist and Obama chronicler David Mendell gives an in-depth, comprehensive portrait of a man whose name has become a catchphrase for hope in a politically jaded society desperate for a new star.

Mendell has covered Obama since the beginning of his Senate campaign and, as a result, enjoys far-reaching access to the new senator. His research includes exclusive interviews with Obama's closest aides, mentors, political adversaries, and family. Mendell reveals the surprising, cutthroat campaign tactics sanctioned by Obama - who has steeped his image and reputation in the ideals of clean politics and good government - which enabled him to win his Senate seat by employing some of the most ruthless operatives in the business.

Eye-opening, well-researched, and compulsively listenable, Obama: From Promise to Power is a necessary look at the evolution of a politician from public servant to candidate-savior.

What listeners say about Obama

This book explains who Obama is, warts and all.

This is an excellent book greatly enhanced by Dion Graham's narration. I've enjoyed both of Obama's own books but find that I frequently return to David Mendel's 'From Promise to Power' This book fleshes out his background and character whilst giving us glimpses into his family life. Anyone interested in Barack Obama's rise to power will thoroughly enjoy this journalists unbiased view. My hope is that the he is at present writing a sequel taking us up to the Presidency. Hopefully it will be made available for audible listeners with the same narrator and I will be the first to purchase it.

I went through a bit of an Obama-fest with Audible, listening to Dreams from My Father, The Audacity of Hope, and then this book. If you are looking for a book to read on the President I would strongly recommend reading his first book, Dreams from My Father (written in 1994) before this one. This book, Obama (unabridged), spends the first chapters basically reiterating 'Dreams'--and it is much better to listen to Obama reading his book himself rather than this paraphrase job. The great advantage to this book, Obama (unabridged), is that it covers what 'Dreams' and 'Audacity' do not, namely an in-depth coverage of his 2004 Senate race and then his superstar Africa trip 2 years later; the author spends 2+ hours of this audio book recounting Obamas trip. It is both a meditation on Obama's rise to celebrity status and one journalist's own experiences as a news professional 'on the stump'. Both elements are interesting, though the authors tendency to 'put himself in' is at times distracting. That said, this is a great snapshot insight into life of a campaigning politician, and it does discuss how Obama's usually unflappable persona got frayed at times through his meteoric rise to prominence. Worth a listen if you want more of the 'back story' to how Obama got to the White House.

More an ego boost for the author

I found the book very critical about Barack Obama, but more critical of 'irritating' traits the author found in Obama in their encounters than saying anything meaning of his character. Not a book I would recommend to someone that is a fan or interested in Barack Obama. Although I am not familiar with this author, I find him to be using his interviews with Barack Obama to make a name for himself with this book. Sadly disappointing.

I've thoroughly enjoyed this audiobook.
It allows us to understand the man, but also part of the electoral process.
Thanks for a great listen.