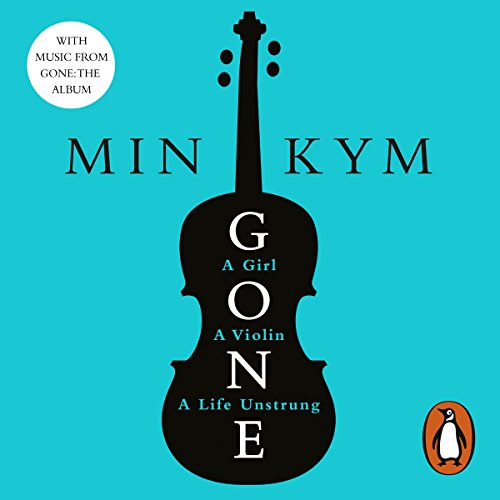 At seven years old, Min Kym was a prodigy, the youngest ever pupil at the Purcell School of Music. At 11 she won her first international prize. She worked with many violins, waiting for the day she would play 'the one'. At 21 she found it: a rare 1696 Stradivarius, perfectly suited to her build and temperament. Her career soared. She recorded the Brahms concerto, and a world tour was planned.

Then, in a train station café, her violin was stolen. In an instant her world collapsed. She descended into a terrifying limbo land, unable to play another note.

This is Min's extraordinary story - of a young woman staring into the void, wondering who she was, who she had been. It is a story of isolation and dependence, of love, loss and betrayal, and of the intense, almost human bond that a musician has with their instrument. Above all it's a story of hope through a journey back to music.

Includes music from Gone: The Album.

Gone: The Album has been released on Warner Classics and is available for streaming and download and as a physical CD.

What listeners say about Gone

This is a wasted opportunity. Potentially fascinating, it wanes superficial about education and about music. And the writer can't communicate the inside of being a musician for toffee.
The reader has an affected accent and a chummy manner that does not suit the subject. She has not learnt to pronounce any of the foreign names, which means that every sentence jars as she tears apart the makers of violins, great pianists and the central repertory.
What happened to educated editors? Knowledgeable producers? Gone.

The Korean violinist Min Kym was a child prodigy. At seven years old she was the youngest entrant ever to the Purcell School of Music and she moved from Korea with her mother (her father was largely away on business) and sister to London. By her early teens she was a world renowned violinist playing all over the world and from her prize money and fees she was able to buy a £250,000 1696 Stradivarius. This precious instrument was totally welded and wedded to every pore, sinew and fibre of Min's being and for ten years her reputation as a violinist - and the value of the instrument - soared.

Not surprisingly Min's emotional development was damaged by her prodigy childhood. There was tremendous conflict between the Western life she was living and the restricted Korean home life bound by traditional bonds of absolute obedience. The tutors on whom she depended became over-bearing; relationships with controlling young men foundered. It was as one relationship disintegrated that Min's Stradivarius was stolen by professional thieves at Euston Station and she sank into years of grief, unable to play or function. The essential part of her very being had gone.

Three years later the Stradivarius was recovered, but Min suffered fresh agony when she couldn't afford to buy it back and she has to live with knowing that it is in a vault, imprisoned and silent, preserved somewhere as an investment. These years of breakdown gave Min time to gauge the loss not just of her violin, but of her childhood, her sense of nationality; her very identity, all of which had been the other side of being an adored child prodigy.

Having unravelled 'unstrung' for so long, Min is now playing again with another Amati violin, but the loss of the Stradivarius continues to scar her soul. It's a unique memoir told with clear insight. There's no hysterics or harsh judgements, just the facts and the analysis of consequences of the theft. The gentle narration by Rebecca Yeo complements the spirit of the whole beautifully.

Beautiful but sad story about this young woman. Two people, in particular, are responsible for causing her so much ongoing pain and should be ashamed. Regardless of the ending of the book I hope she is one day able to buy back her violin, cruelly snatched from her, twice, the first time by thieves and the second by wolves.