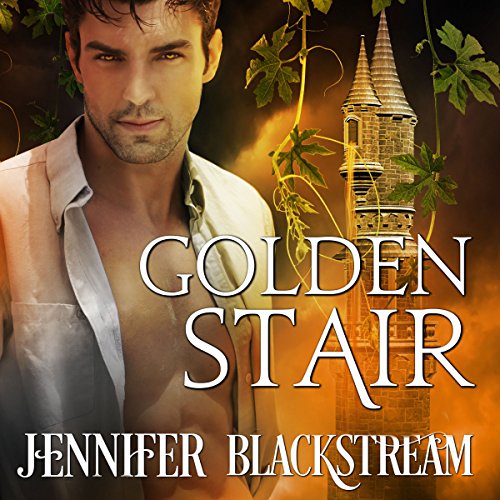 By: Jennifer Blackstream
Narrated by: Matt Addis
Try for £0.00

Adonis is a demon prince determined to bury his desire for love in the pleasures of the flesh. Bound by a vow to maintain his physical form, Adonis requires a great deal of energy just to live, energy he can only absorb through the carnal arts...more energy than any one woman could ever provide. Adonis knows he could never offer a woman the fidelity she would deserve as his wife, and so carries on with his wild ways, his cryptic smile hidden behind a puff of smoke. No woman can reach beyond the heat of his embrace to touch his heart. Not even the golden-haired maid whose lonely eyes keep wooing him back to her side.

Ivy has lived in a tower, locked away from the rest of the world, for her entire life. Her mother, a witch who leads the resistance against the bloodthirsty kings of the five kingdoms, is her only company. Ivy knows that her battle-weary mother relies on the golden power flowing through her veins for the energy to continue the good fight, but she can't completely smother the selfish yearning to see the world beyond the safety of their hidden valley...especially when her wildest fantasy almost literally falls into her lap. Despite their best intentions, they're drawn together like phoenixes to flame - and if they're not careful, they'll both burn.

Long golden hair. A tower with no stairs. A witch with serious possession issues. Debilitating blindness. None of these are enough to keep a demon from climbing...the Golden Stair.

What listeners say about Golden Stair

Another Addictive Romance in this Magical Series.

I am a fan of Ms Blackstream's writing style; I love the way she mixes well known (and beloved) fairytales and gives them a new perspective in this series.

I downloaded the narration of this book too. Once again, Matt Addis' performance was amazing. The pace of reading transported me to the scenes and his tonal characters' variations brought them to life. He is a talented voice actor and I would happily buy books narrated by him in the future.

I love our romantic couple; Ivy is kind, loving, loyal and has oodles of gumption. I already had a soft spot for Adonis as he appears in the previous Blood Prince books too but I enjoyed getting to know him more intimately in this novel.

I love the prologues and epilogues that Ms Blackstream gives us in these books that progresses the background story of Eurydice's quest within The World Tree and I can't wait to read the next story.

Matt Addis did a wonderful job, as always. His inflections, pronunciations, and voices make listening to the books he performs a pure pleasure. He makes me laugh at scenes I only smile at while reading the Kindle version.

Warning: Kindle and Audible versions Do Not Match Up perfectly. Some chapters either have 'extra' information, or are rearranged slightly - if not both.

Matt Addis's narrative of Jennifer Blackstream's take on Rupunzel was a pleasure to listen to. I enjoyed every minute.

If you could sum up Golden Stair in three words, what would they be?

What was one of the most memorable moments of Golden Stair?

When Ivy finally broke free from the monster she called mother to free the one she loves.

His attention to giving each character their own emotions and voices while keeping the descriptions neutral.

Several sections are notably moving to me. Revealing them would make enjoying the story difficult.

I love the funny and fun loving demon. The characters, as always, are written in a way that allows listeners to feel their emotions and pulls you into their world. Having read the book before listening to the audiobook, I find the story is fresh and enjoyable again and again in any form.

Jennifer Blackstream does it again! Adonis is my kindred spirit and Ivy is the purest heart. This book is packed with life, love, action, and of course all manner of creatures and magic. if only I had my own demon to love!