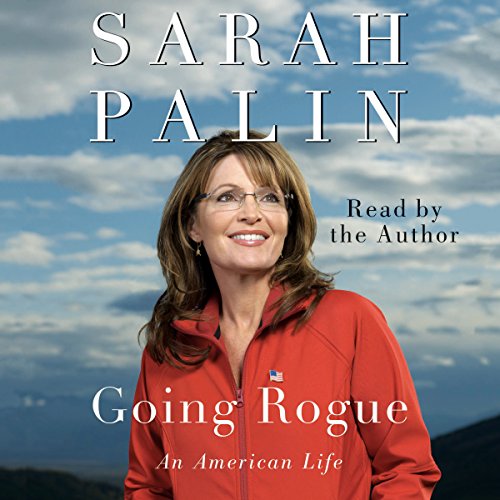 One year ago, Sarah Palin burst onto the national political stage like a comet. Yet even now, few Americans know who this remarkable woman really is.

As chief executive of America's largest state, Sarah Palin had built a record as a reformer who pushed through changes other politicians only talked about: energy independence, ethics reform, and the biggest private-sector energy infrastructure project in U.S. history. While revitalizing public school funding and ensuring the state met its responsibilities to seniors and Alaska Native populations, Palin also brought Big Oil to heel.

She was a Main Street American woman: a working mom, wife of a blue-collar union man, and the mother of five children. But as the presidential campaign unfolded, Palin became a lightning rod for both praise and criticism. And few knew the real Sarah Palin.

In this eagerly anticipated memoir, Palin paints an intimate portrait of growing up in the wilds of Alaska; meeting her lifelong love; her decision to enter politics; the importance of faith and family; and the unique joys and trials of life as a high-profile working mother. She also opens up for the first time about the 2008 presidential race, providing a rare, mom's-eye view of high-stakes national politics - from patriots dedicated to "Country First" to slick politicos bent on winning at any cost.

Going Rogue traces one ordinary citizen's extraordinary journey, and imparts Palin's vision of a way forward for America and her unfailing hope in the greatest nation on earth.

What listeners say about Going Rogue

Not sure if I admire Sarah Palin or think she was misguided. She has been fiercely loyal to John McCain in this which I like and seems to have taken everything in her stride. In another time her ticket may have come in. I like that she read it herself so there can be no mis quotes. I don't agree with all of her politics and the book is more of an overview with reasons why things were done the way they were but I do believe that morally she is a good person and that comes across in the book.

Abridged version jumped around too much. Was very difficult to follow in places. Enjoyed hearing Sarah read her book. Just wish it had been unabridged version.

I loved listening to Sarah Palin talk about life in Alaska, but when she started getting into the political heart of it, I lost interest and haven't finished it.

I really and truly enjoyed S. Palin's book. I felt that she was down to earth, honest and refreshingly realistic in her account and own words. You will truly see her heart in this book. I would recommend that you listen to the book.

Going Rogue lacked the essential element that I look for in a good biography, critical self examination. Throughout, Sarah explores the actions of others, identifies mistakes and wrongdoings, and assigns lots motivation(s)to others, all the while explaining that her actions are always motivated by principle and god. In regards to the 2008 presidential campaign the book is nothing short of one long "whine" regarding how unfairly she was treated and how inept McCain staffers were in their management of the campaign and Sarah's role. There is not one ill word of Mr. McCain, as if McCain had nothing to do with limiting her role, I felt left to wonder if it had even occured to Sarah that she was not Mr. McCain's first choice (maybe Lieberman or Ridge?). Was Sarah Palin choosen for the vice presidential running mate as concession to the Christian right of the GOP, a choice made to garner right wing money and votes? We don't know, like the rest of the book Sarah doesn't explore anything with a critical eye. Of her political career Sarah says she was not driven by ambition, nor by any particular goal, like power, wealth, or fame. Sarah tells us she was driven by purpose (as in the purpose driven life?). If the book reveals anything at all about the real Sarah Palin it's about her religious beliefs, which I found chilling and disturbed. Throughout the book, Sarah tells us she always prayed on decisions large and small and then waited for god to give her "signs". I've seen the video of hands being laid on Sarah in her Church while prayers were said for her political success, I would have liked to have read about this in her book. I am unsure of Sarah's exact belief's regarding the role of religion in politics, having to speculate is disturbing. I can't recommend this book.

I was hoping for some juicy and interesting Behind the Scenes, instead I got a laundry list of new folky words to look up in the dictionary. Sadly, a really boring read...

This narration is excellent. After this abridged version, you may want the full text.

Unfortunately, most of the anonymous "helpful" or "not helpful" clicks are obviously from folks who haven't read or listened to this book. This is reflected in the 4.5 star rankings and thoughtful reviews, compared to the lopsided "was this helpful" number. Why do you think "these" people want to shut Sarah down? GO ROGUE, and see !!

Worth a credit and a listen? You Betcha!

I knew it was unlikely that I would agree with her politics, and was prepared for a painful listen. I was surprised.

An easy, favorite target of the media, Ms. Palin made a good case about the lack of balanced and responsible journalism in this country, then she turned around and pointed the finger flatly and squarely on "liberal media". The outrageous partisan mudslinging in Washington is bad for America and both sides are guilty. I was disappointed by her lack of graciousness here, which seemed out of place in an otherwise pretty upbeat narrative.

Any thinking person following the elections would have questioned at one point or another the fairness of the media's portrayal of Ms. Palin. I was interested in hearing her side of the story and thought she did a decent job explaining herself, balancing embarrassment, outrage, indignance, and yes, even a little humility. Policy-lite, but personally rich, it was a coming of age story. I found her sincere and real and it was enjoyable to follow along with her adventures in the world of national party and election politics.

Getting a sense of her background, it seems that she was guilty mainly of trying to bring national politics back to her kitchen table, a context that many can relate to, and made me wonder why more people didn't respond to her - isn't that the same "folksy" schtick that got George W the biggest bully pulpit on earth? While Washington could certainly use more common sense, it is also irresponsible when politicians oversimplify the issues and speak down to Americans - comparing the complexities of a national budget to a household budget, for example. So, Sarah, while I'm relieved you're not second in line to the Oval Office, I enjoyed getting to know you and thought your memoir was "Positively Palin" and well worth the listen!

Very educational on the behind the scenes in a political campaign, both on the state and federal level. Also the sometimes unfounded trust that candidates put in their managers and the tolls, both professional and personall, the races take on everyone involved.

Would you consider the audio edition of Going Rogue to be better than the print version?

It is always better when the author reads so I would have to says yes to this.

What was one of the most memorable moments of Going Rogue?

There were moments when Sarah wanted to be herself or respond to attacks and the higher-ups in the McCain campaign were telling her "No." So sad, I think he would have had a much better shot at the white house if they had let her

Have you listened to any of Sarah Palin’s other performances before? How does this one compare?

It is always better when the author reads. if you are an author please keep this in mind.

Would you consider the audio edition of Going Rogue to be better than the print version?

Not better but equally as good.

Have you listened to any of Sarah Palin’s other performances before? How does this one compare?

I have tried to listen to every speach she has made. And I am looking forward to many this fall.

This book makes patriots of all it's readers (listeners).