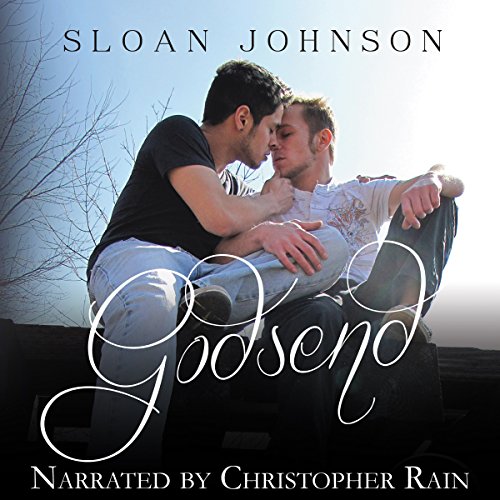 By: Sloan Johnson
Narrated by: Christopher Rain
Try for £0.00

You can't choose who you fall in love with. Despite assuming from a young age that he was gay, Scott Murphy couldn't imagine life without Shelly. He threw away the label he'd stuck on his sexuality and had 11 amazing years with her, but now, he feels even more lost trying to figure out how to move on after Shelly's death. After nearly a year of watching Scott fade away, Shelly's father forces him to start living again.

As much as Chris loathes the idea of attending a bereavement group week after week, it's one of the only places he can go in this town, other than the bar, to not feel so alone. When there's nothing to distract him or dull his senses, he spends too much time obsessing over how he should have been able to help his sister. When Scott shows up at his group session, Chris decides that maybe some good can come out of his sister's death.

There's no denying that Chris is the first man to catch Scott's attention in a long time, but how can he move on when just thinking of Shelly sends him to his dark place?

The road to recovery won't be an easy one, but Chris is determined to help Scott see that life is still worth living. But before Scott can allow himself to admit what he feels for Chris, he knows he has to reveal the full truth about Shelly's death.

What listeners say about Godsend

The performance from the narrator is also very important for me. I can't listen to a lot, because my English as a non-native-speaker isn't so perfect to follow a whole story over hours, when the narrator speaks too fast or too sloppy. Normally I have to SEE the person, who is talking to me in English. Christopher Rain is one of the 8 narrators (so far), I can listen without break and have no problems to follow. I'm just not yet finish with the book, just over the half, but I listen enough to give a review.

I absolutely love this book and have read it 3 times, so the story rating was always going to be 5 stars.

The narration by Christopher Rain is sombre and in keeping with the bulk of the book. However, there are some moments of light relief in the story and I didn't feel that his voice lifted to reflect these.

Don't buy this book, I'm sorry I did

Why in the hell would you start a book with a suicide?

Why does the narrator mispronounce the simplest words?


Has Godsend turned you off from other books in this genre?

Would you be willing to try another one of Christopher Rain’s performances?

Whatever you do, don't start a flipping love story with a flipping suicide!!

I have given four stars for story, though I really can't be sure what it is worth. It's hard to judge a book when the narration is poor. In this case, almost the whole book is read in a croaky monotone. That seemed apt in the beginning when the main character was deeply depressed. But then completely at odds with the words being read later on. It is also pitched so low, apparently at the very bottom of the narrator's register, that there is even less scope for expression of voice. There is no apparent attempt to differentiate between the voices/accent of the two main characters - which makes it very confusing when they are the only two participants in much of the dialogue. The other characters, especially the few female characters, are given ludicrous voice/accent characteristics, that are so laughable that it is really distracting and removes any sense of realism in their characterisations.

I enjoyed the narration of this story. There were distinct voices for the characters so I didn’t get the MCs confused. The story however was a bit tedious at times. I think a lot of it could have been omitted. Overall I was okay with it but I won’t be listening to it again.

What a great listen. I enjoyed this storyline it was sad and emotional but the characters are interesting and lovable. Chris and Scott have long road to travel and in the end they find happiness together. Great storyline. The narration was great.

it was heartbreaking but beautiful. I loved every minute!And the narrator did a great job.

The most beautiful story

If you want a story full of feels, search no more. This is a love story that goes straight to the heart. Scott has been with his high school sweetheart Michelle through more than any young couple should. After Shelly passes from cancer Scott doesn't deal well with her death and his father in law keeps pushing him to go to a group meeting. He finally goes to one and meets Chris. They develop a friendship and soon their comfort for each other becomes more but it's not easy.
Chris has lost his sister. He deals with death all the time being a bereavement counselor but when it was his family it was different. He sees something in Scott and is attracted but soon finds out he lost his wife.
This story has so many twists and turns and just when you think the tears can stop... something else happens to evoke more emotions. I cried and cried sometimes happy tears but I will say the ending was so beautiful. I loved how not only is this story written in Scott and Chris's view... you also get Shelly as she watches over Scott. BEAUTIFUL.
So if you are looking for a story with lots of feels, emotional, angsty, a beautiful romance look no more! and have a box of tissue handy.

i enjoyed this one. not my favorite but not bad either. the narrator was interesting to listen to.. the story was very good. and overall it was good

Would you consider the audio edition of Godsend to be better than the print version?

I have not read the print version

While the narrator had a nice voice there were two things that kept me from enjoying it: his narration was stilted and did not flow consistently and I lost count of how many words he mispronounced. My favorite was saying "chassis" for "chaise".

The epilogue was particularly poignant.

Does anybody listen to the finished product before it is released? If so, they should have caught and edited the mispronunciations.

Godsend was a struggle for me. I persisted and listened to the end, however I very nearly gave up on quite a few occasions. It's not even that he is gay and married a woman, or that the woman knew and wanted to marry him also that was necessarily odd with this book. I just felt right from the first moments that the whole premise on which the book was based was unrealistic. It just never 'felt' right to me.

This feeling was backed up by several other events in the book. His running away when they went for coffee, I mean, how old is he? 11? The coincidence that Chris happened to be the one who almost ran into him causing his ankle to break. The nurses' assumptions, quite unprofessionally, that he was gay because it was a man he came to hospital with. Chris's relationship with his father...what was that all about? Chris is a 35 year old professional not a 15 year old school boy!

For me, the book was just full of flawed logic and unrealistic circumstances that must have prevented me from feeling empathy for the characters. Because, to be honest, I didn't feel empathy at all for Scott. I am one who is usually very able to empathize with characters, but I just never really cared. This MAY have been the result of what I thought was quite poor narration.

Christopher Rain's whinging voice almost drove me insane. His tendency to drop his tone at the end of sentences led to my feeling that the main characters were just wallowing, self piteous cretins! And the voice characterization of Chris's mother was unbelievably bad. It grated me to the point of my being unable to concentrate on what she was saying from my focus on how bad her voice was.

I am not usually one to write 'bad' reviews. I understand people respond differently to the same story and that many people enjoyed this novel. I, however, did not enjoy this completely humorless and morbid book and as such, I cannot recommend it.

I had never heard "thermos", "invalid", "chaise", and "plethora" pronounced the way that this narrator pronounced them, but he did a nice job, otherwise.