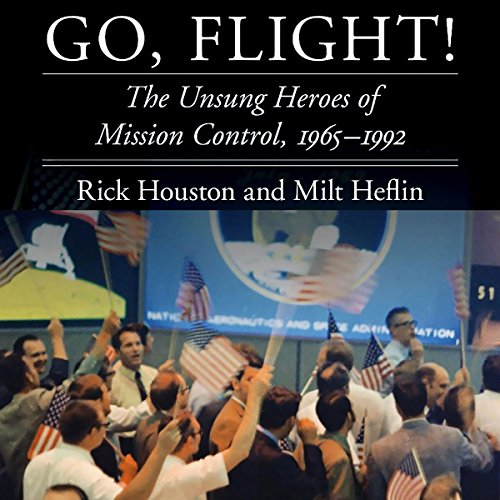 At first glance, it looks like just another auditorium in just another government building. But among the talented men (and later women) who worked in mission control, the room located on the third floor of Building 30—at what is now Johnson Space Center—would become known by many as "the Cathedral." These members of the space program were the brightest of their generations, making split-second decisions that determined the success or failure of a mission. The flight controllers, each supported by a staff of specialists, were the most visible part of the operation, running the missions, talking to the heavens, troubleshooting issues on board, and, ultimately, attempting to bring everyone safely back home.

None of NASA's storied accomplishments would have been possible without these people. Interviews with dozens of individuals who worked in the historic third-floor mission control room bring the compelling stories to life. Go, Flight! is a real-world reminder of where we have been and where we could go again given the right political and social climate.

The audiobook is published by University of Nebraska Press.

"A great read both for fans for spaceflight and for scholars interested in a social history of Mission Control." (Quest)

"I experienced almost every emotion possible while working in mission control. Authors Rick Houston and Milt Heflin have taken me right back into the heat of battle with their outstanding book." (Steve Bales, guidance officer during the Apollo 11 lunar descent)

What listeners say about Go, Flight!

In the trenches of the MOCR.

An excellent book about the important people in the trenches. Well worth your time. Read by an excellent narrator.

Good book, with some interesting insights

I've read many books on the manned space program, and this is one of them. Not the best, not bad either. Bringing the perspective of the grounds controllers helps fill in a much needed perspective. It makes the events of those days relatable from a perspective we might have more in common with.

The book does tend to wander a bit. It starts with a description of all the positions, possibly before you are ready to consume it all. On paper, you could quickly refer back to that section, but that doesn't work well in and audio book format. As the book moves to tell the story of all the missions, the transitions between mission phases, people's back story, and even different missions are abrupt at times.

That being said, I enjoyed it, and I learned a lot from it.

I thought this book told an engaging story about the under recognized heros of the space race.

A very insightful and informative book.

I have always felt a special connection to the flight control people in space travel. This book lays it all out and brings you inside the smokie rooms. Best of all, you get to know all the great people who made this incredible technical marvel a reality. This is a fine book and I enjoyed every second of it. Very technical, yet full of the human side. Simply a must read.

A Great Listen- A Great Story

This story covers a period of 27 years in the life of Mission Control. The astronauts are included in this story, but the stars are the mission controllers and a story that describes how a minimally trained group was able to ultimately handle every issue thrown at this group of folks and how the took the USA to the moon. The majority of the story covers the Apollo program, but learning about the people that worked there drew me in. Enjoyable and not overly technical.

This is a fine history about support personnel of the American space program. It is solid scholarship and a solid audiobook performance.

The triumphs and tragedies of the US space program was truly an amazing story. I enjoyed the story, without being overwhelmed with the technical jargon.

Good book - maybe too many names?