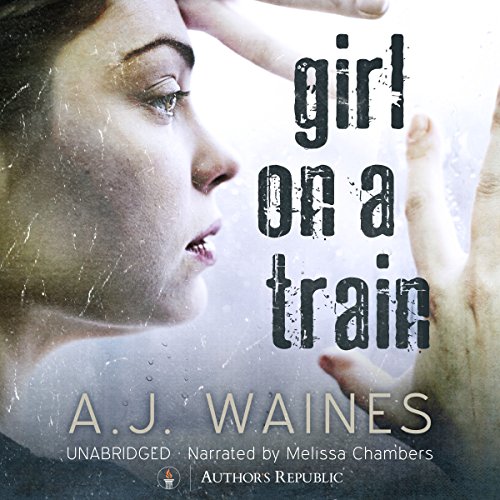 Girl on a Train

Headstrong journalist Anna Rothman knows what suicide looks like - her own husband killed himself five years ago. When Elly Swift, an agitated passenger beside her on a train, leaves a locket in Anna's bag before jumping onto the tracks, Anna starts asking questions. But everything points to suicide and the police close the case.

However, Anna believes that Elly's fears for Toby, her young nephew who was snatched from St. Stephen's church six months ago, fail to explain the true reason behind Elly's distress. Through a series of hidden messages Elly left behind, Anna embarks on a dangerous crusade to track down Toby and find Elly's killer.

But nothing is as it seems and Anna opens a can of worms that throws into question even her own husband's suicide - before the threads of the mystery converge in an astonishing conclusion.

What listeners say about Girl on a Train

This story is not believable and does not hold the attention of the listener.

What was most disappointing about A. J. Waines’s story?

Who might you have cast as narrator instead of Melissa Chambers?

I wouldn,t recommend it as the listener will be disappointed.

Completely unrealistic story and cringeworthy that anyone could come close to believing it. Immature writing style with two dimensional characterisation - everyone is either really nasty of really nice. The narrator seemed to mirror this and was also very poor. The nearer I got to the end the more fanciful it became and the more I wanted to give up. I should have.

A really good book totally spoiled by awful narration. The narrator seemed to be in a rush which did not do the book justice

This is probably not the book you're looking for!

Would you try another book written by A. J. Waines or narrated by Melissa Chambers?

Before answering the question I'd like to make other Audible listeners aware that this is not the book that has been made into a film. That would be 'The Girl on The Train'. 'The' not 'A'! I feel a bit silly for having made that mistake myself and don't want other people to waste their money.
Right, back to the review. I'll be as kind as possible even though I feel a little bit duped. Is this book deliberately trying to ride on the back of the other book's success? I mean, look at the similarity between the images used. Sorry, off track again. Track. That's a train pun. This is turning out to be the worst review I've ever written but it's a work of literary genius compared with A. J. Waines offering 'Girl on A Train'. So, no, I won't be trying another book by the same author. The narrator, however, was actually pretty good. Only one of her accents made me giggle a little bit every time the characters came up. If you've listened to this book you can have a guess at which one. I could listen to her again I guess. She didn't make me want to bang my head against the wall. Not like one I listened to earlier whose voice got a bit spitty. I hate hearing other people's saliva. Melissa Chambers - non-spitty voice - ok with me.

Most interesting: Ellie's clues.
Least interesting: The main character's best friend's love life. Didn't care. Wasn't sure how it added to the story.

Did Melissa Chambers do a good job differentiating each of the characters? How?

Yes she was fine, except for one as mentioned earlier.

Was Girl on a Train worth the listening time?

Hmm, difficult one. Actually, I did enjoy the story as just that. A story. You could write down the main events of the book in a bullet point list and I would enjoy it just the same! The author's writing style lacks... well... style. The sentences convey the plot but aren't constructed to add anything atmospheric or clever. It's a good yarn but it's not a thing of beauty. In places it sounds like it has been written by a 14 year old girl.

Just in case you missed it at the beginning, this is not the book that has been made into a film. If you were looking for the genuine article, search for 'The Girl on The Train'.

I said I was going to be kind. I don't think I managed that, sorry. Honesty is always best though...

Look at the title carefully before purchase. Also, wasn't too enamoured with the narrator. A 9 year old girl from Stockwell does not usually speak with a Knightsbridge accent. A really average book, not the blockbuster I though I was buying!

Girl on a train

really enjoyed this book the narrator was really good. I was on the edge of my seat listening to this couldn't put it down

Gripped from the start!

I loved this book, I didn't guess the final outcome which is good for me.. fabulous listen, highly recommended and great narrator.

What a let down

Started well, ended like a rejected ScoobyDoo script. The narrator seems to give up too, sounding more and more like an auto-reader in a Word document.

Girl on a Train

I really don't k now what all the hype was about. I stuck with it but feel I could have been enjoying something else more. Thank goodness for Audio. At least I was doing other things whilst listening.

Reasonable storyline, but not deftly written. Melodramatic and disjointed. Was disappointed at amateurish feeling overall.

I had been recommended this book and it was on my to-read list for the last year, but I found the (audio)book sorely disappointing: the narration was fairly flat (it is particularly dreadful when the story becomes more stylized and dramatic), and the ending is utterly unbelievable. I actually laughed out loud near the end, which is probably not the intention of the author.

The main character came across as judgmental and frankly, unpleasant -- as are most of the other characters. Worse, the author seems to be harshly critical of women and their bodies; in fact, the language to describe the bodies of larger women made me cringe. It was almost hateful.

The written prose is probably on the level of any Dan Brown novel (take that as you will). I would consider it a passable diversion, but will not be recommending it to any of my friends.

A train, or THE train? This is the better novel

Girl on A Train or The Girl on The Train? The second one got all the big reviews and superlatives: this one, however, is much more readable and fun. "The Train" one has as its heroine a drunken sot: neurotic, self-pitying, obsessive, dipsomaniac, acutely embarrassing to watch, never mind identifying with, forget that. This novel by A.J. Waines has a heroine with character who is liked by all, and no wonder.

It is obvious quickly why this woman's husband left her -- apparently committed suicide, in fact. The usual thing; and it's so easy I was worried the whole novel wouldn't be worth thought. Whoops, that was wrong: it's a puzzle novel with depths on depths, and you will NOT foresee whodunnit: Nope, won't happen. This novel is a lot of fun and is well read and possible to follow read aloud. So enjoy.

I really enjoyed this story. It was complex and multi-layered.

After realizing I'd purchased the wrong book, I listened anyway and was pleasantly surprised. I actually like it better than the one that was made into a movie.

I listened, but really did not care for this novel. It is written in such a way that there is no room for speculation on the readers part, which makes for a boring mystery/thriller/suspense. It did not invoke much if any thought, and the reader must sit back as things are revealed that are either obvious or ridiculous. I feel like there were multiple elements to the story that could have made for a great novel, but the author was not able to get them to come across in a cohesive manner. I think this novel could have been enhanced by the narration, but this narrator did not pull that off.

Dont get confused with Paula Hawkins 'Girl On The Train.'
But a great story regardless!

unknowingly it turned out to touch on some very personal issues, and cause a few tears of my own.

good story. Every detail has impotence on a long rabbit trail. I now must see the movie

I was told this was a very scary story, but actually it was more intriguing. There are a lot of twists and turns, but spellbinding and a good read.

Got the wrong book

I thought I was buying The girl on the Train. I saw the movie and I really
Inked it. Don't make the same mistake. This book starts slow and never gains momentum. The characters are not fully developed and are unappealing.