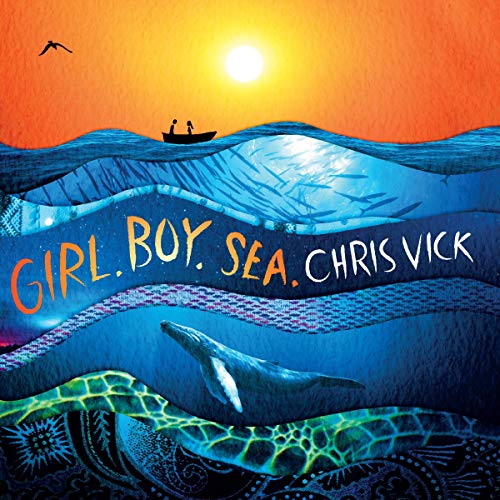 A British boy narrowly survives the sinking of his yacht in a huge storm off the coast of Morocco. After days alone at sea in a tiny rowing boat, Bill rescues a girl clinging to a barrel.

Aya, from the nomadic Berber tribe, was escaping to Europe when her migrant ship was destroyed in the storm. Through endless days and nights, they drift. Aya tells Bill about the Arabian Nights, and Shahrazad, who told 1001 stories to save her life. As hope of rescue begins to fade, they find strength in these tales of magic, brave heroes, wily thieves, greedy sultans, and courageous girls.

When they land on a desert island, they're surprised to be confronted by a stranger...and back out on the waves once more in the dark deep, a shadow follows. Storm, shipwreck, survival.

Chris Vick's novel delves deep into the might and majesty of the unpredictable ocean, the strength of an unlikely friendship between a British boy and a Berber girl and their will to survive against all the odds.

When is the film being made. Mustvreaf

Both kids 13 and 10 really enjoyed this book. Wonderful use of descriptive language.

Young 'Life of Pi', shades of Morpurgo - friendship in adversity.

An ocean-set drama of different cultures that bolster each other up through the toughest circumstances. A yacht sinks in a storm, with one boy left alone on a small boat. A few days later, a girl clinging to a barrel, from a very different world in Africa, causes him the moral dilemma of rescuing her or keeping his rations for his own survival.

Aya keeps Bill motivated, with her stories of Shahrazad and the 1001 Nights. The two hope for rescue, but have many hardships to conquer in the wide ocean world that surrounds them.

Lyrical and quite tender, their budding friendship will be tested, their survival never assured.

I found this quite slow-moving, but the references to the Arabian Nights intriguing and the similarities to Life of Pi and Morpurgo's Kensuke's Kingdom target the audience for me at 12-15 year olds. The narrator was quite gentle, making the Audible version a listen I had to concentrate hard on without, not to lose flow occasionally.

A Carnegie-shortlisted title, it won't appeal to every reader, but it does contain some beautiful writing and images.