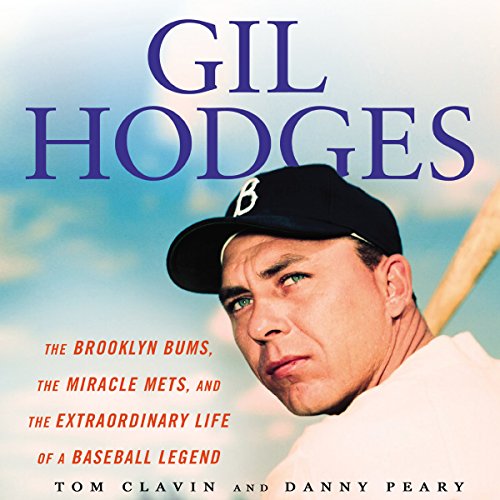 The Brooklyn Bums, the Miracle Mets, and the Extraordinary Life of a Baseball Legend
By: Tom Clavin, Danny Peary
Narrated by: Kris Koscheski
Length: 14 hrs and 13 mins
Categories: Biographies & Memoirs, Celebrities
4 out of 5 stars 4.0 (1 rating)

Due to his achievements as a player and manager, as well as his sterling character, Gil Hodges deserves to be in the Hall of Fame more than any other player. A towering figure during the Golden Era of the 1950s, Hodges was the Brooklyn Dodgers’ powerful first baseman who, alongside Jackie Robinson, helped drive his team to six pennants and a thrilling World Series victory in 1955. Fans never booed the beloved home run hitter from Indiana who married a Brooklyn girl and settled in their borough, and they famously prayed for him when he slumped.

Dutifully following the Dodgers to Los Angeles in 1958, Hodges longed to return to New York City. He joined the original Mets team in 1962, and he finished his playing career with them. In 1968, he took over the manager’s spot on their bench. Under his steady hand, the Mets went from a joke to World Champions in 1969—the Miracle Mets.

Yet behind his stoic demeanor lay a man prone to anxiety and worry. Hodges was scarred by combat on Tinian and Okinawa during World War II, and his inner turmoil was exacerbated by tight pennant races and excruciating defeats. His sudden death in 1972 shocked his friends and family, and left a void in the hearts of baseball fans everywhere.

Acclaimed authors Tom Clavin and Danny Peary delve into one of baseball’s most overlooked stars, shedding light on a fascinating life and career that even his most ardent fans never knew. An exciting biography that paints a portrait of an amazing era of baseball as much as it does an admirable player, Gil Hodges is sure to please fans of America’s pastime.

I knew a little of Gil Hodges from reading other baseball history books. I really enjoyed reading more about him. This book is very well-researched with excellent sourcing. In today's world of sports, we need more athletes like Gil Hodges, who went about their business professionally, without antics and also led exemplary private and civic lives. The authors try almost a little too hard to convince us that Hodges belongs in the Baseball Hall of Fame. It's a strong case when viewed against the statistics and all-time rankings of the players of his time; no way would he get in by today's stats. No matter where we move the line, a player like Hodges will always be right below it. But I would be glad to see him get in.

Of course, we devoted fans of the sport, the stories about the Brooklyn Dodgers, NY Giants and Yankees are always nostalgic and fascinating. But equally interesting were the stories about the Dodgers' move to L.A. (Hodges came with them) and those early years playing at the odd L.A. Coliseum. Beyond that, it was just as interesting to read about Hodges' manager jobs for the hapless Washington Senators and then the Mets, including the 1969 world champion Miracle Mets. His early death---attributed as a heart attack---was just a sad event. I wish he had lived much longer than 48 years.

The reader does a pretty good job except when he tries accents, especially whatever accent he was trying to conjure when he interpreted quotes by Hodges' wife. I think it was supposed to be some kind of New York or Brooklyn accent, but it sounded more southern than East Coast. Atrocious. He should just have read all the parts straight. Outside of that, he did pretty well.

Entertaining, informative and deeply moving. This book does a fantastic job of showing the man behind the famously stoic expression. A must for fans of the golden era, the Brooklyn Dodgers, Miracle Mets or baseball in general.

Remember the "Boys of Summer

Although never a big Dodgers fan I have always appreciated the history of the team, it's players, managers and fans. Gil Hodges was the soul of the team during his time there and this biography captures the flavor of the times along with the story of Gil's life. Anyone with any interest in the history of the game and its meaning to American culture will find this book entertaining and informative. It is jammed with hitherto unknown nuggets of information about Mr. Hodges, his teammates and baseball in general. The narrator mispronounces a lot of words (my pet peeve - how hard is it to look up a word in the dictionary?) and does a horrible job imitating accents, but the story and pace are excellent. A FOUR BAGGER for baseball afficionados!