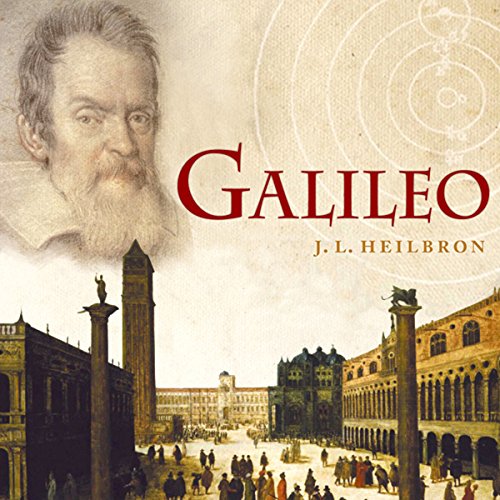 In 1610, Galileo published the Siderius nuncius, or Starry Messenger, a "hurried little masterpiece" in John Heilbron's words. Presenting to the world his remarkable observations using the recently invented telescope - the craters of the moon, the satellites of Jupiter - Galileo dramatically challenged our idea of the perfection of the heavens and the centrality of the Earth in the universe. Indeed, the appearance of the little book is regarded as one of the great moments in the history of science.

Planned to coincide with the 400th anniversary of the publication of the Starry Messenger, this is a major new biography of Galileo, a fresh and much more rounded view of the great scientist than found in earlier works. Unlike previous biographers, Heilbron shows us that Galileo was far more than a mathematician: he was deeply knowledgeable in the arts, an expert on the epic poet Ariosto, and a fine lutenist.

More important, Heilbron notes that years of reading the poets and experimenting with literary forms were not mere sidebars - they enabled Galileo to write clearly and plausibly about the most implausible things. Indeed, Galileo changed the world not simply because he revolutionized astronomy, but because he conveyed his discoveries so clearly and crisply that they could not be avoided or denied. If ever a discoverer was perfectly prepared to make and exploit his discovery, it was the dexterous humanist Galileo aiming his first telescope at the sky.

In Galileo, John Heilbron captures not only the great scientist, but also the creative, artistic younger man who would ultimately become the champion of Copernicus, the bête noire of the Jesuits, and the best-known of all martyrs to academic freedom.

The title music in this audiobook is Ave Maris Stella by Claudio Monteverdi, which was published in the same year Galileo published Sidereus Nuncius (i.e. The Starry Messenger). Ave Maris Stella was performed using period instruments by the Green Mountain Project. We’re especially proud to note that a member of the Green Mountain Project, Hank Heijink, also works at Audible!

What listeners say about Galileo

I downloaded this hoping for an insightful biography of a famous man and some clue as to what exactly he had achieved to deserve such fame. All of that is here, but there is a great deal of detail on the various theories and ideas he proposed or discussed, and to be honest it sometimes read more like an A-Level textbook than a pleasureable and informative read. At various stages the text discusses his work on geometry, and frequent references are made to diagrams which, being an audio book, the listener cannot see. You then get a long dialogue telling you about A, B, C and the line G to H, and so on, none of which make any sense without the diagram in question, although frankly it would not make much more sense to me if I did have them. Some mention of Galileo's geometric work is fine as it is part of the man and his legacy, but great swathes of this kind of detail was too much for me and, I suspect, for most general readers.

On his astronomical work the book is on firmer ground, as it is with the difficulties he had with the vested interests of the Church. However here too the long reproductions of conversations he wrote to discuss philisophical ideas are hard going.

In short then this is rather too heavy to be a generally accessible story of the man's life and work, which is what I was looking for. If you want to get heavily into the detail then this is for you (only have a paper copy for the many diagrams to hand), but for those with a more casual interest in the history of natural science this might be a poor choice.

The down-side to this was the fact that equations and mathematical figures had to be listened to, which probably gave me an insight into the challenges visually impaired people experience in a talk where mathematics is being used. But the biography was lyrically crafted, rendering the assiduous scholarship flow smoothly not only through the worlds of astronomy, mathematics and theology that Galileo's life coursed through and redefined, but also his music, poetry and literary taste including his fascinating (if crackpot) analyses of Dante's circles of hell. This is a scholarly biography, but it reads, and is read, flowingly, making it an engaging and rewarding listening experience.

Scholarly, but diagrams are needed

This book tells you everything you might need to know, in huge detail, about the man, his work, and the details of the cultural/political situation he worked in. It helps if you've got some grasp of Italian and European politics of the early seventeenth century and the nature of the Church during the counter reformation, as it is assumed that you have this background knowledge. The use of diagrams that you don't have to explain Galileo's work and thinking is bizarre. Sometimes, if the topic isn't too complex, you can imagine the diagram, but I couldn't do this for most of them. I'll probably try to get hold of a print copy to look them up later. All of that being said, if you want to really understand Galileo, where he was right and wrong, and exactly how he ended up in conflict with the church, this book will give you that knowledge.

Not much cop without the diagrams

I expected this to be a fairly dense listen but it is made unfathomable without the illustrations setting out much of the geometric work.

Unless you're prepared to skip the actual science, I'd recommend you read the actual book

It's not exactly an audiobook...

because you'll need to spend plenty of time reading the download PDF. If you're not in a time and place where you can read the PDF, the audio will sometimes make no sense.

An immensely bloated and boring book. The limited relevant information is merely peppered among superfluous mathematics poorly explained and not suited for an audiobook. The primary sources of Galileo (notably his dialogues) give a better representation of his personality than this dry audiobook. It reeks of Aristotelian scholasticism aka BOREDOM.

Stick to the printed version

This particular work is not well suited for an audio book because of the extensive references to formulas and diagrams apparently in the hard copy version. The narrarator actually reads from geometric diagrams by line segment notations. It's appeal is further limited by recitation of extensive passages from Galileo's dialogues and letters. There are some interesting insights into Galileo's broader interests and accomplishments. Galileo fans should stick to the bound version of this one.

I read a lot of history and biography. I made it through the first hour before I gave up. It was like the reader dropped the pages on the street and didn't bother putting them back in order.

A Difficult Book for Audible

First, the book has a great deal of detail and is extremely informative. That is the good part. The bad part, for me at least, is that the book contains many mathematical formulas and all of them are read out loud. I'm not saying I could understand them even if I looked at them, but listening to them is incomprehensible to me. Also the author refers to drawings and points on the drawings have letters, so there is a great deal of "the lever at point 'h' is swung to 'l' " etc. It makes no sense without seeing the drawing. Also if you get the book, you must be prepared for a great deal of discussion about physics and mathematics. It's really more scientific history than just a biography. It's well done, but perhaps not a good choice for an audible book.

I wanted to hear the history of Galileo not a bunch of equations read out like I was in a Victorian arithmetic class. This book is not suitable for audible

the book relies heavily in parts on the pdf with its diagrams, sketches etc- and I don't walk around listening to a book with a lot a paper to look at.

The author underplays the horror- and no other word properly conveys what the church did- of how Galileo was mistreated, lied to and denied medical treatment by the church.

The book was OK, but gave way too much detail about unimportant topics, such as Galileo's various astrological forecasts. I don't even know that it is worth two stars, but given that there are so few recent biographies on Galileo I suppose it is worth the two.