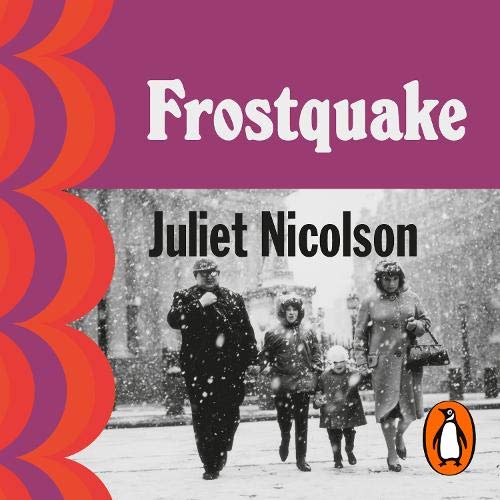 By: Juliet Nicolson
Narrated by: Lucy Briers
Try for £0.00

On Boxing Day 1962, when Juliet Nicolson was eight years old, the snow began to fall. It did not stop for 10 weeks. The drifts in East Sussex reached 23 feet. In London, milkmen made deliveries on skis. On Dartmoor 2,000 ponies were buried in the snow and starving foxes ate sheep alive.

It wasn't just the weather that was bad. The threat of nuclear war had reached its terrifying height with the recent Cuban Missile Crisis. Unemployment was on the rise, de Gaulle was blocking Britain from joining the European Economic Community, Winston Churchill, still the symbol of Great Britishness, was fading. These shadows hung over a country paralysed by frozen heating oil, burst pipes and power cuts.

And yet underneath the frozen surface, new life was beginning to stir. A new breed of satirists threatened the complacent decadence of the British establishment. A game-changing band from Liverpool topped the charts, becoming the ultimate symbol of an exuberant youthquake. Scandals such as the Profumo Affair exposed racial and sexual prejudice. When the thaw came, 10 weeks of extraordinary weather had acted as a catalyst between two distinct eras.

From poets to pop stars, shopkeepers to schoolchildren, and her own family's experiences, Juliet Nicolson traces the hardship of that frozen winter and the emancipation that followed. That spring, new life was unleashed, along with freedoms we take for granted today.

"This book is a must." (Peter Hennessy)

What listeners say about Frostquake

An interesting listen - but why on earth didn’t the producer correct Lucy Briers on her pronunciation of ‘nuclear’? It was a word that cropped up many times and every time she said ‘nucular’. Drove me bonkers!

I was drawn to the book because my mother (now 87) often refers to this winter. As I was just one month old when the snow began to fall, I have only her memories upon which to draw an opinion. She often talks about leaving me with a neighbour whilst struggling to take my older brother (then 5) to school. The book focuses more widely on the events on both the world and domestic stages including the relationship with the USA and the Soviet Union, and of course the Profumo affair. It's interesting to see the shift in attitudes from 1962/3 when gay men lived in fear of prosecution or worse. The book uses examples such as these to show the shift in attitudes towards the establishment which were forever changed in 1963. I found the book enjoyable with one minor irritation. The Word is "nuCLEAR" not "nu CU LAR" as pronounced by the narrator.

For me, a lazy and rather annoying book. Neither Dominic Sandbrook/David Kynaston style deeply researched cultural history, nor personal memoir, but a halting and somewhat cliche-ridden halfway house. And based on a faulty premise - that somehow Britain emerged, changed, from the long winter, because of a long period of icy weather - which it clearly didn't. It has the feeling of a "good"' idea dreamed up in a meeting, which then has to face the light of day. But then others might enjoy it more than me!

Nicely read, this was a bit of a rag bag which loses sight of its title. Some of the changes in society which coincided with the icy winter of 1962 were not a consequence or even much related to the hardships of the winter (the Cuban missile crisis; the treatment of homosexuals). The mix of social history, personal memoir and journalistic coverage of the frozen winter doesn't meld and the author seems to have lost sight of whatever structure for her premise she had. Some topics take over and are covered in far too much detail - the rise of the Beatles, for instance, which includes much banality and which she kept returning to with what became for me tedious regularity. Although at least Sylvia Plath did suffer through that winter, interesting as it is, she has too much detailed coverage which loses sight of the link to the book's purpose. Interesting as it is, the Profumo affair plays a huge part in the book but doesn't seem to be clearly related to either social change or the winter weather.

That said, there's a great deal to enjoy in this book and it is extremely well written - certainly worth reading for its vivacious mass of always interesting but not very well organised material.

The descriptions of the severe weather all over the United Kingdom are vivid and dramatic - one of the families stuck in their cars overnight included a family of parents, children and grandparents with the grandmother dying of the cold before rescue. Staggeringly large numbers of animals (wild and in zoos) and birds perished; milk couldn't be collected and a milk float driver died on his round; rivers froze... The personal memoir is interesting - the author experienced that winter as a child at Sissinghurst the home of her grandparents Harold Nicolson and Vita Sackville West. The grief of her grandfather when his wife died is deeply poignant with the haunting image of him roaming round the house calling her name and weeping alone when he thought no-one could hear.

I really enjoyed the descriptive writing, together with the social, political and environmental sections. However I did think the author over did the personal memoirs. Perhaps relying too heavily on her well known family's historyand reputations.

You could argue this is social history, Sissinghurst style, which is in (small) part. But, being a child of the sixties, this said really very little I didn’t already know, apart perhaps from where and how Harold Evans got started.
There was very little if any new slants on what happened in the winter of 62/3 so ultimately, although I wanted very much to like this book, I came away with the sad conclusion that this was little more than a glorified cut-and-paste job.

Enjoyed being taken back to the 60s and all the events of those times. Really well read.

Somehow the book veers uncomfortably between history and memoir, although it is at times quite evocative. The narration is marred by an irritatingly persistent mispronunciation of the word “nuclear”.

Enjoyed this book,well read using the main theme of the frozen winter of 1962.
Throughout this freezing winter the book dips in and out of many interesting news events of the time.
I would recommend it .