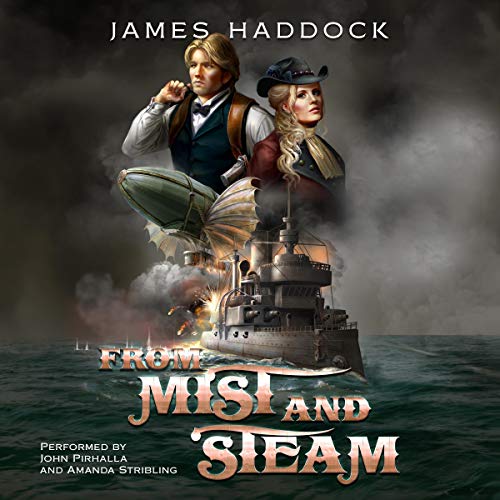 From Mist and Steam

By: James Haddock
Narrated by: John Pirhalla,Amanda Stribling
Try for £0.00

Searching the battlefield after a major battle, Sgt. Eli finds a dead Union Army messenger. In the messenger's bag is a message saying the South had surrendered, the war was over. Along with the Union Messenger was a dead Union Captain carrying his discharge papers, and 8,000 dollars.

Sgt. Eli decides now is a good time to seek other opportunities, away from the stink of war. While buying supplies from his friend the quartermaster, he is advised to go to St. Louis. Those opportunities may lie there and a crowd to get lost in. Sgt. Eli, becomes Capt. Myers, a discharged Union Cavalry Officer, and strikes out for St. Louis.

The war has caused hard times and there are those who will kill you for the shirt you are wearing. Capt. Myers plans on keeping his shirt, and four years of hard fighting has given him the tools to do so. Realizing he must look the part of a well-to-do gentleman, he buys gentleman clothes, and acts the part. People ask fewer questions of a gentleman.

What he isn't prepared for is meeting an intelligent Lady, Miss Abigale Campbell. Her father has died, leaving the family owned shipping business, with generation steam-powered riverboats. They have dreams of building steam-powered airships, but because she is a woman, there are those who stand against them.

Capt. Myers' fighting is not over, it seems business is war. They decide to become partners, and with his warfighting experience, and her brains the world is not as intimidating as it once seemed.

What listeners say about From Mist and Steam

I can't say enough about this book it is amazingly well written this is a story I will come back to again and again. like many of Paddock books it grabs you and you can't put it down.

I really enjoyed the storyline. Black hats readily recognized, opertunities presented and taken. When is book two coming out?
Narrators were good and added new dimensions to the tale.
Great escape fiction, to bad the ending was cliff hanger.