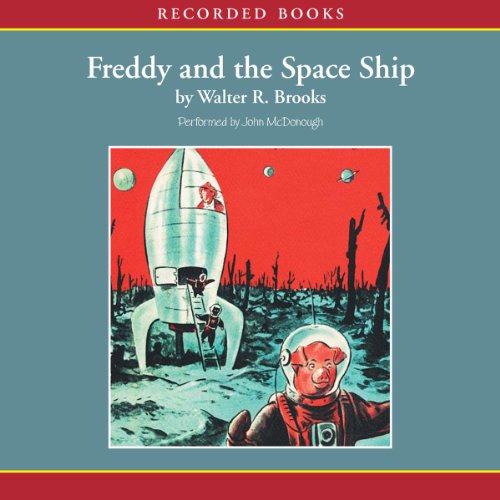 Freddy and the Space Ship

Freddy and the Space Ship

Acclaimed author Walter R. Brooks is beloved for his Freddy series. In this tale, Freddy and his friends decide to take a trip to Mars. However, things go a little haywire, and Freddy and his pals are knocked off track. This is when the fun begins. John McDonough's festive narration makes listeners feel a part of Freddy's crew to Mars.
Listen to more of Freddy the pig's adventures.
©1981 Dorothy R. Brooks (P)2001 Recorded Books, LLC

How good is that? It's great!! One problem: He sounds old. So old. Really old.

Out of this world!

Freddy and the space ship is the Freddy book I recommend! I wonder why I eat pigs?

Not as good as the other Freddy books

I read most of these Freddy books as a child, and now that I have children of my own I have an excuse to experience them again. I just love listening to them with my son.

But this one caught me a bit off guard. It's interesting from a historical point of view, because of the attitudes of the characters. When they set out for Mars, they intend to colonize the planet and put the citizens under the authority of the United States government. And when Freddy runs into someone from "Mars" for the first time, one of his first reactions is to shoot! I usually enjoy pointing out to my kids how life was so much different - how the bank has a watering trough in front of it (for the horses), and how there are no interstate highways in these books. But I had a much harder time with imperialism and "shoot first" attitudes.

As usual, Walter Brooks spins a good yarn, and John McDonough narrates wonderfully. I just found myself shaking my head a bit during this one.