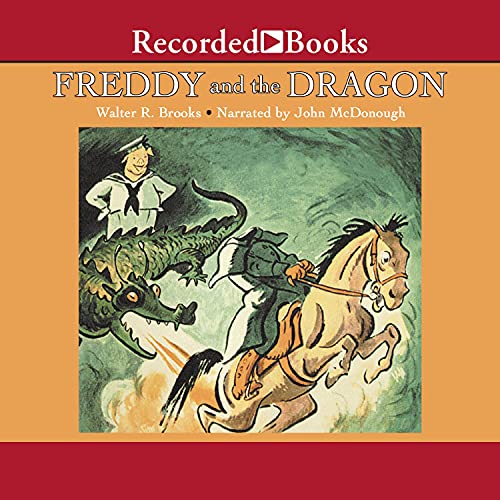 Freddy and the Dragon

Returning from a riding trip through New England, Freddy the pig, Jinx the cat, and Samuel Jackson the mole are surprised at the cool reception they get from the people of Centerboro. It seems that some animals have been raiding gardens, stealing bicycles, and breaking into houses. And they'e led by a pig that matches Freddy's description!

As folks grow more and more upset, the animals of Bean Farm urgently try to uncover the true culprits before Freddy gets thrown into jail. But to solve this mystery, Freddy and friends are going to have to find a way to defeat a headless horseman--with the help of their own special dragon.

What listeners say about Freddy and the Dragon

Love it! These Freddie audio books are well worth the money. Just wish they recorded more!

A Good Book Once You Think About It

Would you listen to Freddy and the Dragon again? Why?

I would listen to Freddy and the Dragon again. I like it when Jinx explodes from the wall near where the headless horseman comes.

What other book might you compare Freddy and the Dragon to and why?

Freddy and the Dragon is similar to Freddy and Simon the Dictator because both of the stories have a cave in them.

John McDonough spoke clearly and made different accents for the characters.

Freddy and Jinx went to the duck pond and heard that Alice and Emma were not afraid of the headless horseman. It was funny because they had been scared.

This book is good to read/listen to after Freddy and Simon the Dictator.

Fantastic book, as is every book in the series. The narration makes the story better, if possible. 10 out of 10 recommend!