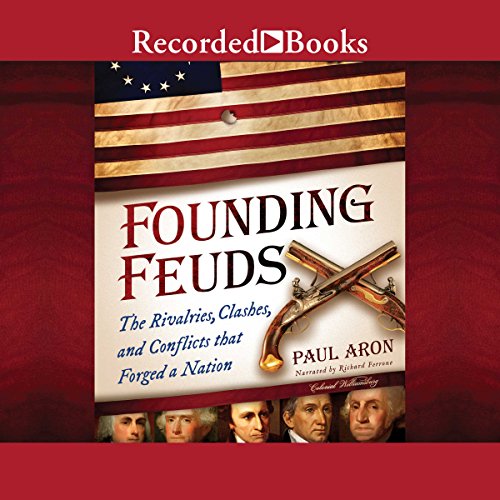 By: Paul Aron
Narrated by: Richard Ferrone
Try for £0.00

The Founding Fathers have been hailed for centuries as shining examples of men who put aside their own agendas to found a nation. But behind the scenes, there were more petty fights and fraught relationships than signatures on the Declaration of Independence.

From the violent brawl between Roger Griswold and Matthew Lyon in the halls of Congress to George Washington's battle against his slave, Harry Washington, these less discussed clashes bring to light the unpredictable and volatile nature of a constantly changing nation. Additionally, this gripping narrative delves deeper into the famous feuds, such as the fatal duel of Alexander Hamilton and Aaron Burr, and the many rivalries of Thomas Jefferson (which were as often personal as political).

America's great forebears fought with each other as bitterly as our politicians do today. Founding Feuds reveals the true natures of the Founding Fathers and how their infighting shaped our nation as much as their cooperation - in fact sometimes even for the better.

What listeners say about Founding Feuds

I began this book as a result of a friend’s recommendation. Each chapter offered me an insight into the depth of the character of each founder!s feud(s). Shall I say my eyes were further opened in our history of those we were to view as men of pure character! Alas, as is life this cannot be true. All possessed flaws; all were not of pure standing. Yet this book has afforded me the continuation of learning truths.