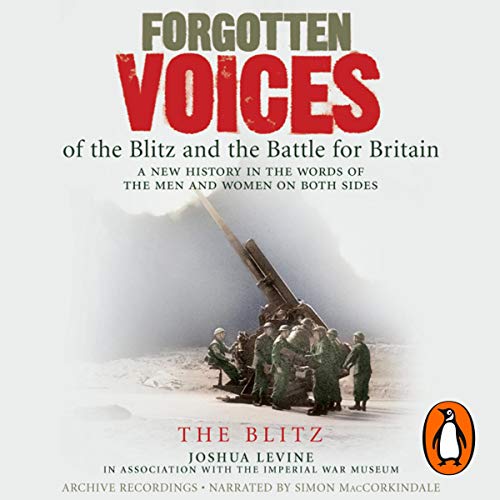 Forgotten Voices of the Blitz and the Battle for Britain

From July to September 1940, the British people watched the Battle of Britain play out in the skies above them, aware that the eventual outcome would decide their fate. From September through to the following May, Hitler attempted to "blitz" London and other major cities into submission. For a year, the citizens of Britain were effectively front-line soldiers in a battle that united the country against a hated enemy. Despite the terror, destruction, and heavy casualties, the British people survived the onslaught, until May 1941, when Hitler re-directed his attention, and that of the Luftwaffe, to the campaign in Russia.
© Joshua Levine and the Imperial War Museum; (P) Random House

Featuring testimonies from the people who were there plus a wonderful narration from Simon MacCorkindale, this was a really stunning listen. I will listen to it again I'm sure. Wonderful.

I never knew what the brave men and women of Britain went through during the war. This was an aspect of history that was totally unknown to me. I am so inspired by these stories and these people. I especially loved hearing the voices of those who experienced the war, and not just a narrative. Wonderful!