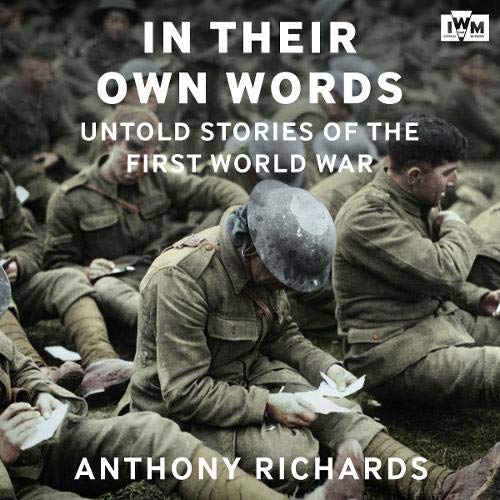 In Their Own Words

The First World War was the defining event of the last century. It claimed the lives of more than 16 million people across the globe and had an enormous impact on all who experienced it. No nation in Europe was left untouched, and even neutral states felt its devastating impact.

Yet it was the ordinary men and women who were affected the most.

This gripping, revealing and poignant collection of stories tells the First World War from the perspective of those who were there, using letters, diaries and memoirs from Imperial War Museum's unparalleled archives.

What listeners say about In Their Own Words

I couldn't stop listening to this audio book until I had too. Truly Fascinating insight to real peoples lives during these horrid times.

This production by the IWM is a excellent insight into the many aspects of life during the Great War, for a variety of people. I greatly enjoyed the book, no doubt I will listen again. It was especially pleasingly that you were told what these different people did following the end of the War. I will look for more books by this author.

Brings life to what is often a full story

I have read other books about WWI and they almost all leave me bored and wanting. Most stories about the times are either a recitation of facts and figures or a mind numbing attempt to explain the politics and strategy of the war. This book uses the diaries of those who lived through the war both combatants and those on the home front. It brings life to the story, let's you feel what it was like to be there and what the culture of the period was like. Would love to see similar books from the German, French and American point of view.