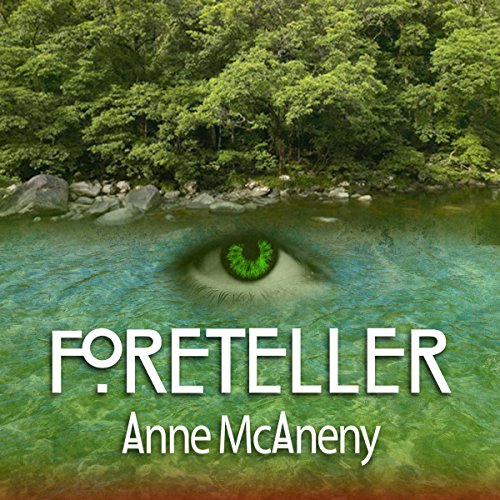 With her present-day life in upheaval, the last thing archaeologist Zoey Kincaid needs is a 25-year-old letter carrying a message of doom. Forced to dust the cobwebs from her own shadowy past, Zoey uncovers crimes, deception, and buried family secrets, but will she put it all together in time to ensure a future?

The letter, from her deceased mother, describes a dire set of occurrences on the banks of the Schuylkill River in Philadelphia. Unbeknownst to Zoey, her mother belonged to a select group of foretellers: people affected by tainted water who could see beyond normal timelines.

Zoey then learns that a recently arrested criminal may be her real father.... With her DNA as the only hope for the man's conviction.

Things go from bad to worse. Zoey's fiancé behaves irrationally; the criminal learns of her existence; and a former stalker, now a powerful corporate titan, resurfaces. The more secrets she unearths, the more foretelling gains credibility. With suspects in every direction, Zoey must force herself to believe in a mother she barely knew in the past to give her any hope for a future.

Surprising in a good way!

I was very surprised by this book. I've had it in my wish list and then was offered a chance to read for review and I'm so glad I did. It really kept my attention and the story was mesmerizing and different. The narrator's voice was lovely and very much added to the experience. Zoe is presented a letter from her deceased mother on her 29th birthday and so the story begins. The boyfriend was a jerk and Zoe a doormat but loved all the other players. Did get a little draggy toward the end but but quickly passed to a happy (?) sad (?) ending, no spoilers! Well worth the time!

Foreteller or Listen to your Mother

Story is a solid listen. Not a twisting and turning book. Instead, clues are dropped for readers/listeners to pick up.
I listened on and off on a Saturday as I worked in my garden.

Another great story by McAneny

Where does Foreteller rank among all the audiobooks you’ve listened to so far?

Audiobooks need not only have a great story but also a talented narrator. I found Foreteller to have both which is why I gave 5 stars.

Zoey is portrayed as a strong female character who handles the twists and turns with grace and intelligence. She also maintains loyalty to those she cares about and is put in a position to trust the foretelling of her deceased mother who has not been in her life since she was a toddler.

It did not make me laugh or cry but I wanted to keep listening to find out what would happen next.

This audiobook was provided by the author at no cost in exchange for an unbiased review. I was thrilled to be able to review this book by McAneny as the last book I listened to was by this author ("Raveled") which I really enjoyed. This audiobook did not disappoint.

A well written book.Laura Jennings does a great job with the material.Zoey is an archeologist. She is called to an attorneys office to recieve a letter from her deceased mother to open on a certain day.It foretells a murder on the banks of the Susquehana.She knew nothing about fortelling before the letter.She grew up being lied to by her Aunt and grandmother.Can she trust a 25 year old letter?I loved the twists and turns in this book!
This audiobook was provided to me at no cost for a fair and honest review

This was an amazing story, absolutely breathtaking. Author Anne McAneny has written an extraordinary story, unique, and filled with so much intrigue. This is one story that you won't forget for a long time to come. This story shows just how talented Anne truly is. She has s HUGE, vivid imagination as it shows throughout her story. This story touched me in a way that most stories don't. It is a beautiful story, yet there's many secrets, mystery throughout, and it contains a bit of a paranormal/supernatural twists along the way. A story that I highly recommend everyone should read but if you want this story to touch you as it did me, then you really should listen to it.

Laura Jennings did a fantastic job with her performance of Foreteller. I felt this story come to life as she gave her take on it. I would listen to more stories that Laura Jennings has narrated. As I listened to Laura narrate this story I could feel Zoey's emotions as she told the story. I felt her shock, her anxiety and panic, and I felt her as she found solace in what she's learned and finally found true. The narrator did an excellent job with distinguishing accents and voices also. Overall, I rate this a perfect 5 star rating!
I received this audio at no charge from the author/narrator in exchange for an honest and unbiased review through Audiobook Blast.

Would you listen to Foreteller again? Why?

Maybe, in a few years after I've forgotten bits of the story or if I didn't have access to many other books to listen to. It is a good book, but not one I'd readily listen to over again.

What other book might you compare Foreteller to and why?

Maybe the play Julius Ceaser; because of the warning to: 'beware of the ides of march' This book also has a foretelling warning for the heroine.

Which character – as performed by Laura Jennings – was your favorite?

The villain was well performed. I also liked the performance of the detective and his Imbecilic sidekick.

I was pretty much able to figure out most of the climax, which may of come as a surprise for some readers/listeners. I do like mysteries where there are enough clues to figure things out, but not so many clues as to figure things out to easily. The ending was happy and positive, and do like positive, happy endings. It didn't make me laugh or cry, however I had a sense of warmth for the outcome of the heroine.

“I was provided this audiobook at no charge by the author, publisher and/or narrator in exchange for an unbiased review via AudiobookBlast dot come”I thought the explanation for the heroine's mother's psychic abilities was hokey. I mean her mother became psychic due to drinking tainted water as a child that had messed up her brain chemistry. A genetic explanation to me would of made more sense. The grandmother who raised the heroine discounted both of her daughter's psychic abilities and was in denial and embarrassed by her daughter's psychic gifts. The aunt self treated by becoming an alcoholic and denying her abilities. The grandmother told her granddaughter that her deceased mother had been a crazy compulsive liar. I just feel that denial of a family trait that the grandmother didn't inherit would of made more sense than the heroine's mother and aunt consuming contaminated water.

Very entertaining paranormal mystery, the ending took me by surprise. The only complaint I have with this book is: Cesar's stalking of Zoey was never really explained satisfactorily, I wasn't sure if he was supposed to be psychic or just plain crazy. The narrator, Laura Jennings, was very good.

I received this audio free from the narrator for an honest review.

This is my first time with this author, Anne McAneny and she can really pull you into her imaginative tale and suspense. She creates wonderful participants fully developing her characters while dolling out clues to hold your interest and keeping you on the edge of discovery. The narrator, Laura Jennings has a great voice that holds your attention. All in all, if you want to grab your headphones and listen to an exciting adventure, than grab your audible copy of Forteller now, I sure enjoyed every minute of it.

I received a free copy of Foreteller written by Anne McAneny, and narrated by Laura Jenning in exchange for an unbiased review. &quot;This review copy Audio Book was provided by the author/narrator/publisher free of charge via Audio Book Boom.

This author has written an intriguing story that was quite engaging. The story was a perfect mystery, and a gripping thriller. Laura Jennings did a great job reading, and bringing these characters to life.

Foreteller is worth a read if your looking for an original mystery or thriller to enjoy. Beware! It's hard to put down.

Best Story In This Series

This book had me completely fooled. All the twists and turns and false leads. Oh my!

What does Laura Jennings bring to the story that you wouldn’t experience if you just read the book?

Each narrator I've listened to that has performed this series has been amazing. Each brought their unique perspective to the stories. This narrator caused a lot of weird vivid dreams where I felt like Alice jumping down the rabbit hole. I don't know that I've ever crawled this deeply in a book.

I sure look forward to anymore books this author may write. All of her books I could picture as major motion pictures they are this good. This audiobook was provided by the author, narrator, or publisher at no cost in exchange for an unbiased review courtesy of AudiobookBoom.