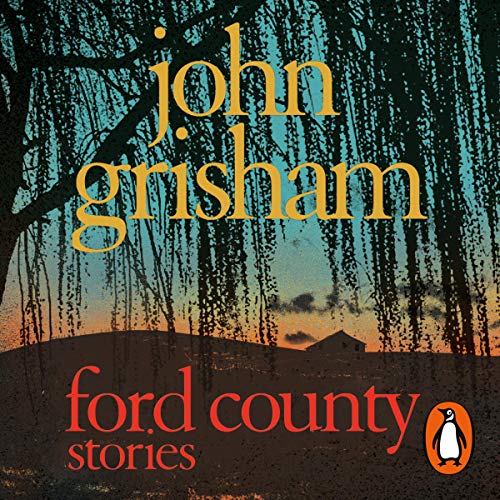 In his first collection of short stories John Grisham takes us back to Ford County, Mississippi, the setting of his first novel, A Time To Kill.

Wheelchair-bound Inez Graney and her two older sons, Leon and Butch, take a bizarre road trip through the Mississippi Delta to visit the youngest Graney brother, Raymond, who's been locked away on death row for 11 years. It could well be their last visit.

Mack Stafford, a hard-drinking and low-grossing run-of-the-mill divorce lawyer gets a miracle phone call with a completely unexpected offer to settle some old, forgotten cases for more money than he has ever seen. Mack is suddenly bored with the law, fed up with his wife and his life, and makes drastic plans to finally escape.

Quiet, dull Sidney perfects his blackjack skills in hopes of bringing down the casino empire of Clanton's most ambitious hustler, Bobby Carl Leach, who, among other crimes, has stolen Sidney's wife.

Three good ol' boys from rural Ford County begin a journey to the big city of Memphis to give blood to a grievously injured friend. However, they are unable to drive past a beer store as the trip takes longer and longer. The journey comes to an abrupt end when they make a fateful stop at a Memphis strip club.

One of the hazards of litigating against people in a small town is that one day, long after the trial, you will probably come face to face with someone you've beaten in a lawsuit. Lawyer Stanley Wade bumps into an old adversary, a man with a long memory, and the encounter becomes a violent ordeal.

Clanton is rocked with the rumor that the gay son of a prominent family has finally come home, to die. Of AIDS. Fear permeates the town as gossip runs unabated.

Featuring a cast of characters you'll never forget, these stories bring Ford County to vivid and colorful life. Often hilarious, frequently moving, and always entertaining, this collection makes it abundantly clear why John Grisham is our most popular storyteller.

What listeners say about Ford County

I couldn't get to the end of this book. Whoever thought it would be a good idea to get the author to read this book was sadly mistaken. He might be able to write good books but he has no ability to read them. I found his performance distracting, if not irritating. One of those books through which it is difficult to concentrate and follow the story. I was also disappointed with the stories, which quite honestly were bland.

The worst Grisham yet

As an avid reader of Grisham books since 'A Time to Kill' and 'The Firm' I usually snap up the latest offering without caring what each book is about but knowing that each book, whilst not as inspired as the two first books would be a good read. This was my first Grisham audible book. Not only were the stories shallow and uninspired, the characters poorly developed and the plots banal but sadly somebody allowed John Grisham to read the book himself. Big Mistake. He may be able to write but he cannot read. His timing is poor, he does not pause as the grammar dictates or read in a way that allows the story to flow. Rather his voice is thin and irritating, it lacks the gravitas of other professionals and when I struggled passed the issues of his reading style I could only conclude, 'Don't give up the day job Mr Grisham.'

Not a thriller, but great stories

There are seven short stories, each of which has a charm and character of its own. This isn't a legal thriller: it's a collection of incidents that happen to ordinary, plausible people.

John Grisham writes well, with compassion and depth, and the narrator brings the stories to life with excellent reading and voices. I enjoyed it thoroughly. It reminded me a lot of "The Last Juror" in terms of pace.

unfortunately whilst he is a superb writer, John Grisham is not a very good narrator! John sounds like he is reading a letter out loud that he has seen for the first time. it does detract somewhat from the enjoyment of the book. stick to the excellent writing and get an actor to do the narrative 👍

John Grisham is a Master story writer and whilst it was interesting to hear him tell the stories, he really should have these stories told by narrators like Dennis Boutsikavis or Michael Beck, Grishams delivery is like listening to the American version of Alistair Cook, great for factual descriptions but not good for delivering the characters.
Overall the stories are as usual just excellent.

If you are in the mood for short stories from your favourite wee town in Mississippi then this is the book fo you. Easy to listen too and great episodes that give you the feeling to be part of it all.

Grisham is not a bad narrator either

Great mix of small town tales. I loved it. Grisham reads well for a non actor

One star because its John Grisham - a brilliant writer usually but like 2 of the previous reviews - this one is dull and monotone without any suspence or thrill - this is not his usual brilliant penmanship. Maybe its because they are short stories and Grisham needs more time to develop the stories we love so much. I was vey disappointed.

Grisham sounds more like an Elvis impersonator than someone telling a gripping story, he pauses in the wrong places and is a dull monotone failing to bring the listener to feel that there is something to keep you listening.