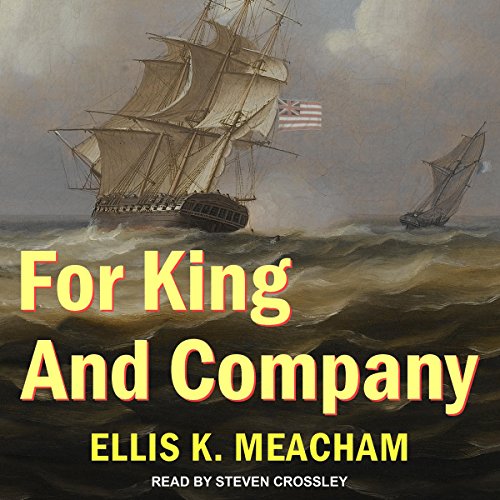 For King and Company

By: Ellis K. Meacham
Narrated by: Steven Crossley
Try for £0.00

They called themselves the Bombay Buccaneers - and under that flamboyant name they blazed a trail of daring and adventure from the Gulf of Oman to the waters of Macao. For courage, loyalty, and renown few of the Buccaneers could match their Captain, Percival Merewether, a brilliant seaman who was already the hero of a score of fabled sea-faring campaigns. Newly in command of the 36-gun frigate Pitt, Merewether is about to set sail again - this time on a voyage that would plunge him and his crew into new and ever more hazardous trials: a mutiny, a fierce-fought sea battle with the French, and a stormy encounter with the most ferocious pirate ever to hoist a flag: Madame Chin, scourge of the China Seas.

What listeners say about For King and Company

This is the last book in the trilogy. Our protagonist, Captain Percival Mereweather of the British East India Company’s Bombay Marine, takes command of the company’s ship Pitt. Mereweather quells a mutiny and has to deal with an overbearing first lieutenant. The story covers the Gulf of Aden, Bay of Bengal and the South China Sea. There are, of course, a great variety of pirates such as Arabian, Malay and Chinese along with the French Navy’s ships to deal with. There is lots of sea action with storms and sea battles.

The book is well written and the plot twists and turns. Meacham has good prose and interesting characters. It is most unfortunate the author died before completing this series. Meacham is a great story teller. I love stories of sailing ships and the Royal Navy in the Napoleonic era.

The book is almost fifteen hours long. Steven Crossley does an excellent job narrating the book. Crossley is an actor and award-winning audiobook narrator.