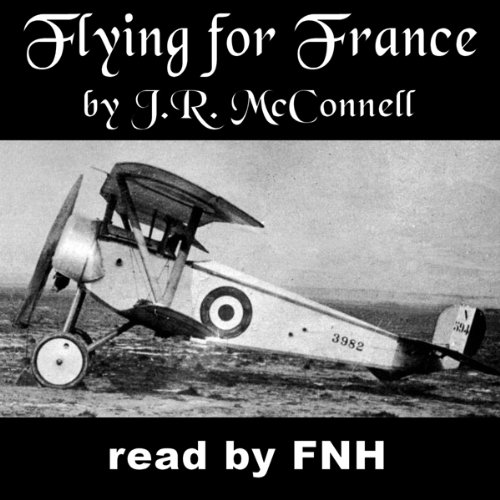 FNH Audio presents a complete and unabridged reading of Flying for France. Covering the war-time activities of THE American Escadrille.

During World War I, before America entered the war, many Americans volunteered to fight for the French. These valiant volunteers fought in all arms of the French services and not least in the air. Formed into air units of their own, these Americans trained, fought, and died together, fighting for freedom and liberty.

This audiobook was written by one of these volunteer fighters. As well as this first-person narrative, which describes the training and the combat, the latter chapters include letters written by and between the pilots.

What listeners say about Flying for France

This is a view of a long gone era. When young men searched for adventure of an exilerating level as well as achallenge. that came with the advent of the first flying machines of World War One. Where these young men had nothing more than canvas and wire in an absoulute fragile flying machine. These men found new levels of bravery which included chivalry , bravery , honour and a gentlemanly unwritten conduct for this new founded air war fare. Though all that was to change as the war progressed and more efficient ways to die alone were being learnt. These young men had no parachutes and most weapons for their aircraft were implimented by a pilots idea. However. Lsten to this audiobook and discover how these men lived, loved and died. Often unkowingly by their friends and squadrons. Having a damaged and fragile canvas covered aeroplane flying over the trenches on the wrong side. Leaves not a lot to the choices these men had to live and fight another day. Chivalry still lived,just, though as this war progressed very little survived of that past age. As most of these young men were rotting corps within the turmoil of no-mans land and often in sight of both armies. Well worth a listening to even if just to get an idea of what was involved within the two week expected life span of a pilot on a front line squadron in the first world war.