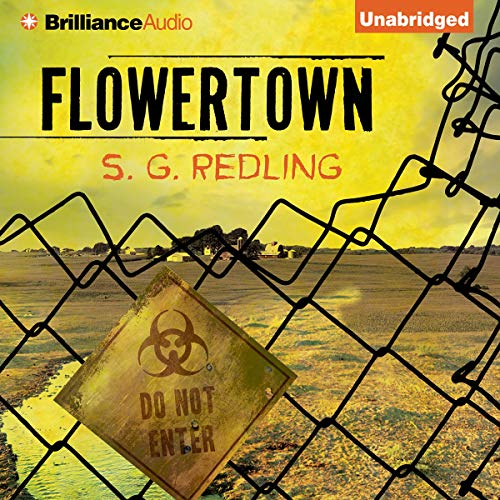 Seven years ago, a chemical spill brought the U.S. Army to rural Penn County, Iowa, where soldiers established a long-term, medically maintained quarantine. Officially, it’s called the PennCo Containment Area. But to the people trapped inside, their bodies tainted with chemicals that give off a sweet smell, it’s known simply as Flowertown.

The quarantine was supposed to save their lives, but many of the survivors have grown suspicious of the government’s real motives. But not Ellie Cauley - her rage long ago burned down to hard, cynical pessimism. When a series of deadly events forces Ellie out of her apathy, she must prepare to face an enemy powerful enough to unleash her greatest nightmare.

The overall plot is a bit silly. Many of the characters and episodes are just not believable (some are is "explained" later in the book, but much isn't and just remains unconvincing). It becomes more ridiculous towards the big ending. No real surprises, but if you don't expect too much, it passes the time on a long-ish journey

The book evolved in such an unexpected way. I was increasingly drawn into the story and the characters' lives.

Her voice is very pleasing and she does a great job of giving the characters emotion and dimension without being overly dramatic.

Sometimes we get caught up in finding books that will rivet us, or leave us with some insight within ourselves. But books just need to tell a story and entertain, and this one does both quite well. It was well read and had great dialogue that actually made me chuckle a couple times. The writing had hints of Philip K. Dick and wove a very intriguing story.

I hated to turn it off. I have over 300 titles in my Library and this is one of favorites. HIGHLY RECOMMEND!

What made the experience of listening to Flowertown the most enjoyable?

Just when I thought the story was being predictable, it went and proved me wrong. Great characters.

Yes, it was always action packed with surprises around every turn.

The story felt unfinished. I wanted another book, or at the very least, another chapter.

better than your average YA post-apocalyptic tale

This book was an unusual post-apocalyptic book for a few reasons. First, the setting is unusual. The action takes place in a small, intimate area - a small town in Iowa that has a chemical spill that causes it to be quarantined off for the rest of the United States. This gives us a nice dose of nostalgia for small town Midwest and a very perceptible and easily imagined feeling for the claustrophobia, powerlessness, and despair of those trapped for seven years in Flowertown. It also puts the action on a small scale so that it is easy to believe in the ability of a few to subjugate the trapped - by controlling the media, internet, cell coverage, and supplies that are allowed into Flowertown. We don't have to imagine a world changed immeasurably.

Secondly, the heroine. She is not a stunningly beautiful (but doesn't know it) kick-ass girl just waiting for someone to love her. She is a young adult - in her early 20's. She has flaws,and hides in a haze of marijuana smoke from most of what is happening to her. She does not have magical powers and was not destined for greatness. She is not trained in combat. She does not have two guys fawning over her in a cliched love triangle. In fact, romance plays a fairly small part in the story overall. Our heroine is reluctant and flawed and human, and most of all, relatable.

What we do get is a really intimate and scary medical thriller. We get a lot of backstory told in ways that are not big static info-dumps. We get a strong sense of setting and wonderful memorable details. We get characters making decisions and trying to figure out what is going on at the same rate as the reader is, so there is a lot of suspense and tension. The plot is action-packed and nicely reveal in a pace that keeps you on the edge of your seat. You aren't sure who to trust. The writing is sharp, well edited, and precise. It's got humor and sass.

The criticisms - okay, Guy is a bit too good to be true, He should have given up on Ellie well before the end. Bing and Ellie are a bit too precious in that John Green-esque dialogue way. They fly off the handle and then make up again and again. Rachel is a bit too good and pure and convenient to figuring out the plot points mid-book. Ellie stops smoking pot and overnight can run without hacking and gasping like a true pothead would have. It is stated way too many times how infrequently Ellie bathes and how filthy her clothes are. Ellie makes a leap of logic in two places that seem too convenient. The contaigen seems too easily controlled.

The audiobook is very well narrated by Tanya Eby.

This was a surprise as I had not heard of it before, and it was a perfect summer read.

What did you love best about Flowertown?

The best part about Flowertown is the protagonist, a smart-aleck named Ellie. I could really identify with her attitude and appreciated the humor her dialogue added to an otherwise grim story.

Tanya Eby did a great job performing the many characters. I liked her interpretation of Ellie and Rachel the best.

I was smirking while listening to this audio book. It's really clever.

This book was difficult to put down. From the very beginning, I connected with the characters and was involved in the plot. Great work, S.G. Redling! I look forward to more enjoyable books from you.

This was an enjoyable read with a great narrator. I was hooked and wanted to get to the bottom of what was going on in Flowertown. Not for those readers sensitive about marijuana use or language or some violence.

Almost Too Realistic View Of A Potential Future

This novel was a real blast of a possibly real situation that could happen at any time and not just in Ohio. Though some reviewers saw this as a YA future history, Elle is actually 33 - 10 years older than her room mate Rachael who comes across as a sweet kid just wanting to get out of the 7 year long isolation for a weekend in Vegas with her sister.

Ellie, the primary protagonist, and think Redding wrote her well...she is a person with faults: angry, at being trapped in a small town while she was visiting. She smokes dope--as do many of the town folks in order to overcome the nausea caused by drugs that are continually being tested on the citizens as well as the boredom of being trapped in a dead end job and subject to arbitrary rules set forth by the company who was attempting to remedy the situation they caused...there are no longer civil rights in PennCo.

The two male protagonists are also well written..I liked Bing, the town pot supplier and one of Ellies co-workers and Guy, Ellies main guy. I wish there was a second continuing book about the future of the people we get to know.

This is a good book, just as the title of this review states. Not fantastic, but good. A lot of the dialogue doesn't seem very natural, and the characters behave in ways that just don't come across as genuine, but overall the story did maintain my interest. Not a novel that I will ever listen to again, more than likely, but was not a waste of time. I know, not a glowing review, but it is what it is.

I am a reader that understands that not every book I read will be "the best book I've ever read"; I accept that, and can usually find redeeming values in each book I read. There are many redeeming things in is novel, as well. The story is a rather unique story in a world where there is a new post-apocalyptic type story every minute. I love these kinds of books, and it is always refreshing to find a new take on this genre. There were also very few characters in this story, so I really got to know those that were a part of the story. There could easily be a sequel.

A pretty good listen. Good characterization, especially the main character, Ellie, who was a real smart ass, and had lots of snappy dialogue. While the story is not supposed to be funny per se, there were a lot of funny one liners which added a dimension of fun to this otherwise very depressing and pretty creepy story. There is a well placed jolting surprise towards the end which came out of left field and had me reeling!

The narration was okay. Neither good nor bad, just okay.

Overall, I feel this book is a worthwhile listen, and I would be open to trying another book by this author in the future.....☺️