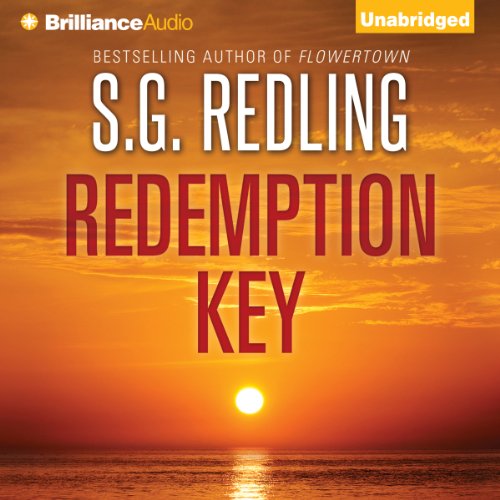 Her narrow escape from blue-eyed assassin Tom Booker has made former data analyst Dani Britton question all of her choices-like trusting "good guys" who carry badges. On the run and haunted by the government-sanctioned massacre of her coworkers, Dani finally settles in remote Redemption Key, Florida, at a bar where strong drinks and shady deals are the norm.

The bar owner, a local operator with a past of his own, gives Dani a job, no questions asked, and soon Dani's ability to "read" the sketchy characters doing business at the bar proves invaluable. The libations flow, and the Key's laid-back vibe and warm waters start doing their therapeutic work. But as the mercury rises, a twisted deal starts to go down-threatening to take Dani with it. Like sharks smelling blood, players on both sides of the law circle for the kill. And when charming apex predator Booker joins the frenzy, he may turn out to be the only one on Dani's side.

I have developed a real liking for Dani Britton, the protagonist in 2 of S.G.Redlings novels and I sincerely hope there are more coming.

This is a series that needs to be heard/read in order..there's a lot of history in book 1 that would be lost if you start with the 2nd book.

Dani is a plucky smart young woman who has moved to the Florida Keys to escape whoever is trying to kill her and her best friend.

Redling is a superior author IMO, I've just discovered her?/his? books and have enjoyed every one of them-especially Flowertown, which was an Audible Daily Deal a couple of weeks ago and turned me on to these novels.

Redemption Key is the second book in the Dani Britton series, and I think it is stronger than the first. The Florida setting fit the characters better than Washington D. C. did. This was a fun, taut thriller in which almost all the characters are grey - both bad and good, and you guess up until the very end who to trust or not. I appreciated how Dani survived the damage from the first book, and how much stronger she is in this one. The characters that run Jinkeys are colorful and interesting as all Florida crime novels should be peopled with. Fast, fun thriller with lots of action.

A "Daily Deal", knew nothing about the author or the book before listening.... which was probably my mistake. There are a series of books by this author, and I don't know where this one fits in, but it was obvious there was a lot of back-story about these much-wounded, bodies-covered-with-scars characters. The past was alluded to, but I never got over the feeling that I'd walked into the middle of a play.

It was well read and parts were interesting -- I could see the attraction -- but when I was an hour from the end, and had just listened to yet another set of paragraphs enthusing over Dani's body parts, most frequently extolling her exquisite legs, her "thin little arms" and her "tiny little feet", I decided I'd had enough. There's more to writing a "thriller" than endless descriptions of her body -- and everyone else's, come to think of it. Much ink was spend on defining, over and over again, everyone's body type, very very big, little teeny tiny, and in between. Seemed very strange.

So I never did really get into it -- it had great potential. I liked the location. But way too thin a story line to be compelling, and the characters never emerged from two-dimensional.

I tried to slug through this book. The characters were uninteresting and I didn't care about them. The story never developed into anything close to partially interesting. I finally came to realize, I was wasting my valuable time. I gave up and moved on to a more interesting book.

story was good but...

it was a good story. BUT ... there was way too much use of the "f..." word which does not enhance the story for it to be an excellent story.....that is why I just couldn't give it five stars.

"They Don't Always Get Their Man!"

I listened to book 1 first and that is a must or this book will not flow. Way too much info comes from book 1 and this book is only an extension of that one. This book did not hold my interest as it was a bit slow for me until the last 47 mins. then it became an OMG ending that stays with YOU. Even with the wow ending, I probably would not try this author again unless I loved the reader.

What other book might you compare Redemption Key to and why?

The ending is a bit like Phillip Margolin's After Dark and Margolin's ghost ship story, both excellent and a wow ending.

Have you listened to any of Tanya Eby’s other performances before? How does this one compare?

I have grown to like her as she has enhanced her male voice since reading as Tatiana Sokolov.

Yes, as it would play out better as a visual.

book 1 had a fast pace and this one had an excellent outline, but way too much laid back attitude for me that was not in keeping with book 1.

Listen to The Widow File before this book

Dani Britton continues her attempts to escape assassin Tom Booker by moving to the Florida keys (Redemption Key) and taking a job in a bar. This book is a continuation of The Widow File. The twist at the end earns it the 4th star.

Note to author: temperatures in the Florida keys do not reach 107 degrees F., not even close!

Non stop guessing, better than the first book! Old and many new characters show up in Dani's new life in the Keys. Random? On purpose? Has she been found? I thought i had it figured out a couple times, then went a different direction or new character added. Loved all the way to the ending(?) cant wait for her next adventure!

Great job by Redling on the follow-up book to The Widow File. Had mystery, suspense and plenty of gritty action! Loved the return of the main characters.
Almost didn't want to get to the end of the story.

Good story in spite of a dreadful reader

I was happy to catch up with Dani after the exciting first book. The reader is terrible and it detracts from the listening experience.