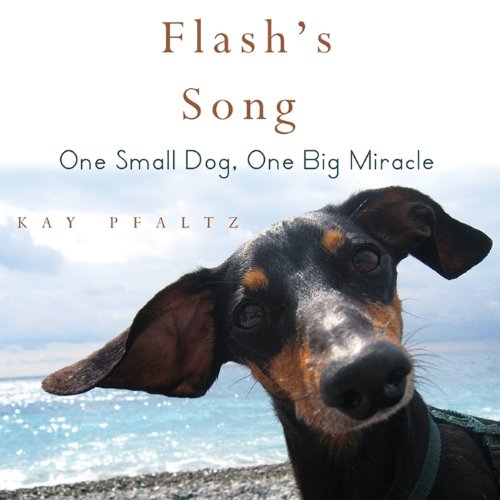 How One Small Dog Turned into One Big Miracle
By: Kay Pfaltz
Narrated by: Gayle Hendrix
Length: 7 hrs and 4 mins
Categories: Home & Garden, Pets & Animal Care
3 out of 5 stars 3.0 (2 ratings)

Skilled voice actor Gayle Hendrix, with her rich voice and empathetic intonations, brings Kay Pfaltz’s Flash’s Song: How One Small Dog Turned into One Big Miracle to life in this delightful audiobook, which tells the story of Pfaltz’s beloved dachshund, sadly diagnosed with an incurable ailment, and the ensuing resilience of the animal spirit.

Heartbreaking and heartwarming by turns, this audiobook will appeal especially to animal lovers, as Pfaltz reflects with great love on how pets can carry us through even the toughest times - and how sometimes it is our job, instead, to carry them.

For those who enjoyed Amazing Gracie or Merle’s Door, here is a completely new tale of a rescued dog who becomes the unlikely purveyor of a powerful gift.

What if most people have it wrong, and miracles are not the exception but the norm? Flash’s Song is the true account of how one person discovered the secret of miracles. It is a story of the power of laughter, the power of family, and, ultimately, the power of love to get us through life.

Freelance writer Kay Pfaltz was living a quiet, simple life with her three beloved dogs when suddenly her life turns upside down. Coming to terms with a failed relationship, she must now take her ailing dachshund, Flash, in for back surgery. But when the vet tells Kay that Flash’s problem is not a disc but in fact a tumor growing on his spine and Flash has, at most, three weeks to live, Kay is devastated. From here begins a journey of self-discovery and recovery that will open Kay’s heart to the greatest miracle of all.

Flash’s Song tells the story of amazing canine courage and remission against all odds. It is a ballad of love and redemption, and a moving account of how Flash’s three-week prognosis became five and a half miraculous months of learning, loving, and finally accepting.

Written in luminous prose, accompanied by poignant photos, and filled with keen insight into love, faith, and the power of forgiveness, Flash’s Song is not only a heartwarming ode to a little dog, but also a tribute to life and an invitation to cherish every moment of it.

What listeners say about Flash's Song

I LOVE a good dog story, this isn't one of them.

What would have made Flash's Song better?

It was quite unremarkable. I bet Flash was a great little dog that brought much joy to her and I'm sure she had a wonderful relationship with her dogs, but I kept waiting for something to happen to make it stand out, and it doesn't.

Would you ever listen to anything by Kay Pfaltz again?

No. She shouldn't pass her dogs off as service animals to get in places they shouldn't be.

She tried to make it interesting

Disappointment. As a healthcare professional, the author goes off into this weird science, and tries to pass it off as true.