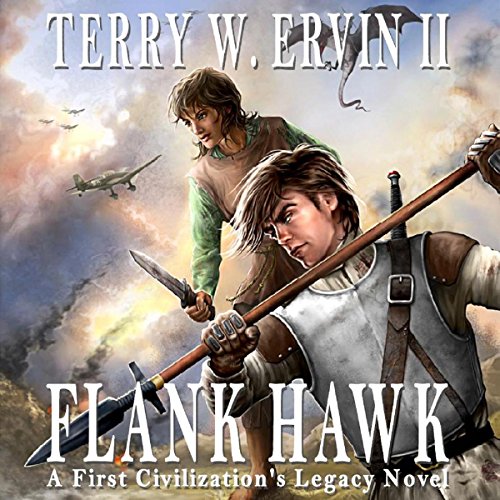 What happens when fire-breathing dragons battle Stukas for aerial supremacy over a battlefield? Can an earth wizard's magic defeat a panzer? Krish, a farmhand turned mercenary, witnesses this and much more as he confronts the Necromancer King's new war machines resurrected from before the First Civilization's fall. Worse yet, a wounded prince tasks Krish to find the fabled Colonel of the West and barter the royal family's malevolent Blood-Sword for a weapon to thwart the Necromancer King's victory. Flank Hawk is set in the distant future where magic exists and brutish ogres are more than a child's nightmare.

What listeners say about Flank Hawk

Terry Ervin is just crushing it for me. I started out in a Litrpg story of his called Outpost, and adored the book. I loved it. Then I read his novel, Relic Hunter and was amazed at just how flexible his story telling chops really were, and now he hits me with a fantasy novel that deals with undead and nazi planes and tanks. Wha-huh? Who the heck thinks this stuff up? I must say his imagination is fueled by Tolkien's sweat, Willy Wonka's blood, and Clint Eastwood's attitude. A cray mix to be certain, but a combination that makes for amazing possibilities.

Flank Hawk is an everyman. He's not a hulking hero or deadly warrior. He's just a guy swept up in circumstances that sweep him away from the life that he would prefer. Still, he makes due with his lot and manages to actually become someone of consequence. In this case, history isn't repeating itself so much as reinventing itself. Fantasy and Science begin to gel together, leaving the world a far different place than it had been. Flank Hawk has the honor of being the one has to bear the responsibility of stopping the war.

One little issue I did have was with the character of Lily. FH is there to help and protect her, and there is literally no sexual tension between them at all. I would have liked to have seen some interest, some spark, because if you consider that FH has been celibate for a while it is more than likely that he might do some initiating something with her. You might argue that he has a Gomer Pyle attitude, but I never really got that feel from him. Even if he was pious and holy he would still be moved when she undressed. Aside from that the action alone makes this book worth it, but then you do have the characterzation and the whole concept of fighting orcs, zombies, and panzers all at the same time. Good stuff.


Michael A. Slusser does the narration, and I'm glad to see that Ervin rotates his readers out for various series. This give each series its own tone, its own voice, and keeps it distinct from the other works he has done. Slusser comes in as a favorite of mine. I hadn't heard him prior, but I really enjoyed his work, voice, and the emotion he provided each character. I never noticed any sound issues, and felt that I could happily listen to him for another few novels.

This looks to be a solid and entertaining series. PLEASE DON"T MISS OUT ON IT. Even though I did receive a promo code for this review it in no way influenced my considerations of the material, and in fact, inspired me to be more honest. Getting a code generally makes me harsher as a reviewer as I am more often concerned what someone like Me will decide based on my review.

Although I wasn't much a fan of the performance, it didn't make me want to stop listening. The story was intriguing and characters vivid. Not your average zombie book by any stretch. Good hooks throughout. Will continue with the series

Bearing in mind this is the author's first outing, there are some interesting sub plots here, and a curious link to the origins of this Fantasy universe. I won't say more, as don't want to spoil it for you. Despite a very slow start (almost the entire first half of the book) to the character and plot development, things do start to flesh out in the second half. I have to say, several times during the early stages, I nearly abandoned this book...but I'm glad I didn't. I'm not saying it's one of the best Fantasy novels I've ever read, but it certainly had enough to make me interested in the second in the series. I'm hoping the author's learning curve will continue though, as I will not be happy with more of the same. I found the first half to be rather two dimensional, and as a result, I had very little care for the well being of any of the characters, including the hero's mentor, Road Toad, whereas normally, such a role would generate humour, emotional depth, and a certain tutoring role, all of which were lacking. The battle scenes were rushed, and almost no information about the terrain or the character of creatures were given. Very simplistic battle tactics, and for great sections I was wondering why I was continuing. This definitely changed around halfway through the book. The author started to pace himself, taking time to describe more of the surroundings and character emotions. This made all the difference. If I had one more criticism, I'd say that the final half an hour, especially the final 10 minutes, were horrendously rushed, undoing some of the good work the author had done in the final half. I hope, when the second book does finally make it to audio, that the author paces himself as he did in the second half, and works on the character development, as I need to care about the characters I read about.

Would you be willing to try another book from Terry W. Ervin II? Why or why not?

I would be willing to try another by this author, as, unlike a lot of Fantasy novels, his books are not quite as long. If I find myself tiring of it, I know I haven't a huge book to get through...although I have no clue how long the second book will be. Based on the first book, provided he has worked at his character development, terrain description, fighting descriptions, and general surrounding descriptions, I feel sure I'd give him another go.

With regards to the narrator's performance, he wasn't great, without being particularly bad. He was a good enough reader, but I felt he lacked natural dialogue phrasing, and read the battle scenes without any light and shade. Changing the pace of reading and adding more tonal changes would have lifted this book as I truly did have a problem working out whether it was the book or the reading that might have improved the first half. In the end I decided it was a mixture of both. I believe this may be the first read for this narrator, so I'm sure he'll improve as he goes along.

Do you think Flank Hawk needs a follow-up book? Why or why not?

Hmm...does Flank Hawk need a follow up? I'd say it doesn't 'need' one, but if one turns up I'd give it a go...and hope that the books strongest characters are retained, but with more development all around, on plot, character, and terrain.

Keep going Terry, but please try to heed what I've said. I believe your ideas are good, but the writing style needs to find it's way. I would say that from the point when the hero starts his main mission (trying to avoid spoilers here), and about 20 mins before the end, was the strongest section of writing, and hugely improved over the first half. I would urge you not to rush the final wrap up as you did in this book! I know an author can be impatient to get the story down, but atmosphere's need to be created and worked on, and for a large portion here, atmosphere was definitely limited. I do like the ideas though.

Tolkien for the undead genre.

Would you consider the audio edition of Flank Hawk to be better than the print version?

Read the book. I had to imagine the characters and keep them straight... the usual. But having the voices live put this a step up.

Krsh makes the story carry. From new blade to tried warrior, pushed the limits with the same caution and fear each soldier faces.

What does Michael A. Slusser bring to the story that you wouldn’t experience if you just read the book?

Michael is my son. Don't laugh just yet. I have often heard him deliver speeches, lead assemblies, teach as a professor of English, and even sing a few notes from 'Fantom

I'm into Tolkien,Trilogy, and even real war stories. Not for the gore, but the valor and glory. This book has it, with no punches pulled about the foibles of men and battle.

Michael, I didn't check with you first. But you have done Terri W. Ervin III a real boon. Looking forward to the next from both of you.

In a heartbeat! Excellent fantasy!

What was one of the most memorable moments of Flank Hawk?

Many, the book was very well written

Which character – as performed by Michael A. Slusser – was your favorite?

I felt the narrator did an outstanding job on all characters

Would have been nice, but too many things to do. This was a great story to relax with at the end of the day.

Bravo to the author and narrator

Swords and sorcery vs Nazi technology and zombies!

What did you love best about Flank Hawk?

I love the combination of the dragons and WWII planes. The idea of an army of zombies supplemented with Panzer tanks, goblins, orgres, and demons is also a fantastic use of many of the common elements seen in popular books today.

What other book might you compare Flank Hawk to and why?

The general feel of the book reminds me a bit of the old DragonLance Chronicles.

I don't think I will ever listen to an audio book is a single sitting. This book made my commute a whole lot more enjoyable and I had listened to it in it's entirety in about 3 days.