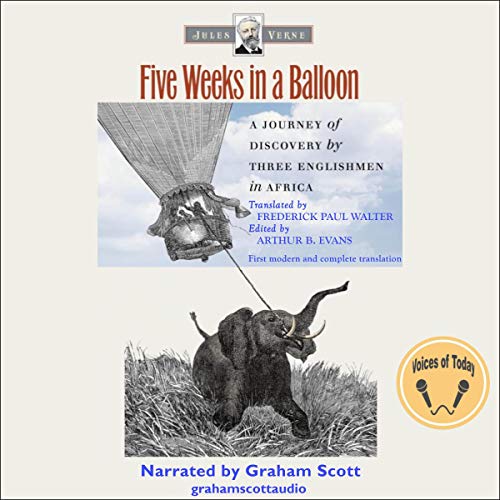 Five Weeks in a Balloon

Five Weeks in a Balloon

One of the great "first novels" in world literature is now available in a complete, accurate English translation. Prepared by two of America's leading Verne scholars, Frederick Paul Walter and Arthur B. Evans, this edition honors not only Verne's farseeing science but also his zest, style, and storytelling brilliance.

Initially published in 1863, Five Weeks in a Balloon was the first novel in what would become the author's Extraordinary Voyages series. It tells the tale of a 4,000-mile balloon trip over the mysterious continent of Africa, a trip that wouldn't actually take place until well into the next century. Fusing adventure, comedy, and science fiction, Five Weeks has all the key ingredients of classic Verne: sly humor and cheeky characters, an innovative scientific invention, a tangled plot that's full of suspense and surprise, and visions of an unknown realm.

What listeners say about Five Weeks in a Balloon

Graham Scott Audio has released an audiobook of Jules Verne's first novel, Five Weeks in a Balloon. That by itself isn't unusual; what makes this special is that it uses the most recent and best translation of the novel, the one by Frederick Paul Walter, edited by Arthur B Evans, originally published in 2015 by Wesleyan University Press. It's almost impossible to find a Verne audiobook that uses a good translation, so on that score alone, the producer deserves kudos: all the more so because translator and editor are given credit on the cover.

The book is narrated by Graham Scott. (Going out on a limb, I'm guessing he's the head of Graham Scott Audio). He's an engaging and brisk narrator, moving quickly through the book’s 44 chapters. He has a particularly good time with the Scottish friend and outdoorsman Dick Kennedy. His energy doesn't flag even when working through the seemingly interminable list of earlier explorers of Africa. (This is Jules Verne, after all: lists of names have to come into it somewhere.)

The book centers on a small group of explorers led by Dr Samuel Fergusson. The plan is for the expedition to fly east to west across Africa, in the same direction as the equatorial trade winds; the balloon will rely on those winds to stay on course. Fergusson devises a way to heat and cool the hydrogen gas in the balloon without exposing it to an open flame. As it expands or contracts with the heat, the gas will move the balloon up or down — useful if a mountain peak is in the way, or if a different wind current needs to be found.

(Verne is sometimes described as a prophet, but his imagination wasn't infallible. When one character expresses anxiety about the hydrogen “powderkeg” above their heads, Fergusson assures him that any flame would burn slowly and would still allow them to descend safely. In other words, Verne didn't predict the Hindenburg. In his defense, though, the translator’s introduction points out that some investigators have concluded the explosive nature of that fire was due to something other than hydrogen.)

The explorers will cross the middle of Africa, from Zanzibar to St Louis, a city that straddles the mouth of the the Sénégal River on the western coast. It's supposed to take no more than a week. But because this is an adventure story, and the explorers consequently have adventures, the journey takes 5 weeks — hence the title. They are battered by storms, threatened by natives, attacked by vultures, even overtaken by locusts. Their balloon is damaged, the gas leaks, they begin to wonder if they'll make it to the west coast.

The characters are not psychologically deep, but they are sharply drawn and completely believable. The explorers include Fergusson; his friend Dick Kennedy, a blustery Scot and an expert hunter (he tries but fails to stop Fergusson's plan, which he thinks is insane); and Joe, Fergusson’s manservant, who like many of Verne’s servants seems to know how to do everything. Joe, an irrepressible optimist, has a unique perspective: after watching the locust horde strip the ground below them bare, he compares them to “airborne shrimp.” But he's no caricature. On more than one occasion, the “gallant” Joe is prepared to make the supreme sacrifice to save his companions.

There are many such trios in Verne novels, and clearly he found it a comfortable pattern from the beginning.

Other events foreshadow later novels. At one point the explorers are becalmed in the desert. The description of their thirst and despair is harrowing and is every bit as compelling as a similar scene in Journey to the Center of the Earth. Verne could be sadistic toward his characters at times: in Twenty Thousand Leagues under the Seas, it's oxygen that's in short supply. And as in the other two novels, the one who is closest to perishing is rescued by his comrades, who give him the last tiny atom of the life-giving substance from the bottom of the last container.

The fly in the ointment is Verne's patronizing attitudes toward the native peoples of Africa. He was no fan of colonialism, but he swam in that sea and internalized some of those values. There are times when he describes the African people with admiration, but he also uses the word “savage” on a regular basis, and the behavior he describes is often violent, barbaric, and superstitious. Yet a dying missionary rescued from cannibals by the travelers speaks of his captors with respect and devotion. The two attitudes exist in an unstable and uncomfortable relation to each other.

There are other areas where there's an uneasy balance. The explorers kill a magnificent elephant and admire its grandeur — just before they cut it up and eat it. To his credit, Fergusson, like Captain Nemo after him, is strongly opposed to hunting just for the sake of killing. But Verne describes the hunt itself with relish.

It's impossible for me to read a Jules Verne novel without breaking out a map. Far more than being the “father of science fiction,” he's the originator and practically sole practitioner of a genre that can best be described as “adventures in geography.” The problem, of course, is that maps have changed a lot since the novel was first published in 1863, probably maps of Africa more so than maps of other continents. So following the route of the adventurers can be a challenge. Hint: do a web search for “five weeks in a balloon map”. You should be able to find one “prepared by LJ Hetzel” specifically for this novel. A lot of it doesn't match our current knowledge of African geography, but it shows you what Verne thought was there.

Apart from the reservations expressed above, the book is a grand adventure and listening to it is a treat. Graham Scott is a superb narrator. I hope he narrates more Verne novels, especially if he continues to pick excellent translations like this one. It's a great fit.

But do yourself a favor after you've listened to the audiobook. Go out and buy the book itself — but make sure it's this edition. Doing that will give you the translator’s excellent introduction and notes, the wonderful illustrations reproduced from an early French edition, an annotated list of explorers mentioned in the text, and a bibliography of Jules Verne in English that sorts out the good translations from the bad ones.