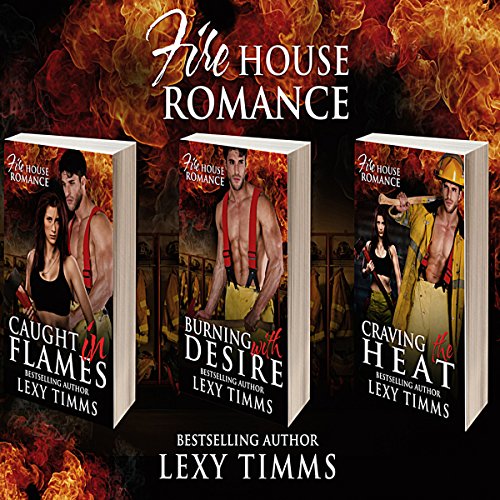 By: Lexy Timms
Narrated by: Stacy Hinkle
Try for £0.00

To Rebecca Taylor, her job had become simple. Sort of like lather, rinse, repeat. She travels throughout the country certifying fire station equipment. She's a fully certified fire fighter, but her area of expertise is in testing out new equipment that will save lives. She lands up at Station Five in Phoenix, Arizona, the one place she's been trying to avoid.

She grew up just outside the city, along with the newly hired sexy lieutenant, Sam Evans.

He was best friends with Becca's brother, before he died in a fire almost a decade earlier.

Heat runs ramped in the city of Phoenix - desert sun, burning buildings, and the undeniable hot attraction between Becca and Sam.

When the past begins to appear in familiar fire patterns, Becca is startled to realize there may be an arsonist in the city. Her brother Corey's death had been ruled an accident. Will she be able to prove it was murder before the arsonist comes looking for her?

This is a brilliant storyline. There’s lots of action and adventure in it. Good characters that are fun and strong. Great twist at the end. Excellent performance from Stacy.

This story was thrilling, suspenseful and heart breaking. I loved it so much. Lexy Timms knocked it out of the park with this story

An Emotional Rollercoaster Ride to healing an love

This set will take you on an emotional journey of Rebecca Taylor as she's a firefighter but spends her time traveling from firehouse to firehouse demonstrating new things to help firefighters.She's been avoiding her hometown too many memories of her brother Corey's death when they were teenagers.An Sam she's always wanted Sam Evans to be hers.This story from each book will keep you on the edge of your seat and the characters will captivate you.Rebecca finds a white rose burnt along the edges on her brothers headstone after she dozed off after talking to him.It kind of dreams her out.She goes to the station where she's going to be showing the new blue tooth technology to help firefighters stay in contact.Then she sees him Sam the man she's never been able to forget.her brothers best friend.Sam has always had a thing for Becca but Corey warned him off .He warned a lot of guys off his sister.But Sam's gone an he still cares about Becca.What Corey didn't know is Sam may have played around but he would never treat Becca that way he always wanted to make her his wife one day.As the arsonist continues to set fires an kill privilEges wants to get involved trying to catch him.There are so many twists and turns to these stories you won't be able to stop until the very last page.Will Sam find Becca alive ?Will he progesterone wrong that she isn't dead?Or will he go off the deep end thinking she's still alive?I love the way this amazing author brings the characters to life before your eyes an you can feel their emotions an their pain.I can hardly wait to see what's next by this multi talented author.

Dark Romance is the right genre

I received an audio review copy of the book. The author is one of my favorites. She did not disappoint. Her heroines are normally strong women who have just enough flaws to make them relatable. Becca was the first heroine I just wanted to slap and tell her to wake up. Not every heroine needs to be strong. The stories are well-written and leave you waiting for the HEA.

It’s ridiculous I made it to the end of book one. Over performed. Under delivered. I am willing to overlook improbable details that allow a story to develop, but this asking too much.

WOW. Second time around listening with great narrators. Awesome with great story line. Recommend to all.

The story was so, so. it had good premise but sometimes I just cringed at the description of how things were handled by the fire and police departments. A little unrealistic at times. Narration was OK but not nut difference between male and female voices. Glad it was an AE choice.

What would have made Firehouse Romance Complete Collection better?

It was too dark. I hated that she slept with the villain and the hero.

Has Firehouse Romance Complete Collection turned you off from other books in this genre?

I loved the love between Sam and Becca ! This story brought tears upon tears to my eyes. I was captivated from the beginning and was kept enthralled until the very end ! I was never able to stop listening even for a second. I don't think I'll ever be able to forget this book and will probably listen to it again and again.

Should be one book

This should have definitely been a one book series, the story drug out way to long.

What made the experience of listening to Firehouse Romance Complete Collection the most enjoyable?

A good storyline, the story caught my attention in the first chapter.

I had no favorite characters.

I like that I could tell which character was talking in the way she changes her voice for each. It makes the book more like a show and she brought the characters to life. I would puchase more books narrated by her.

Love the story and would purchase more books from Lexy Timms. I would also like to add that I am one of those people that if a book does not get my attention in the first couple of chapters I will not read it.