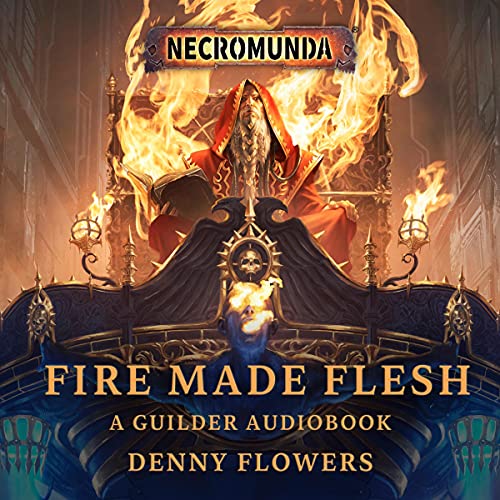 By: Denny Flowers
Narrated by: Joe Jameson
Try for £0.00

Dark secrets lurk in the Fallen Dome of Periculus, and Tempes Sol of the Guild of Light seeks them out to cement his place in the underhive - if he, and Hive Primus itself, can survive what he unleashes.

Listen to it because: venture into the darkest reaches of the underhive with a soul who seeks to bring light and forge his destiny, and experience the horrors that follow.

The story: the Fallen Dome of Periculus, once a hub of sanctioned commerce and illicit dealings, is lost no more...and the prizes it holds are sought by noble, Guilder, and hive scum alike.

For Tempes Sol of the Guild of Light, Periculus is an opportunity to not only prove his superiority over his superstitious peers but also to see the end of Lord Silas Pureburn, Keeper of the God-Emperor’s Eternal Flame, bringer of fire and faith to the rioting masses, and his most hated rival.

But Periculus did not fall by chance. Dark secrets lurk in its shadows - forbidden archeotech, twisted creatures that feast on flesh, and an insidious rage afflicts all who dwell inside its confines. As madness and violence erupt within the fallen dome, the legacy of Periculus threatens not only to consume the underhive, but ultimately Hive Primus itself.

What listeners say about Fire Made Flesh

I enjoyed this book, it isn’t my favourite Necromunda book that is Kal Jericho and that is because it had all of the usual grim dark horror but it also had humour which this book lacked, that’s just a personal request, I am sure many would prefer the book as is, good read but could have been better, narration was good

Necromunda at its best

I’m always a fan of the books that explore the 40K universe away from the battle lines and this may be the best yet. Denny Flowers has done a fantastic job weaving in all the gangs and guilders into a story that rips along like a Cawdor chain glaive. Joe Jameson’s narration is perfect. He breathes life into the characters. As a combination, it’s an excellent Audible experience whether you are a longtime fan of 40K or someone just dipping their first toe into that world. Highly recommended.

Top 5 of all the Necromunda books I've read.

excellent complex story that weaves together existing characters and story arcs quite successfully. the decision to have an honest truthseeker and a man of science in the story was fascinating.

Fantastic story surrounding surrounding the dealings of the various merchant guilds in necromunda. The narrator has some really interesting voices unfortunately fortunately hes somewhat inconsistent with them isn't with them and it is sometimes difficult to tell who is meant to be speaking to be speaking which is the only reason he didn't get 5 stars.

Couldn’t really take interest with the number of characters being introduced without some center of focus. Too much jumping around and the barrator’s voice was rather boring. The book might be more interesting to read than listen to.

Iz good. Got fire and Magiks and other fun things that people like to read about.

could have been great

I really enjoyed this book but the ending just felt rushed and unsatisfactory, maybe it's gonna be a series.

Interestin start but ending is a mess

Interesting, but the second half of the book is a mess, also most feels like it was rewritten or extremely rushed