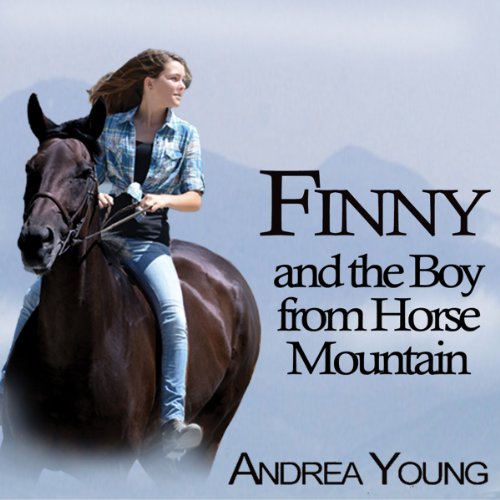 Finny and the Boy from Horse Mountain

By: Andrea Young
Narrated by: Luci Christian Bell
Try for £0.00

In this classic tale of girl-and-horse-against-world, 15-year-old California girl Finny adopts Sky, a skinny, untrained, bad-tempered horse with the intent to train him for show jumping - all with the help of a 16-year-old runaway, Joe. Narrator Luci Christian Bell brings a youthful vigor to Finny's words, enlivening her character with a cheerful go get 'em spirit, and vividly channeling her courage when Joe is kidnapped, with only Finny and Sky to save him. An uplifting, empowering story about a young girl's perseverance in training and audacity in love, Finny and the Boy from Horse Mountain is a must-listen for any teen who adores horses.

A thrilling novel for tweens and teens.

Against the backdrop of the high-stakes and intensely competitive equestrian sport of show jumping, Finny, a fifteen-year-old girl in California, adopts an emaciated, untrained horse without her parents' knowledge. Soon after adopting Sky, Finny meets Joe, a sixteen-year-old, who has run away from his cruel uncle in Montana. His love for horses and desire to be a trainer matches Finny's dream of competing in the show jumping arena—against rich girls on fancier horses—and together, they train Sky to become a first-rate show jumper.

But the path is fraught with danger. Sky is not like other horses and is so destructive and difficult he gets them kicked out of the barn where Finny has been working and training. Helped by a kind woman who owns a horse rescue, Joe is able to prove both his and Sky's incredible talents. When Joe is kidnapped by his violent uncle, Finny and Sky are the only ones who can save him. In a breathtaking finale, Sky and Finny must enter the underworld of the rodeo circuit, an after-hours, illegal race, where they will risk their lives to save the boy they love. Young demonstrates a masterful ability to set a breakneck pace and keep it up until the end of the book. Finny and Joe are enduring characters who are sure to appear in upcoming sequels.

What listeners say about Finny and the Boy from Horse Mountain

fantastic loved every minute, listened to it about 20 times now and still beautiful story