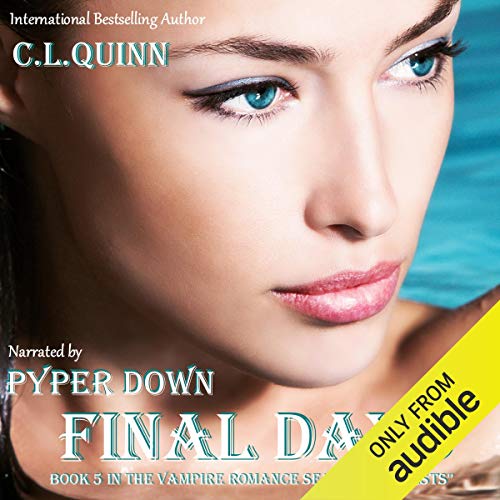 By: C. L. Quinn
Narrated by: Pyper Down

Love at first sight doesn't exist...right? So how could Alisa explain the instant intense attraction to a man she collided with on a lovely night in Paris at a streetside café? She was dying, a diagnosis that left her with perhaps three years left in her life...maybe that was why. Whatever it was, she wanted him and there was no reason not to take this beautiful man and find pleasure she has never known. This journey she was on was a final trip to places she had always loved in this world. To experience life as much as possible while she still could. She's never done anything like this before, and it turns out to be the memory of a lifetime. The only sorrow she felt while leaving that next morning, was that she may have found love, too late.

Koen's been alive for over a thousand years. This past year of his life has been wonderful. He couldn't imagine anything better. Until he has a chance collision on a trip to Paris with blue eyes that burned into his soul, and stayed there. After the most incredible night of his life, she disappeared.

He didn't know she was dying. She didn't know he was vampire and could save her life. Would Koen find her...in time?

This fifth in the series about First Blood vampires is wonderful on its own, but follows the fourth book in the series closely, so listening in sequence will bring greater connection with the story and characters.

true love has no ending

Where does Final Days rank among all the audiobooks you’ve listened to so far?

neither gave up on the other.

when he found her in the warehouse.

when he found her in the warehouse

If you could sum up Final Days in three words, what would they be?

What was one of the most memorable moments of Final Days?

When he finds Alisa finally!!

I really like Pyper...she is the queen of accents!

There were many in this one...this book really pulls on the old heartstrings!!! I think my fave was when he finally finds Alisa, and she can barely speak...and she says I love you!

Just wow...this was my fave of the series so far...Koen and Alisa are just meant to be...I was a bit confused with some of the accent changes for Koen and Tamsen...but I got over it quickly...This book had like 3 story lines....the main one being Koen and Alisa...he finally finds her and they get the chance to fall in love...Jacob, Starla, and Ahmos almost dont get to have there son...and Tamsen learns about her evil twin....no wonder she was so insane...I really like Tamsen's character...I am glad they decided to help her...she has turned into a very important part of the family!!!

I LOVE THIS SERIES SO MUCH!!!

I am really excited about this original series! I love the fact that evil is evil no matter what species & the vampires being earth guardians whom care for mankind & the future of earth

Quinn you did it again. I hope this series never ends. This story is so beautiful
I hate to get to the end. The narrator throws in excellent nuances to

great story and this is one of my favorite narrators. CL Quinn does it again!

The author has written another brilliant story. The story is written to pure perfection. I also like that the author includes sex in the story but it doesn't take over the entire story, nor is it nasty sex as some books contain. I really hate listening to those audio books. The story is one that sucks you in and you can't get enough. I was totally immersed in this story and I couldn't make myself stop listening until the story ended. I'm now listening to the sixth book, Days of Redemption.
The narrator Pyper Down does an amazing job at sucking you in. She's very gifted and the talent she has shows. I love the distinguishing accents she gives all the characters, especially the men. I was able to know which character was speaking because Pyper is that darn good at what she does. I highly, highly recommend that you give this series a try. I guarantee that you'll enjoy it so much you'll immediately start downloading the next book in The series before The one your listening to ends. I received this audio in exchange for an honest review.

Final Days, Book 5 of the Firsts series (First Blood Vampires) by C L Quinn. This book picks up where book 4 left off. We start out with Coen in Chicago as he accidentally bumps into Alesa and it's love at first sight! Coen, who is so thankful for finding his sole mate and Alesa, who is terminally ill with A.S.L. (Lou Gehrig Disease) and says why not have a fling with a stranger. Off on the other side of the world is Jacob and Starla. Starla is pregnant with a first blood vampire baby by Amos, but in love with another man Jacob. We also have Wyndari who really wants Amos so badly, but he won't look at her as he still pines for Starla, so Wyndari sets out to kill her Starla off. You won't believe where this story will take you. Why oh why couldn't I be a vampire or at least have me a vampire of my own?
Once again, C L Quinn has out done herself in his series! The plot is outstanding. I was caught up in book & stayed that way thru the entire book! I laughed and I cried (a lot) as I listened to this story. I just love this series so much! So much emotion, love and sex all wrapped up in this tale with humor, adventure and danger too! Never a dull moment in the vampire world!
The author did an fabulous job as always in this book. I am so hooked on this series. The narrator Pyper Down is once again a perfect storyteller with all of her accent's and multiple voices. It is like I am listening to a real movie! Her accents so so authentic!!! Together to two ladies are explosive!I hope this series never ends!

If you haven't already listened to the other exciting books in this series then I wouldn't recommend starting here as it's about much loved characters and a continuation of plots from other books so you'll be totally confused. But, if you've already discovered and love them all then you know just how well CLQ describes the Vampire lore, exciting scenes, imaginative plots and wonderful characters.

This listen is packed full of action, danger, a sweet but very sexy romance, an evil, bitter and slightly mad First Blood female that causes havoc and heartbreak wherever she goes and an OMG WTF speechless heartbreaking twist that'll bring tears to your eyes.

Told from various POV's by the talented voice of Pyper Down.

Worth a credit? Lots of nail biting drama that'll have you on the edge of your seat, a twist or two and a tender doomed love story so, as a PNR lover, it ticks all my boxes and YES another creditworthy listen.

Believable relationships, though the nonexistent PTSD is questionable with the time and conditions of captivity. Why Coen is still blameless for his treatment of his daughter's mother is beyond me. He was originally a brute and somehow became a gentle nice guy? Did I skip a book or something?